Who’s to Blame For the Cowboys Heartbreaking Loss? 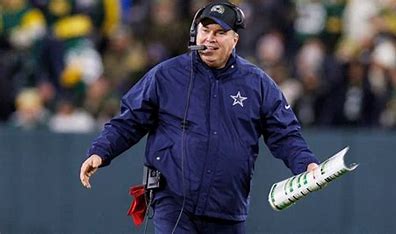 HC Mike McCarthy did not have an ideal homecoming back at Lambeau Field on Sunday evening. The Dallas Cowboys were defeated by the Green Bay Packers 31-28 in overtime. This was a game that the Cowboys let slip out of their own hands.

Going into the fourth quarter up by at least 14 points the Dallas Cowboys had a record of 195-0. Aaron Rodgers and the Packers handed them the first loss.

Since the game ended, many fingers are being pointed to who’s to blame for the loss. Many Cowboys did not have their best game on Sunday, some questionable play calls, and some bad officiating all played a part in the loss. Here are some reasons why the Cowboys could not get a win in Lambeau:

The Cowboys’ defense gave up 207 yards and one touchdown on 39 carries on Sunday. Dallas’ run defense has been an issue and weakness all season and the Packers exploited it. They are giving up an average of 143.1 yards per game on the ground which is the fourth worst in the NFL. If the Cowboys cannot stop the run, teams will continue to run all over them.

The Cowboys let rookie WR Christian Watson have the best game of his career so far. Only on four receptions, Watson had 107 yards and three touchdowns. This is inexcusable. Watson has struggled all season so far and his breakout game is against the Cowboys’ secondary.

In the past two weeks, the Cowboys have given up 29 points and 31 points to mediocre teams. In the first five weeks of the season, the defense did not give up more than 19 points in a game. There certainly had been a drop-off from a defense that was discussed as one of the best in the NFL. DC Dan Quinn has to make some adjustments to get the defense back to how they were playing to start the season.

The Cowboys’ defense had numerous opportunities to put Sunday’s game to rest in the fourth quarter if they could get a stop. The biggest one might have been when the Packers were forced to a fourth and seven and scored a 39-yard touchdown when Rodgers connected with Watson on a simple crossing route. If they get the stop, the momentum certainly could have shifted in Dallas’ favor.

I want to start this reason off by saying, refs never truly decide a game. Each team has opportunities to put a game to rest throughout the game but sometimes does not capitalize. So, I am not putting the loss just on the refs, but there were some bad calls and no calls on both sides.

On the Cowboys’ final drive in overtime, there was a no-call defensive pass interference on Green Bay’s Jaire Alexander where he tackled Ceedee Lamb before the ball got in him on a third and four to go. If that flag was thrown the Cowboys have a new set of downs and are inside the Packers’ 25-yard line with chance to win the game. So, that does change the whole game but as I stated, it does not simply decide who wins or losses. The Cowboys are at fault full heartedly.

But it does lead to the question, why did the Cowboys not run the ball on third and four if they knew they would go for it on fourth down regardless? It’s truly a head-scratcher, but that is on McCarthy and OC Kellen Moore. RB Tony Pollard was averaging 5.2 yards per carry in the game.

Dak Prescott completed 27 of 46 attempts for 265 yards, three touchdowns, and two interceptions. Prescott did not look his best on Sunday. He missed numerous throws that he should be completing as a starter in the NFL. His two interceptions thrown were also costly with one being in the red zone after the defense caused a huge fumble. Even if his receivers are more at fault, he still threw in tight coverage. Both turnovers also resulted in touchdowns from Green Bay.

Dak has to improve his accuracy and decision-making for this team to go deep into the playoffs. Dallas did not look like a playoff team on Sunday. I expect Dak to come out next game with some extra motivation to make up for this heartbreaking loss.

Losing to a team that was on a five-game losing streak and were down numerous players certainly is gut-wrenching. These types of losses cannot happen. As a Cowboys fan, going into Lambeau Field against Aaron Rodgers usually ends badly, and it did once again.

But to look on a more positive note, maybe they needed this loss. Each week the Cowboys are discussed as one of the best teams in the NFL but this loss could certainly humble them. I have no doubt McCarthy will light a fire under them this upcoming week. The Cowboys will have their hardest test of the season against the hot Minnesota Vikings. If the Cowboys could come out with a win, it will turn everyone’s perspective about them right around again.

There are many issues the Cowboys need to address as soon as possible. One is acquiring another wide receiver. It has become very evident that Dallas needs another playmaker on the outside. Gallup has not looked himself so far since returning from his ACL tear that happened last season. Jerry Jones should be offering Odell Beckham Jr. whatever contract he is looking for to get him in the building.

Another issue that needs to be addressed is the defense. The Cowboys’ run defense struggles week in and week out. If they have to run a different scheme or put another player in the box, something has to change. Also, the Cowboys need a corner to step up outside of Trevon Diggs. It’s inexcusable for Anthony Brown, Daron Bland, and Kelvin Joseph all to struggle holding down a struggling rookie receiver in Christian Watson.

I’m looking forward to see how the Cowboys will bounce back this week against the 7-1 Minnesota Vikings.