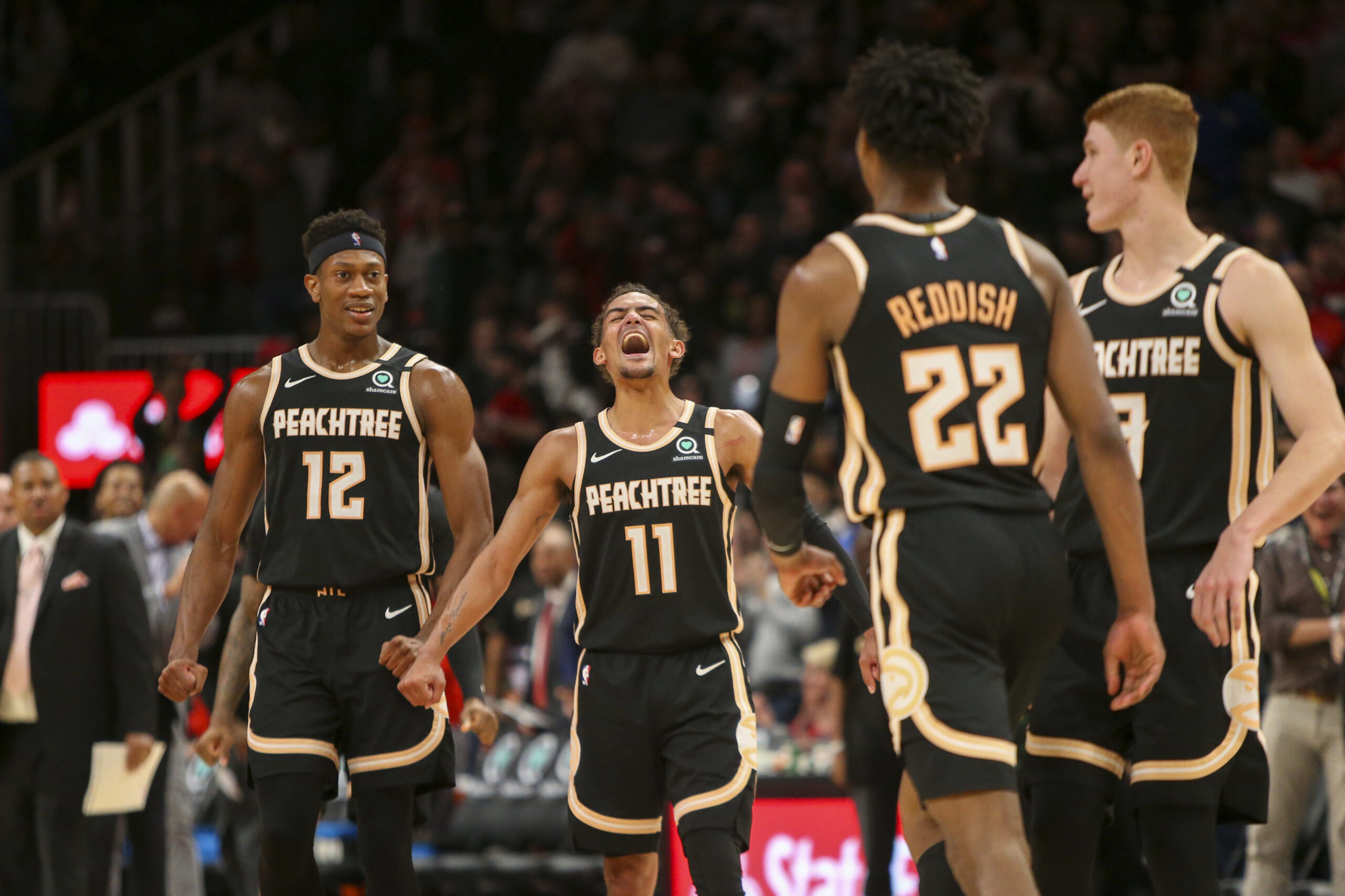 For the Atlanta Hawks to triumph over the Eastern Conference, they must develop their young bench into the superstars many expected them to become.

The Atlanta Hawks made big moves this offseason by extending Trae Young and John Collins. Each received 5-year deals, with Collins getting $125 million, while Young’s is a max contract worth up to $207 million. In doing so, they have restricted their offseason spending and now must rely on in-house talent. However, they already have an abundance of talent to choose from. Since the infamous 2018 NBA draft when they traded Luka Doncic for Trae Young, the Atlanta Hawks have landed several big prospects. They currently hold 7 players previously ranked as top-75 high-school recruits. Here is a year-by-year breakdown.

The Atlanta Hawks Wished They Had a Deeper Bench

The Hawks’ 2021 postseason run was unexpected, to say the least. Halfway through the season, the team looked to be on the outside looking in. However, they overcame a ton of adversity and made it to a 6th game in the Eastern Conference Finals. Furthermore, with Giannis getting hurt, and Young returning, many thought they had a serious chance of going to the NBA Finals. However, their bench really let them down. It was not just the young guns either — they simply had too few able-bodied players to field a competitive playoff roster.

Of the five players who could have helped, only two really did so. Sure, Okongwu served as a viable backup to Clint Capela, but not to the level of a 6th overall draft pick. Huerter was dominant against Philly and almost single-handedly won them Game 7. In the next round, though, his luck had run dry as he shot an abysmal 33.3% from the field and 26.5% from deep.

Nate McMillian attempted all sorts of different strategies and lineups to counter the Bucks’ hot shooting. One risky adjustment was playing Cam Reddish. After over four months without playing time, Reddish appeared in Game 4 of the ECF. His spark off the bench on both sides of the floor gave the Hawks a much-needed boost. However, they still desperately missed De’Andre Hunter’s defensive integrity, but his return was not forthcoming due to a knee injury.

If Huerter could have kept up his incredible game 7, or if Reddish was more consistent, or if Hunter played even a little, the Atlanta Hawks 2021 postseason could have gone very differently.

Other Offseason Pickups for the Atlanta Hawks

The Atlanta Hawks offseason was highlighted by their two extensions, but they made a few other key acquisitions too. In last year’s free agency, Atlanta boosted their scoring by signing Bogdan Bogdanović and Danilo Gallinari, but it cost them monetarily and defensively. Both are offensively minded players that each signed for over $18 million a year. The Hawks held the 18th best defensive rating in basketball while averaging the 24th most steals per game. Therefore, the focus for the remainder of Atlanta’s offseason was to clear some unneeded cap space and to find lengthy, active defenders.

To do so, the Hawks traded Kris Dunn and his $5 million dollar contract. In return, Atlanta received Delon Wright from Sacramento. Wright averaged 10.2 ppg, 4.4 apg, 4.3 rpg, together with 1.6 steals a night. His versatility and length at the guard position make for an ideal backup to the smaller Young. Additionally, Dunn’s health struggles last year limited him to just 5 games, while Wright only missed 7 all year.

The next need for Atlanta was finding a bigger presence for their bench unit. Danillo Gallinari is a serviceable power forward, but he can be a defensive liability at times. To fill this rebounding, defensive big spot, Atlanta signed Gorgui Dieng. While Dieng is not someone who will play 20+ minutes often, he gives their frontcourt some experienced depth if injury or foul trouble were to occur.

What Will Set the Atlanta Hawks Apart from the Rest?

Their bench. If their young players can continue to improve and remain healthy, they could certainly develop into one of the deepest teams in basketball. The thinnest position for the Hawks is currently the forward spot. However, with Cam Reddish, De’Andre Hunter, Kevin Huerter, and rookie Jalen Johnson all on the roster, they soon could have a logjam at the position. This, of course, would be a good problem to have because they could keep whomever they desire and then trade the rest.

With regards to the four young forwards, the readiest of the bunch is Kevin Huerter. Huerter is likely the next Hawk to be receiving an extension offer because of his sharpshooting and length. He currently shoots the three-ball at a 36.3% clip, so he has room for improvement. If improvement does not occur, do not be surprised if Atlanta passes on his qualifying offer.

Although Huerter has played the best, Reddish still has the most potential. This dude is supposed to be a stud. In college, he was overshadowed by his teammates Zion Williamson and RJ Barret. On the Hawks, his role has been minimal. Even when he has played, his efficiency has been atrocious. On 11.2 ppg, Reddish shot 26.2% from beyond the arc and 36.5% from the field. I fully expect the Hawks to give him plenty of regular-season minutes to build his value, only to ship him away.

Why? Well, they have an investment in Bogdanović, thereby essentially forcing his playing time. Additionally, Huerter has proven himself to be better all-around, not to mention him being cheaper than Reddish. The player Atlanta desperately needs and can provide the most impact to the team is De’Andre Hunter. His 3/4 positioning will give the Hawks lineup flexibility to match up to bigger and smaller opponents. Just like Reddish though, he needs to increase his efficiency from deep. Hunter only shot 32.6% from three-point land, but if this can jump just 5% in the coming seasons, his value will be tremendous.

The New Kids on the Block

The Atlanta Hawks had a very successful draft. With only two picks, one at 20 and another at 48, they found two players with tons of upside. Johnson was supposed to be one of the best players in this class. However, a disappointing season for everyone at Duke diminished his draft stock. Johnson brings a big framed body with tons of athleticism and a willingness to scrap on defense and the glass. His shooting is questionable, but he is still so young.

Sharife Cooper is as unsure as they come. He is very skilled, no doubt, but his injuries led to a limited college career. In his 12 games at Auburn, Cooper averaged 20.2 ppg, 8.1 apg, and 4.3 rpg, but he was not very efficient. Nonetheless, this is a former top-20 recruit, who performed very well at a big school in a big conference. Why he fell to 48 is somewhat confusing to me, but the Hawks seem to have found a diamond in the rough. His upside is as high as they come, but he easily could never develop into anything more as well.

The Atlanta Hawks are in a great position. They have a very young roster, with enough veteran leadership around them, to make another deep playoff run. The key to them making it over the mountaintop is developing their long list of young talent. If even a few of these guys can become what they were predicted to be, this Hawks team will be scary. Many teams in the league create depth via veteran minimums, but the Atlanta Hawks are doing it through the draft. They have all the skill and potential for them to become a stacked roster, all they need now is to go out there and show it.

Even With Zero Picks, The Heat Still Had A Big Draft Night
A Quiet Offseason So Far for the Philadelphia 76ers