Will the Chargers Defense be the BEST in the NFL? 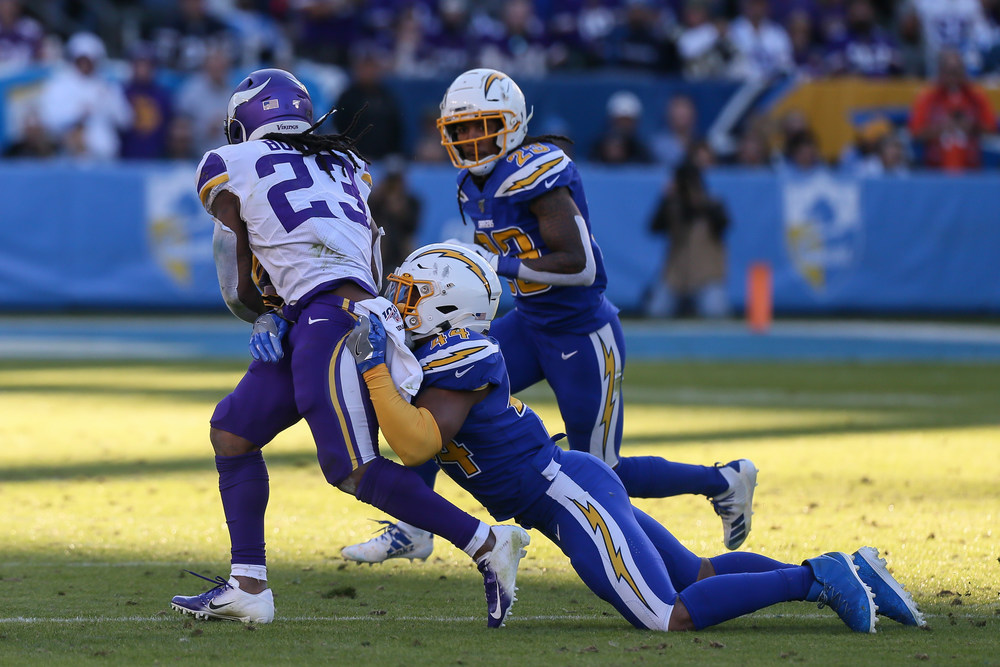 The Chargers offense is garnering a lot of attention. However, the moves made in the off-season show the Chargers organization making efforts across the board. Not enough is being said about this stacked defense. Could defensive coordinator Renaldo Hill have the Golden Ticket Defense dreams are made of? Hill’s Harbingers of Horror are coming to a stadium near you, be forewarned!

Every team in the AFC West improved their arsenal tremendously this offseason. The Broncos upgraded at quarterback signing Russell Wilson and secured future draft capital as well. They lost a key offensive weapon in Noah Fant, but sacrifice for the greater good may be the name of the game. The Las Vegas Raiders were able to reunite the Fresno State Dynamic Duo bringing Derek Carr and Davante Adams together again. Although the Chiefs lost Tyreek Hill, they gained running back Ronald Jones, wide receiver JuJu Smith-Schuster, wide receiver Corey Coleman, and other offensive weapons. This was a calculated change toward building a stronger future.

What did the Chargers do?

The Chargers re-signed key offensive weapon Mike Williams to a three year extension. Then they battened down the hatches, made their splash and generated big waves on their defense, going old school with Bear Bryant’s philosophy, “Defense Wins Championships.” Say it with me, “defense wins championships.” The additions of Khalil Mack, J.C. Jackson, Kyle Van Noy, Bryce Callahan, and Sebastian Joseph-Day revamp and reignite the Chargers’ defense. Maybe we should call them Hill’s Harbinger’s of High-Voltage Horror?

Returning to his starring role, Joey Bosa will have the opportunity to show the Chargers brass what they have been missing, putting to rest any questions about the 2016 3rd overall pick. With the support built into the new defense, the injuries Bosa suffered in two of his first five seasons should be a thing of the past. When healthy, Bosa has averaged low double digit sacks. His best season came in 2017, his second season, when he recorded 12.5 sacks and was elected to his first of four Pro Bowls. Previously, Bosa had been expected to carry the Chargers defensive pass rush since entering the league. This placed a huge target on Bosa’s back. NFL offenses focused solely on shutting him down, limiting his ability to exploit the offensive weakness and succeed in one-on-one match-ups. Were those expectations unrealistic without additional support on the defensive line to draw the attention of the opposing offense? Perhaps. Regardless, Bosa will continue starring to be a significant contributor to the success of this franchise. With multiple targets on the field, Bosa should stay healthy and do what Bosa was known for.

The addition of Khalil Mack and Sebastian Joseph-Day should ease the previous burden that rested on Joey Bosa’s shoulders. Mack, known affectionately as Bane, entered the league two years before Bosa and has definitely proven himself. Making an immediate impact everywhere he has been, he earned All-Pro Honors (2015, 2016, and 2018) along with an AP Defensive Player of the Year Award (2016). Ironically, Mack’s sack numbers do not jump off the page. Although his sacks are similar to Bosa’s double digits, Mack’s physical attributes and skill set surpass those of Bosa. On the field together, you are bound to see opportunities open up for one, the other, or both.

Then comes the big body of Sebastian Joseph-Day returning from a 2021 pectoral injury, Day will help stop the run. He can occupy two or more interior lineman. Day comes from the Rams returning to play for Chargers Head Coach Brandon Staley, his previous defensive coordinator. Under Staley in 2020, Day started 16 games and had 55 tackles in 481 snaps. In 2021, prior to his injury, Day had 3 sacks in 7 games. Let’s hope he is a man with something to prove to himself and bolts out of the gate.

‘People’ may say (yes we know who they are) just get the ball out quick to the flats. The Chargers thought about this and said a flat out NO. They signed two of the best defensive backs available in free agency, J.C. Jackson and Bryce Callahan. After the departure of Stephon Gilmore, Jackson became the number one cornerback for the New England Patriots. At the age of 26, he took up the mantle and established himself as a top corner in the league. Jackson brings lockdown defense to challenge every opponent’s number receiving threat. Callahan arrives at the Chargers after playing solid secondary for the Bears and Broncos. Over the last three seasons, Callahan has only allowed two touchdowns while lowering the completion percentage when targeted, and he hasn’t allowed more than 350 yards in a single season. These two additions will bring much needed depth and experience to the Chargers secondary. My personal answer to those ‘people’ is no, you can’t throw the ball out quickly to the flats, because it will get picked off.

The Chargers addressed and improved all three levels of their defense with these additions. Not at all a small accomplishment. There is no doubt that the Chargers defense on paper seems to be primed for a stellar defensive outing, but only time will tell if the paper can be formed into an airplane that soars or a crumpled lump tossed into the fire. Numbers don’t lie. The Chargers have historically been talented, but cannot get over the hump or put the pieces together to reach the pinnacle of NFL success. This young and talented team could solidify itself as one of the best Chargers’ teams ever. Will the tangibles and intangibles of the individuals making up this team bring about success? I believe Hill’s Harbinger’s of High-Voltage Horror will and they can.