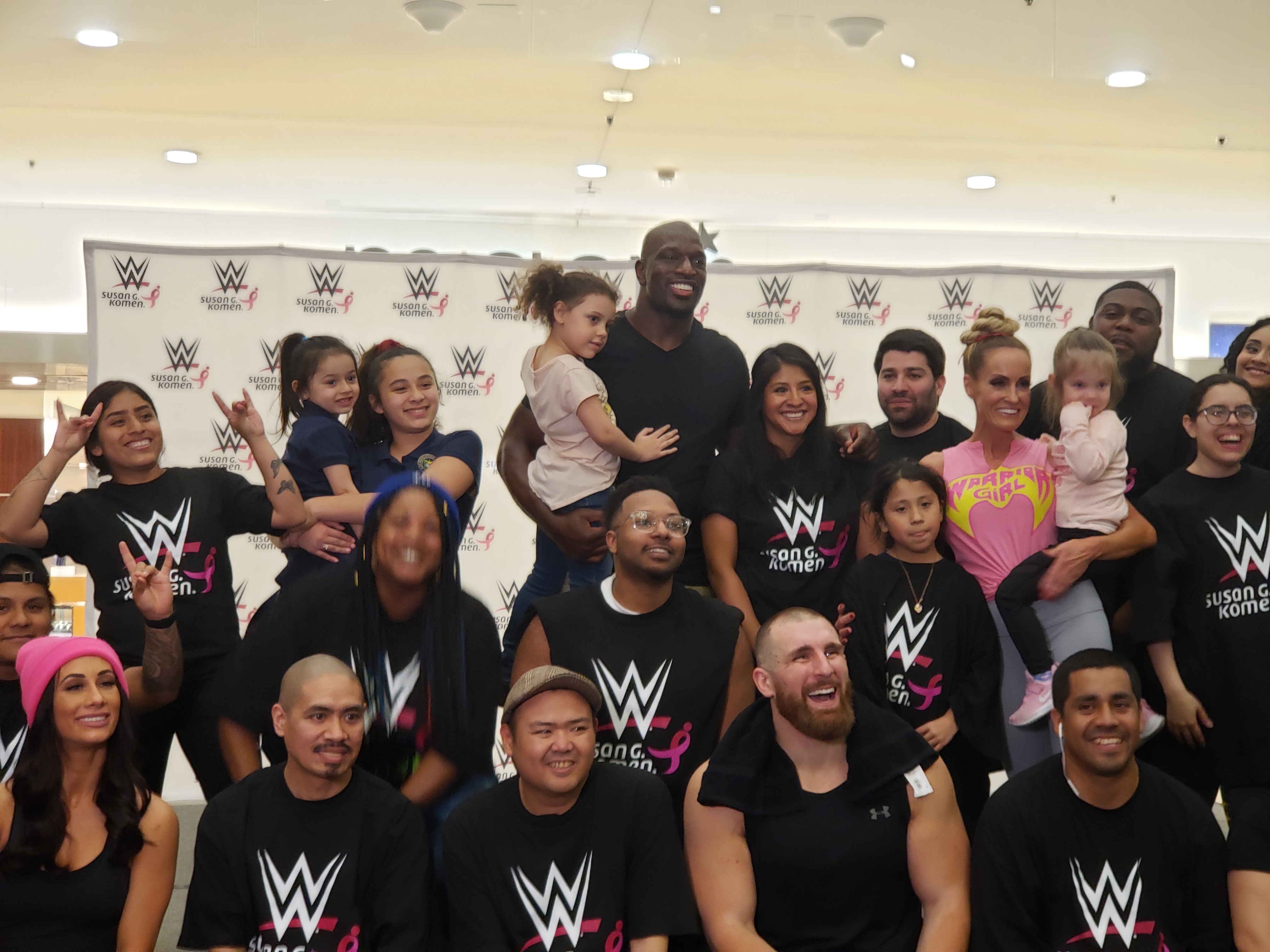 John Cena made a simple suggestion back in 2012 on how WWE could be more involved. That suggestion has formed a message and a mission to help many women fight as the WWE partnered up with the Susan G Komen foundation which is non-profit organization that helps raise awareness and money to help fight breast cancer.

This past Thursday night, the WWE partnered up with Susan G Koman Foundation once again to have a Zumba class during Wrestlemania week to help spread awareness of their mission. The class took place in Jersey City’s Newport City Mall led by WWE Superstars Titus O’Neal, Mojo Rawley, Carmella, and WWE Ambassador Dana Warrior.

The big event takes place Sunday April 7th at Metlife stadium, but the WWE schedules community outreach events as well as appearances through out the week of the big event in the surrounding areas. The class was located in front of the Macy’s wing which drew close to 50 people participating in the work out.

“WrestleMania week is more than just for the show on Sunday.” said Carmella who led the class.  “It’s also a week to be able to bring awareness to different organizations and charities like Susan G Koman foundation. To be here today and to interact with the fans while have them donating to the cause and even fans who couldn’t make it out today are still donating online. I think it is amazing to use the platform we do have and bring awareness to all of this. We got to dance and mingle with the fans and that is not something you get to do everyday so that was really fun for me.”

Mojon Rawley discussed how amazing  of an experience it is to take part in such a great event for a cause that is close to home. “WWE is really cool about doing events like this because they allow us to choose the charities and organizations we would prefer to work with and the Susan G Koman foundation is one of the top ones on our list. My aunt is a breast cancer survivor and I was there every step with her. I was able to see first hand what she was going through and what these women go through  on a daily basis and it sort of resonates a little harder for you. It really hits you close to home. Being able to do events like this and have fun while putting smiles on people’s faces, which is the WWE’s montra. It’s awesome and extra special.”

Staff members of the Susand G Koman foundation were on hand and participating in the class including Tina Miller who has been with the foundation for over six years and had the opportunity to explain how the exposure with the WWE helped the organization reach out to a whole new audience.

“We love the exposure and they help raise awareness to their entire fan base. said Miller.  “Woman we may have not been able to reach on our own will now be able get the message and help get educated about the dangers of breast cancer.”

Since the partnership has been formed, the WWE has helped the foundation raise over 2 million dollars towards breast cancer research.

For more information and to make a donation, please click on the link below:

The event was a great success as after the class were able to take pictures and sign autographs with the WWE superstars and discuss their excitement for the big event at Metlife Stadium,

Below are the interviews with Mojo Rawley, Dana Warrior and Carmella about what this event meant to them as well on how the WWE has grown in the community  over the last five years.