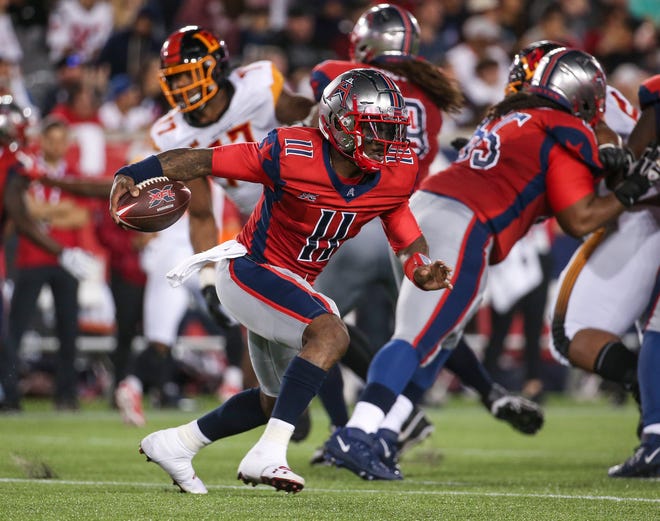 Many XFL players considered the new league as an opportunity to showcase their abilities and demonstrate that they deserve to play in the NFL. PJ Walker and Jordan Ta’amu impressed enough scouts and have signed contracts with NFL teams.

According to NFL Insider Ian Rapoport, PJ Walker signed with the Carolina Panthers. Walker would have probably won the XFL MVP Award had they completed the season.

Throughout five games for the undefeated Houston Roughnecks, Walker threw for 1338 yards and 15 touchdowns, which both led the XFL. No other QB in the XFL had more than 11 touchdowns or 1076 passing yards. Walker completed 119 passes which also led the XFL.

Walker joins the Carolina Panthers who are in the midst of a massive QB shakeup. The Panthers are looking to move on from Cam Newton and have traded last year’s starter, Kyle Allen, to the Washington Redskins (reported Ian Rapoport).

The Panthers signed Teddy Bridgewater to a 3 year/ $63 million dollar contract, so it is expected that after moving Newton that Teddy will be their starting QB next season. PJ Walker will probably be the backup QB. Yet, Walker dominated the XFL in such a way that perhaps he can win the starting QB job himself.

Jordan Ta’amu, who played QB for the St. Louis Battlehawks, signed with the defending champion Kansas City Cheifs, according to his agent Kenny Zuckerman. Ta’amu will back up superstar Patrick Maholmes.

Ta’amu is a dual-threat who was third in the XFL in passing yards (1056) and seventh in the league in rushing yards (217). No QB had more rushing yards than Ta’amu. Ta’amu averaged 5.3 yards over 41 carries.

Ta’amu and Walker both proved that the XFL can be a steppingstone into an NFL gig. The XFL will be successful long term if it can prove that the players are NFL quality and that the opportunity can be used to score an NFL job. Football players looking for a job will want to turn to the XFL if it gives them another shot at the NFL.

PJ Walker and Jordan Ta’amu are the first XFL players to land NFL jobs, but they certainly won’t be the last.