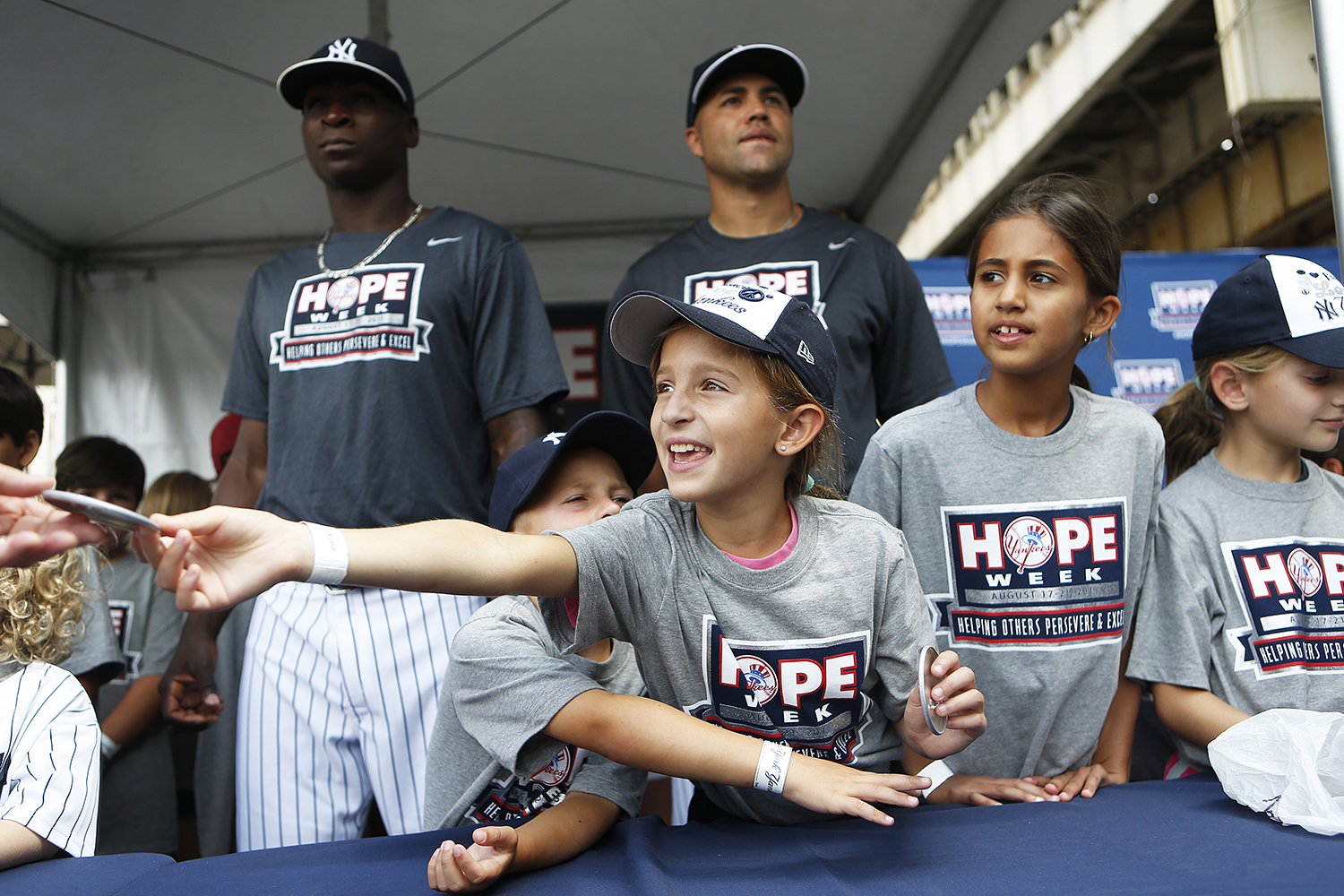 The Yankees held their annual HOPE Week this week, a week dedicated to the Yankees celebrating those who give back to their community.

The Yankees honored five different organizations in five different locations throughout New York, brightening the lives of many who have battled through much adversity.

On Monday, Dellin Betances, Starlin Castro, Aroldis Chapman, and Didi Gregorius surprised Victor and Nayyelyn Garcia at the Bronx Zoo in support of the Icla da Silva Foundation. Icla was 13 years old when she lost her battle with leukemia 26 years ago. Victor, 11, was diagnosed with leukemia in 2015, but his life was saved by his seven-year-old sister Nayyelyn due to her giving bone marrow to her older brother.

According to Airam da Silva, founder of the Icla da Silva Foundation and Icla’s brother, the success rate of a sibling-to-sibling match in bone marrow is just 30 percent.

Victor is currently in remission, and Gregorius was thrilled to hang out at the zoo.

“[My favorite part of the day is] spending the time with the kids. That’s the best thing you can do here. That’s why we’re here – it’s a good thing,” said Gregorius. “It’s something really nice to give back to the family and the kids, and everybody that’s here for HOPE Week.”

This was Gregorius’ third HOPE Week, and for him, it seems to get better every year.

“You can hear the amazing stories, what everybody else is going through, we’re here to support them,” the shortstop said.

Betances was also moved by the Garcia family’s hardships throughout the last two years.

“It’s an awesome story – Nayyelyn is the true hero here,” said Betances. “This is what it’s all about for us athletes – to come here and spend the day with these two young heroes, show them happiness and have fun with them.” 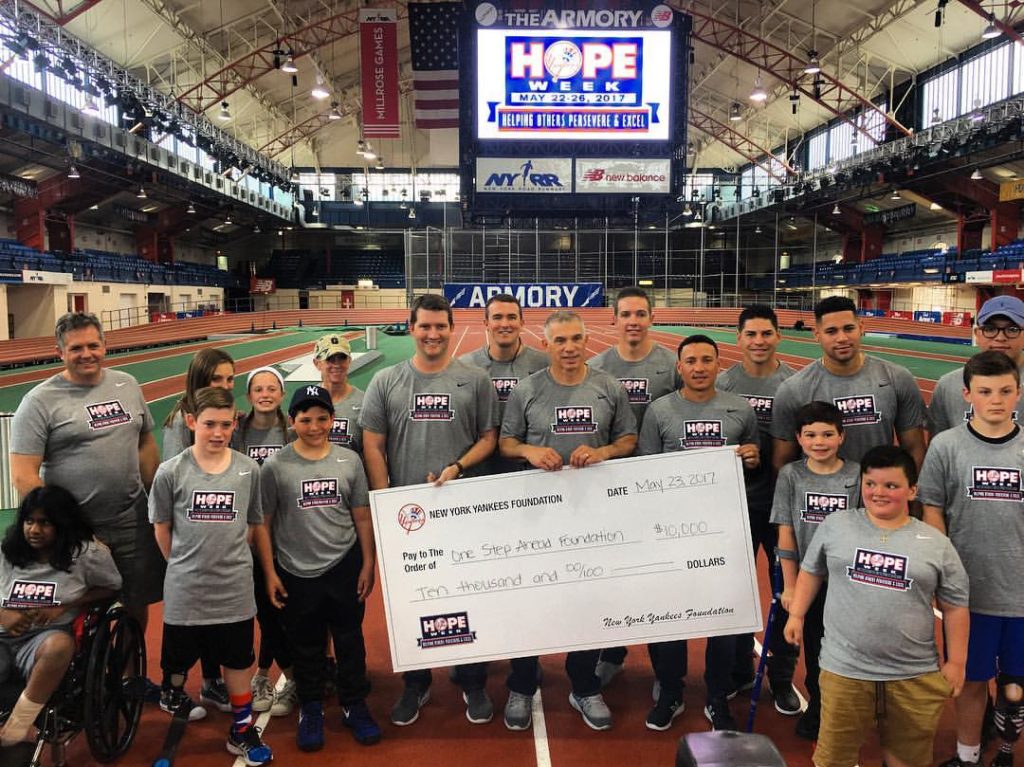 “It’s fun to be here and see a smile on those kids’ faces,” added Castro. “[HOPE Week] is one of the greatest things I’ve ever been.”

The following day saw another celebration of those who have battled through misfortune, as the Yankees honored Amy Palmiero-Winters, the founder of the One Step Ahead Foundation. She founded the organization in 2010 to provide opportunities for children with physical disabilities.

Despite lost limbs, happiness was found everywhere throughout the USA Track and Field Hall of Fame at The Armory on Tuesday by all in attendance, including Joe Girardi, Gary Sanchez, Jacoby Ellsbury, Adam Warren, Jonathan Holder, Chad Green, and Ronald Torreyes.

After being surprised at the Hall of Fame, everyone took a tour of the building, followed by a visit to the track of the Armory. Members of the One Step Ahead Foundation ate lunch on the infield of the track, but not before taking in some laps on the same ground as Justin Gatlin and Sonya Richards-Ross ran on before they were Olympians.

Ellsbury was honored to have set foot on the famous track, especially since Palmiero-Winters and the children in attendance have such a passion for track and field.

“I was happy to walk through and see the history of track and field…and then see these guys run around the track, [we] just have fun being out here.”

The Yankees also showed a video highlighting Jim Abbott’s no hitter, as well as a personalized message from Abbott to Palmiero-Winters. Abbott was born without a right hand.

“The kids are looking, and he’s missing a part of his right arm. For him to do that, I think it’s just an inspiration for the kids,” said Girardi.

“It’s obviously special,” added Ellsbury in regards to the Abbott video messager. “We’re here on behalf of the New York Yankees, he pitched for the New York Yankees, and he had an unbelievable big league career, and it just goes to show if you work hard and put your mind to it, you can accomplish anything.

Ellsbury joked about losing to some of the kids in a 200-meter race.

Girardi added, “They’re fast! It just shows you, if you have hope and you’re strong mentally, you can overcome anything.”

Kristofer Robinson, 9, was at the event with the One Step Ahead Foundation, running around the track with just one leg and crutches. The following day, he was given a new leg.

“[My favorite part of the day] was talking to all the players and running laps around the track,” Robinson said, as he boasted about his victories against the Yankees on the track.

Jimmy Fallon was a part of the action on Wednesday, as Aaron Judge, Brett Gardner and Chase Headley surprised the Comedy Kids at NBC Studios. They took a tour of the Saturday Night Live studio, followed by a tour of Fallon’s studio and a surprise appearance from the Late Night host himself.

On Thursday, the Yankees honored A Moment of Magic, a program that visits children with pediatric cancer while dressed in some of the most recognizable princesses by children.

The charitable celebrations ended on Friday, as Tyler Cashman and the Points for Pain Foundation was honored at the Loeb Boathouse in Central Park. Matt Holliday, Chris Carter, Austin Romine, Chasen Shreve, Aaron Hicks, and Bryan Mitchell were on hand to take on rowboats and remote-controlled sailboats in the park, along with some football and a picnic lunch.

“It was a blast,” said Romine. “It was fun to get out there and be able to get one-on-one time with [Tyler] and talk to him.”

Holliday had some trouble manning the rowboats, as he and Carter’s boat fell behind the others.

Brian Cashman, along with the Yankees’ starting rotation, surprised members of the foundation and several children dressed up as superheroes.

“It’s a little tricky for big guys – our knees get in the way,” said Holliday. “Our best and efficient, we had one of the kids on there rowing for us. Somehow, they put Carter and I on the same boat that tested the weight.”

“Watching these boats, playing with the kids, getting to know them and hearing their stories has been a lot of fun,” Holliday added.

“This kid has such a big imagination,” said Hicks. “He was able to…come out with this program, and he’s doing a great thing with it.

Hicks said HOPE Week is one of the best weeks of the year.

“You’re bringing two types of people together and enjoy each other,” said Hicks. “For us, it’s really cool to go out and meet different people and hear their story, and get to see them and talk to them.”

The Yankees gave all five organizations a check for $10,000, and Girardi seemed honored to have participated in his ninth HOPE Week.

“Life is about giving people hope,” said Girardi. “Without hope, we have nothing, and that’s what HOPE Week is about.”