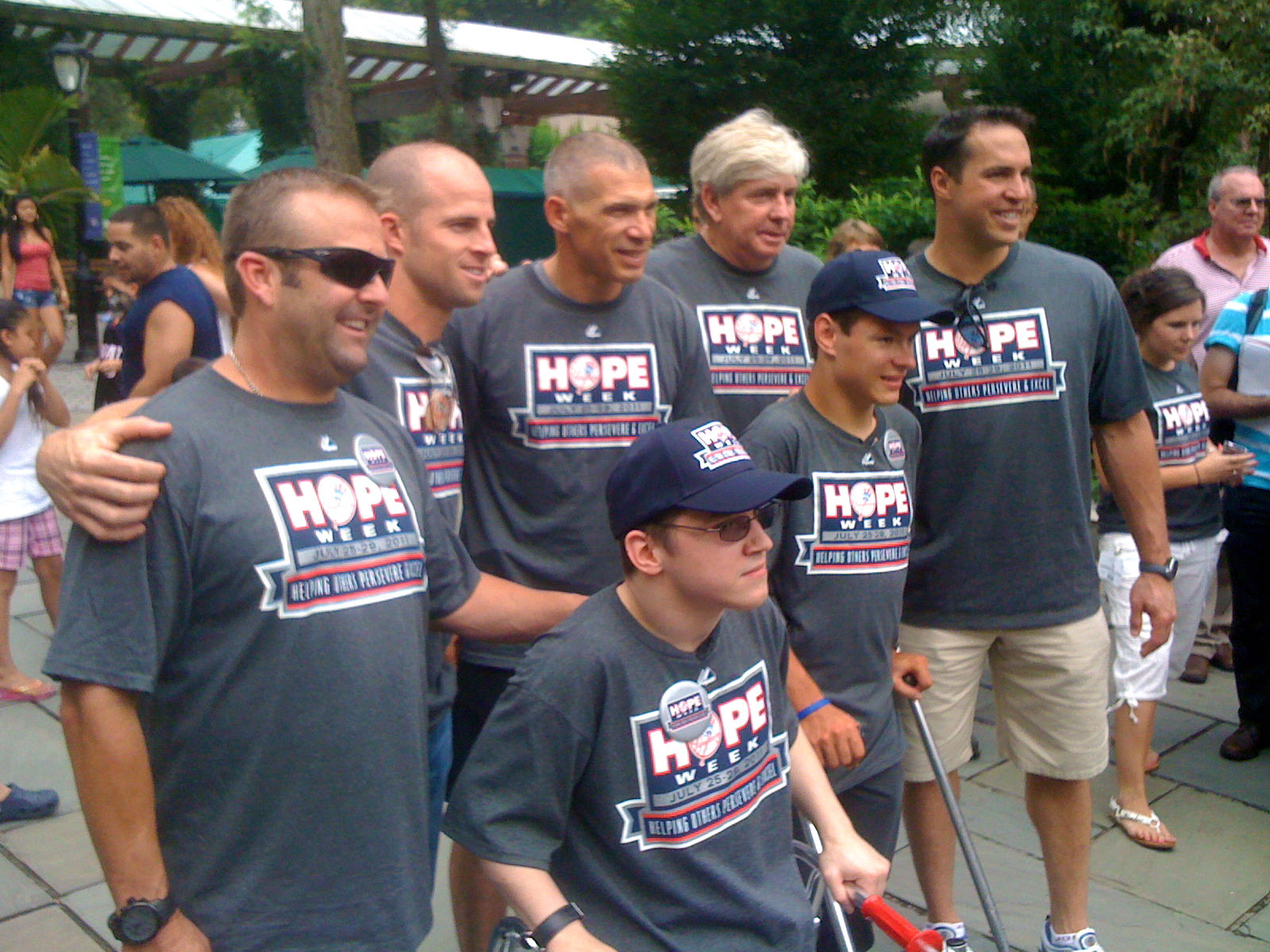 Back Sports Page recently followed the New York Yankees during their third annual HOPE Week. The Yankees started HOPE Week (Helping Others Persevere and Excel) in 2009 with the belief that “acts of goodwill provide hope and encouragement to more than just the recipient of the gesture.” Since its inception, the Yankees have dedicated one week each year to honoring an individual, family or organization deserving of their support. Each day of the week, a different cause is celebrated not only at Yankee Stadium, but also with a day filled with activities throughout the city. Every player on the active roster and the coaching staff takes part in a day of activities the honorees will never forget.

Monday, July 25th – Sometimes even Nick Swisher, the most irreverent and dynamic of Yankees in this era, can be overshadowed. This was one of those times. Despite the multitude of Yankees and other assorted Broadway celebrities in attendance, this day was all about the kids of Daniel’s Music Foundation and, more specifically, the inspiration for the organization, Daniel Trush.

Daniel was a typical 12-year-old in March 1997 when one of five arterial undiagnosed brain aneurysms burst in his head while playing basketball. After he awoke from a 30-day coma, he could not speak or move for most of his 341-day hospital stay. From the outset of his stay, his father Ken sang to him and music was played at his bedside. Upon his return home, Daniel started music therapy classes, which had an enormous impact on both his mental acuity and emotional well-being.

The music therapy had such an enormous impact on his transformation that the Trushes established Daniel’s Music Foundation (DMF) in 2006. DMF is a non-profit organization providing free music instruction to individuals with disabilities throughout New York City. In a six-year span, DMF, which is funded entirely by donations, has expanded from a single five-person class to 150 people in 26 onsite and three offsite classes with a waiting list.

Programs are open without limitations based upon age, race, disability or talent. While the entire Trush family is heavily involved in DMF in a variety of capacities, Daniel is both a member and assistant instructor. Ken Trush stated, “Daniel could have been a victim. Instead, he works with our students every day. He gives those with disabilities a forum where they can prosper and be the people they were meant to be.”

As the participants began rehearsing at the Brooks Atkinson Theater on that rainy Monday morning, there was a true feeling of anticipation. While the foundation members were preparing for DMF’s semi-annual music recital, there was a murmur of confusion followed by shock as Nick Swisher, Russell Martin, Francisco Cervelli and Chris Dickinson walked up to the stage. Once the members realized that there were actual New York Yankees not only attending the celebration but participating, the excitement was overwhelming and evident to everyone in attendance. For an hour, the members and their new friends practiced such hits as “We Are Family,” “You’re The One That I Want” and of course, the old stand-by, “New York, New York.” There was a short break where the participants got to meet their heroes and then the concert started.

Hosted by New York Yankee radio broadcaster Suzyn Waldman, each member of the Yankees was introduced to a rousing ovation. However, the loudest applause was saved for Daniel, who, though a bit overwhelmed by the Yankees’ appearance, offered a funny and moving speech to the crowd stating, “When I came back from the hospital, I weighed 65 pounds and couldn’t speak or move. I communicated by blinking my eyes.” Following the speech, Daniel performed “Daniel’s Thank You Song,” a song he co-wrote with DMF instructor Jerry Powers, with former Yankee great Bernie Williams playing guitar in the background. The concert would consist of eight songs, including Broadway classic “All That Jazz” and an impromptu “Take Me Out to the Ball Game” from Williams. Another highlight was watching Nick Swisher and Francisco Cervelli singing and dancing with the members to Back Street Boys’ hit “Larger than Life.”

The players also seemed thrilled by their impact on the members of the foundation. Nick Swisher couldn’t help but show his excitement when he “saw the smiles on their faces. That’s what its all about.” Russell Martin also accentuated the importance of music in both his life and in general. He stated that his father was a saxophone player, his mom was a singer and that “music is as close to magic as you are going to get. It is therapeutic and these are the reasons that I chose to be at this event.”

Following the concert, the Yankees donated $10,000 to Daniel’s Music Foundation and then offered one last surprise. Not only were the DMF members invited to the Yankee-Mariner game for that night, but they would perform the national anthem. Furthermore, Daniel and his family were on-field for batting practice and he threw out the ceremonial first pitch.

When asked about the Yankees appearance, Daniel simply said “I am in shock and awe. It is like a dream. It’s a great day.” What more could anyone ask for?

If you would like more information or to donate to Daniel’s Music Foundation, please visit http://www.danielsmusic.org.

On Tuesday, July 26, day two of HOPE Week 2011 started at the Beekman Beach Club at the South Street Seaport. On this day, the Yankees honored an organization uniquely connected to New York but that every American could stand behind: Tuesday’s Children. Tuesday’s Children was born out of the tragedy of September 11, 2001. The organization is “committed to making a difference in the lives of the families of 9/11 victims [by developing] many support services and programs to help heal family members. Our vision is to fulfill ‘The Promise’ of being here to support the 9/11 children into adulthood while continuing to address the evolving needs of this population.” One of the programs developed by Tuesday’s Children is its mentoring program, which pairs children who lost a parent on September 11th with an adult who also lost a loved one in a tragic situation.

The mentors and mentees involved in this program arrived at the South Street Seaport ready for a beach party. Little did they know who would be joining them. As the ‘opening ceremonies’ began, Joe Torre, Curtis Granderson, Mariano Rivera, Phil Hughes, Cory Wade, Steve Garrison and Luis Ayala walked down the steps and towards the beach. The kids could hardly control themselves as the Yankees honored mentor of the year, Keith Pryde, and his mentee, Robert, who lost his father in the World Trade Center attack. Keith and Robert were matched in 2008, when Keith joined Tuesday’s Children after his sister died in the Virginia Tech campus shootings. Keith felt “that [Tuesday’s Children] would be one of the perfect ways to grieve for my loss and it’s been a blessing ever since…At times [Robert and I] are friends, brothers and a father and son all mixed into one…you can’t beat it.” The two have become so close that 10-year-old Robert will be the ring bearer at Keith’s wedding next fall.

Once the formalities were over, it was just another day at the beach: over to the left, Ayala and Wade played cards with a few young girls and over to the right, Granderson talked with a young boy as they looked out over the water. Phil Hughes was involved in a rambunctious game of ping pong while Rivera joked over lunch. And that was the beauty of the day–just a bunch of kids hanging out with the Yankees. There were no forced handshakes or furious scribbles of an autograph before rushing out the door…the Yankees had the full attention of the kids and the kids had the full attention of the Yankees. When the water balloon fight broke out, it was hard to tell who was having more fun, the players or the kids. The laughter was infectious as the players scorched each other with the balloons and the kids wisely reached for buckets of water when the water balloons were used up. As Granderson ran from the next onslaught and Hughes called a huddle to strategize the next attack, their ear-to-ear smiles made you forget they were the adults in attendance. The kids had successfully transformed the players into 11-year-old versions of themselves.

With the laughter and light-hearted tone of the day, it was easy to forget, if just for a few minutes, what brought everyone together in the first place. The events of 9/11 are tough for any American to swallow but when you look at these kids who, because of those events, grew up without a mom or dad, it’s even harder. Both Joe Torre and Mariano Rivera talked about a sense of pride in representing the city both in the immediate aftermath of that day and as we approach the 10th anniversary. After a visit to the armory just four days after the attack, Torre realized that “[the Yankees] had a responsibility [to the city]. The message I delivered to the players was that we represent the city more than we represent the Yankees and I think everyone realized with pride what we meant to the people here.” As the 10th anniversary comes around, Rivera said that he feels “no pressure [representing New York]. You feel proud because you’re representing New York, you’re representing a big group of people who love the game, love to work and love to give.” He also stressed the importance of moving forward from that day. “I cannot believe it’s been 10 years, it seems like it happened yesterday, but thank God we are moving forward and not sitting and remembering. When the time comes…we’re going to remember…but at the same time, we are always moving forward.”

The mentoring program aims to help these kids do just that, move forward. As Torre said, “This world is very tough to survive in and any time someone thinks they can do it alone I think they’re mistaken. You need someone to help you along the way…and that’s what this mentoring program is all about because the world is not going to stop.” By providing these kids with someone to not only help them along the way but who also understands the pain of loss, Tuesday’s Children is putting them on the path to success.

After lunch, the group boarded a water taxi en route to Yankee Stadium. The kids clung to the players as the boat made its way past the Statue of Liberty and up towards the Bronx. Even the players recognized this day was something special, as they pulled out their camera phones to snap a few photos. After a tour of the Stadium, the kids joined the players on the field for batting practice and stretches. The evening was capped by Keith and Robert throwing out the first pitch before the Yankees beat the Mariners, 4-1. Pitch by pitch, step by step, the city continues to move forward.

The Beaten Path That Led To Salvation
CJ Wilson Gives Back