Zibanejad Checks Off All Boxes As Rangers Next Captain 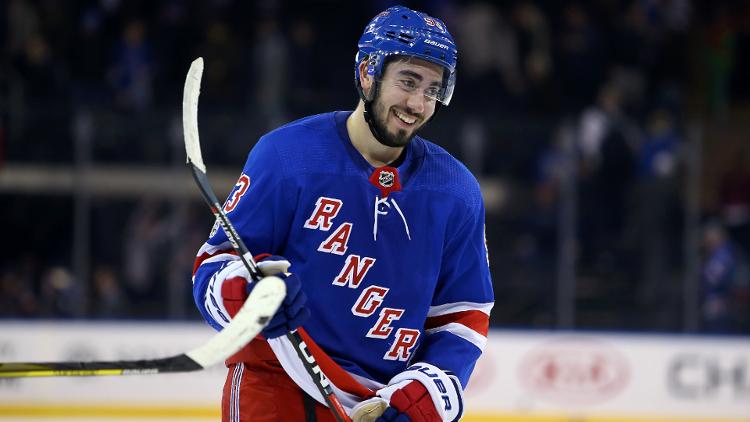 Last season, Mika Zibanejad had a breakout year for the New York Rangers with 30 goals, 44 assists and an overall 74 points. It marked the first time Zibanejad had ever scored 30 goals in a single season, and he also led the team in games played, appearing in all 82. He was rated one of the top twenty players in the NHL for ice time, which he averaged 20:34 minutes a night. This season he is predicted to play on the top line in the middle for the Rangers beside newcomer and superstar, Artemi Panarin and Pavel Buchnevich. Zibanejad’s resume is very decorated thus far in his Ranger career. All he is missing is the infamous Rangers “C.” Many fans believe Zibanejad checks off all the boxes when it comes to a potential captain. He is a leader on and off the ice with all the rookies, an awesome centermen and forward and overall a great guy.

When asked about his fellow Swede teammate, Henrik Lundquvist was quick to compliment his play.

“You could see the skill when he came here,” Lundquvist said. “Obviously, I’d played against him, too, but when he came here his first year, you could see he was very skilled with the puck. But the last year and a half, he’s really looked so strong on the puck. It’s really hard to get the puck from him. His skill, now he uses it at the right time. He’s aware of puck management. He’s a very smart player on both sides of the rink.”

Zibanejad night in and night out proves why he should be the next captain of this team. His skills speak for themselves and his teammates can always count on him for showing up each night. During pregame warm ups, he is always joking around with his teammates and fellow friend Chris Krieder. He is always the last one off the ice even after the horn blows numerous times telling them they need to get off. Come game time, he is all business.

Much chattering has been going on about the potential of Mika being the next captain in the media and all over Twitter. When asked his thoughts on it, Mika humbly responded:

“It’s nothing that I really focus on,” he said. “We have great leaders in here, so for me to be part of that leadership group last year was obviously a huge honor for a team like this. I didn’t think last year changed me in any way of how I am as a person, or what you would call a leader or whatever. I don’t think anything has changed — and nothing is going to change.”

Mika Zibanejad should and deserves to be the next captain of the Rangers. Beside him should be Chris Kreider and veteran defender Marc Staal. Together these three would be dominant leaders for the younger generation coming up.

The Blueshirts kick off the season October 3rd at the Garden against the Winnipeg Jets, where all will be revealed about the next leading core for the Rangers. All signs point to Mika being the next generation leader of this potential playoff team.