Angels Going All In 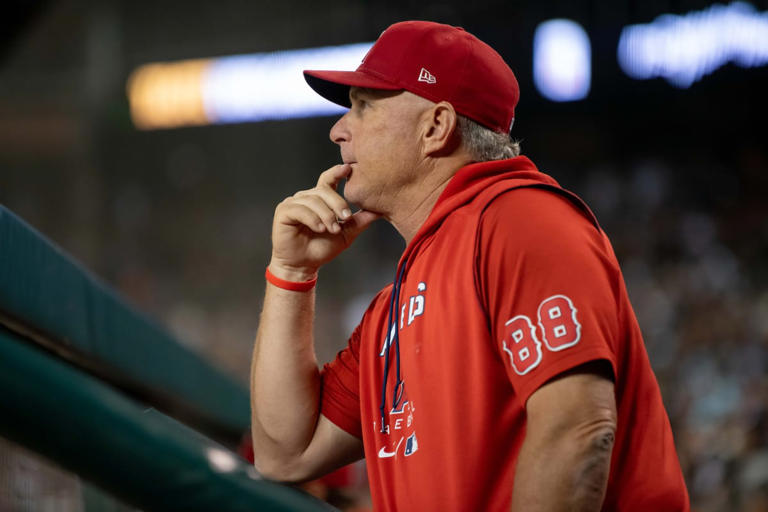 Above: The Angels going all in this offseason. Above, manager Phil Nevin looks on during a game in 2022. Nevin will be returning to the Halos as manager in 2023. And the Angels are already making some major noise with acquisitions such as Hunter Renfroe and Tyler Anderson. Photo Credit – HalosToday, Fannation Website.

The Los Angeles Angels are making a push for the 2023 playoffs, but their are still lingering questions on the roster.

The Los Angeles Angels are going all in at the start of the 2022-2023 offseason. Just last week, the Halos made a move to add slugging outfielder Hunter Renfroe from the Milwaukee Brewers. Earlier in November, they got Tyler Anderson during free agency from their cross-town rival Los Angeles Dodgers.  They also traded for Gio Urshela from the Minnesota Twins.

I mention here how a player issue from 2022 could be taken care of with these moves. However, it doesn’t seem like those acquisition may be enough to put them over the metaphorical hump.  The Angels still have some clear holes on their roster, most notably at shortstop.  Manager Phil Nevin is familiar with Urshela from their time with the New York Yankees, but most evaluators think Urshela should stick at third base.

As Mike Axisa of CBSSports.com denotes here, there’s still work to be done. One of the question marks will be the rotation and how to build around two-way star Shohei Ohtani. While Anderson will be a nice complement to Ohtani and Patrick Sandoval, there are still some issues at starters four and five. However, the Angels are on a bit of a budget crunch, so they might not be able to afford some big-money names.  They are already in the realm of their team-record payroll.

David Fletcher is a solid second baseman, but maybe the Halos could look at a guy like an Elvis Andrus or a Nick Ahmed to solidify the middle infield.

There are other questions to have a look at, such as the bullpen situation and what to do with outfielder Jo Adell. Having high-value contracts in Trout and Anthony Rendon also puts a bit of a burden on the situation.

So, overall, despite the early intrigue, the Angels aren’t exactly title contenders at this point. While their all-in early approach is admirable, there lies more work to do ahead. Who knows what 2023 will bring to the Halos?