Baseball in July: A Family Affair

The fifth game of the first ever Wichita Wind Surge series against the Northwest Arkansas Naturals featured faith and family night at Riverfront Stadium. 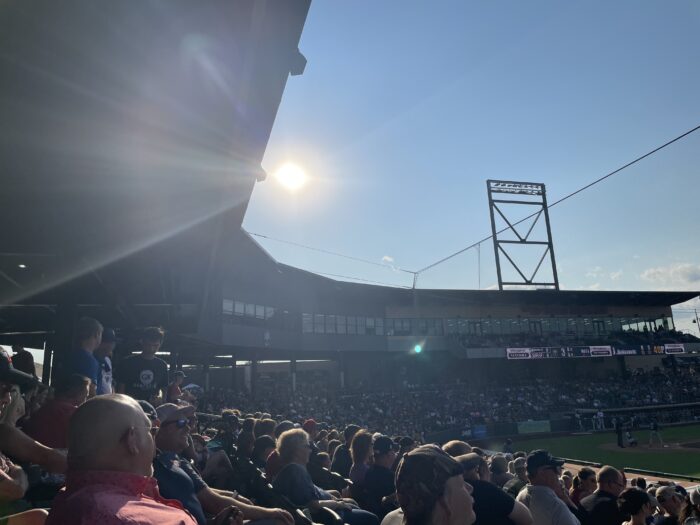 Baseball, after all, requires both family and faith—even if it doesn’t demand either in the traditional fashion.

The Wind Surge, the AA affiliate of the Minnesota Twins, struggled on Friday, June 9, against Kansas City’s AA team, the Naturals. They lost 10-2. In fact, Wichita lost four straight to Northwest Arkansas, and in so doing, they also lost their tie for first place in the AA Central North.

But on June 10, Wichita battled back. Because baseball is a faith game.

Seven and a half innings in, excellent pitching and defense from both sides locked the teams in a 0-0 stalemate. Even without their top prospect, Bobby Witt Jr., the Naturals proved tough to beat. They’d threatened to score on several occasions, advancing runners as far as third base, but starting pitcher Jordan Balazovic and reliever Zach Neff held them short of home plate.

Then at the bottom of the eighth inning, Wichita’s patience paid off.

With the bases loaded, left fielder BJ Boyd crushed the ball out of center-right and with one swing gave the Wind Surge a four run lead.

Of course, Wichita fans’ patience has been tested by more than a few innings or even a few games. In 2007, the city’s beloved Wichita Wranglers moved to Arkansas and became, serendipitously for July 10th’s game, the Northwest Arkansas Naturals. 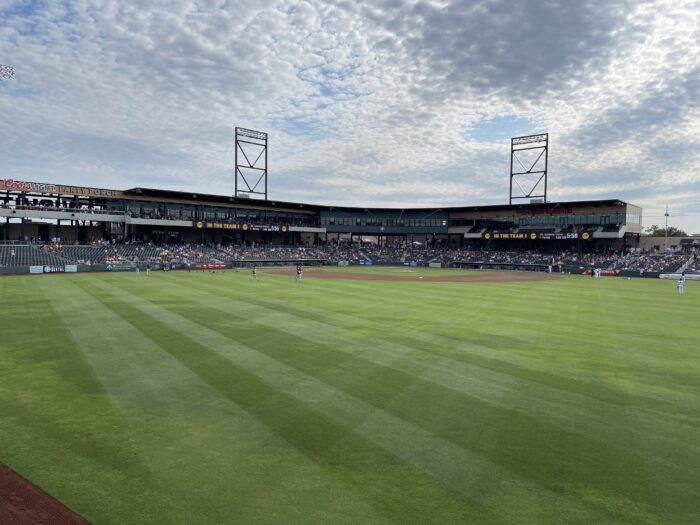 For over a decade, no Major League affiliated minor league team played in Kansas. In 2020, the Wind Surge swept into town, only for the season to be cancelled. Finally, in 2021, the freshly formed Wichita team took the field at their new stadium.

The stadium is so new, in fact, that Boyd’s grand slam was the first for the Wind Surge at Riverfront, and the crowd celebrated along with the players. It helped that the next batter, Andrew Bechtold, only added to the festivities. With the count at 1-1, he hit his own home run, seemingly sealing the victory for Wichita. The fans roared.

Still, after an 0-4 start to the series, the crowd size might be expected to dwindle. The opposite happened.

On July 10, 5,360 people showed up to the ballpark. Because baseball is a family game.

The crowd donned Wichita Wind Surge hats and Twins jerseys. They bridged generational divides and socioeconomic borders. I couldn’t help but wonder, as I watched a young girl reach up to grab a woman’s hand while they waited in line for hot dogs, how many of those 5,360 people were family.

I looked out at the field, watching Alex Phillips take the mound to start the ninth inning, and I thought about my dad.

Thirty-one years ago, my father, Todd Hansen, stepped up on a mound, not far from the one Phillips occupied, and played baseball.

In 1990, the word Wranglers splashed across the front of my dad’s jersey, and he pitched from the now demolished Lawrence-Dumont Stadium. But both his ballpark and Phillips’ stood along the wide and winding Arkansas River, and both men represented the city of Wichita. Even during the tough times.

In the top of ninth inning, the Wind Surge gave up three singles and a double, which bumped the score from 5-0 to 5-4 over the course of three batters. The home team, however, averted heartache. Third baseman Dennicher Carrasco grounded out, and Wichita’s long wait for a win paid off.

From my vantage point for most of the game, I wasn’t close enough to see the genetic resemblances or hear the familiar sibling banter among the 5,360 people below. But I knew the men and women scattered across the stadium were, in large part, parents and children, brothers and sisters, grandparents and cousins.

In the press box, at least two, probably three generations talked and laughed as they reported on the details of the game together. In the crowd, a father hoisted his toddler over his arm like a gym bag and navigated his way back to their seats where he deposited his daughter next to an older man that could only be his father. Between the birthdate of the oldest person in the stadium and the eventual last day of the youngest, 200 years of baseball could be watched and played.

The memory, the activity, and the future of the game all came together during nine innings in Wichita.

Usually during those innings, I’m happy to take a seat in the gallery, a spectator among the crowd. Usually I am a teacher, and my father is a pharmacist. But not in Wichita.

In Wichita, it was faith and family night. And we had work to do, my father and I.

J.P. Crawford: Snubbed All-Star?
Baseball in July: If You Build It