Ageless in the Valley of the Sun

There’s a reason that people relocate to the Valley of the Sun as they grow older.

Arizona is a gorgeous, exciting place to live. And with it’s sunny days and warm, dry climate, it can also enhance physical health, improve psychological well-being, and lend to a happier, healthier lifestyle.

State Farm commercial superstar Chris Paul recently relocated there in the last year, and the benefits of living in the Valley seem to have rejuvenated him, and limited a COVID exposure stint to 11 days. 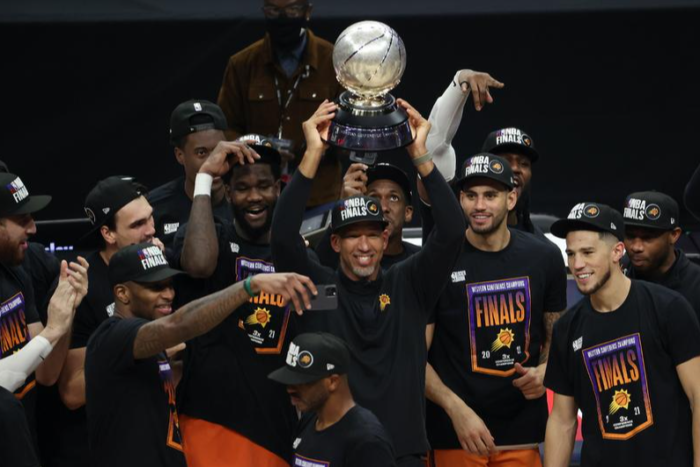 It also helped him last night to a 41-point performance last night against his former team – the Los Angeles Clippers – eliminating them and advancing the Phoenix Suns to their third Conference title and a very valid shot at winning their first-ever NBA Championship.

And let’s not forget the abuse he took from Patrick Beverley and DeMarcus Cousins, spending time both on his back and taking shots to his back, all the while putting the Phoenix Suns on his back in the third and fourth quarters, including a personal 8-0 run late in the third, and three three-pointers in the fourth.

Ageless … and with plenty of time to rest, since the Atlanta Hawks – Milwaukee Bucks series is 2-2 and tighter than Giannis Antetokuonmpo’s knee right now.

Suns faithful, even longer. 28 years since they’ve had their last shot at the Larry O’Brien Trophy.

To get there, Paul reached down deep and pulled out his inner Dara Torres, George Foreman, Gordie Howe, Nolan Ryan, Satchel Paige, and even he found a little Tom Brady in his repertoire last night.

Chris Paul has seen his share of injury-induced disappointment as he’s struggled and bounced back so many times in his career:

Y’know, I’m almost certain the underwriters at State Farm have been busier than the people shooting commercials with Paul – no wonder they have had to sub in people like James Harden, Aaron Rodgers, Sabrina Ionescu, and Paul’s brother “Cliff.”

But a shot at a championship can cure a lifetime of ills – and apparently the Arizona desert and sunshine can cure COVID in eight days.

Regardless, as you can see, Paul has been a warrior, persevering through it all to get the chance of a lifetime with at least 4-5 days of rest in the desert sun.

Rejuvenation at its best – so soak it in, Chris … or Cliff … or whoever the hell you are.

You deserve every minute of this wonderful, warm feeling of winning.

And I have a feeling the best may be yet to come.