Baseball in July: A Brief Stint in the Majors

Most summers, a night at Sahlen Field would feature the Buffalo Bisons, the Toronto Blue Jays’ AAA affiliate, competing against any one of the other teams in the AAA East. 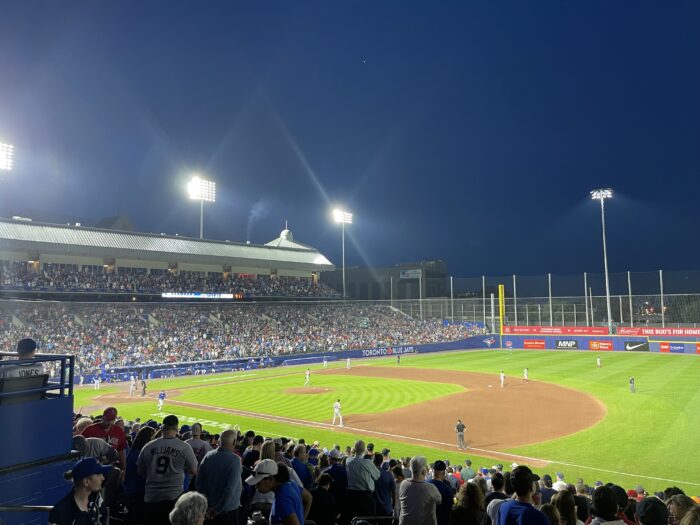 For the majority of 2021, however, the pandemic forced the Blue Jays to fly south and stay in the United States, taking up residency in Buffalo. That arrangement meant that the Bisons moved their home camp to Trenton, New Jersey.

As vaccines do their work throughout the both Canada and the US, and life slowly goes back to some semblance of normal, though, baseball does too. On July 16, the league announced that the Blue Jays will return to Canada and finish out the season in their usual Rogers Centre. The Bisons, likewise, will come home to New York.

But first, Toronto took the field one last time in Buffalo.

While conducting research for my cross country minor league trip across the United States, I somehow missed the geographic jigsaw puzzle that COVID-19 created. And so I, for the first time this summer, found myself with a stint in the Majors.

The Big Show—and the last show for the Blue Jays in Buffalo—lived up to the hype.

True to their sports city reputation, Buffalo came out in masse on July 21 to bid their Blue Jays goodbye as Toronto faced off against the Boston Red Sox. The stadium was full in downtown Buffalo. Still, the Canadian based Rogers Centre, with a capacity of 49,282, dwarfs Sahlen Field’s 16,600.

But baseball is about more than just the numbers.

Before, during, and after the game, the scoreboard at the back of the outfield flashed “Thank You Buffalo.” The announcer repeatedly expressed the Blue Jays’ gratitude for the hospitality and support New York offered them during their home-away-from-home experience. The fans, decked out in everything from Guerrero Jr. jerseys to Buffalo Blue Jays t-shirts to Bisons gear, serenaded the team with the traditional “OK Blue Jays” during the seventh inning stretch.

Unfortunately for their finale, although the Blue Jays racked up four runs, they could not keep up with the homer hitting extravaganza put on by Red Sox. The home team lost 7 to 4.

Behind me, a mother explained to her daughter that after the game, Toronto needed to return to Canada. But they wouldn’t be going far, she reassured her. America’s northern neighbor is visible, after all, all along I-190. The Peace Bridge that extends across the Niagara River and connects the two giant countries will be busy again soon, with traffic flowing between borders.

“I wish they would have stayed longer,” the girl said.

“I know,” the mother answered. “But remember, the Bisons will be coming back.”

Indeed, the Bisons are coming, and soon. They’re scheduled to return to Sahlen Field on August 10. The crowds will surely be waiting for them.

I couldn’t help but think, though, as the applause grew thunderous when the Blue Jays players tipped their hats to the crowd one last time, that Toronto’s stint in Buffalo—like mine covering the Majors—helped snap everything back into perspective.

The intimacy of a minor league ball park, the familiarity and the atmosphere, no doubt impacted the athletes. If baseball is America’s favorite pastime, then the minor league reminds everyone just who that America is. Similarly, the stalwart fans showing up for future stars season after season saw exactly who those AAA players have the potential to become.

The children, though, more than anyone, convinced me that three months in Buffalo made a difference. Watching the faces of kids sporting Toronto caps and Blue Jays stickers, it was clear that a whole new generation of diehard fans sprang to life this season. Kids who one day could look back and tell their own children about the summer the Blue Jays flew in Buffalo. 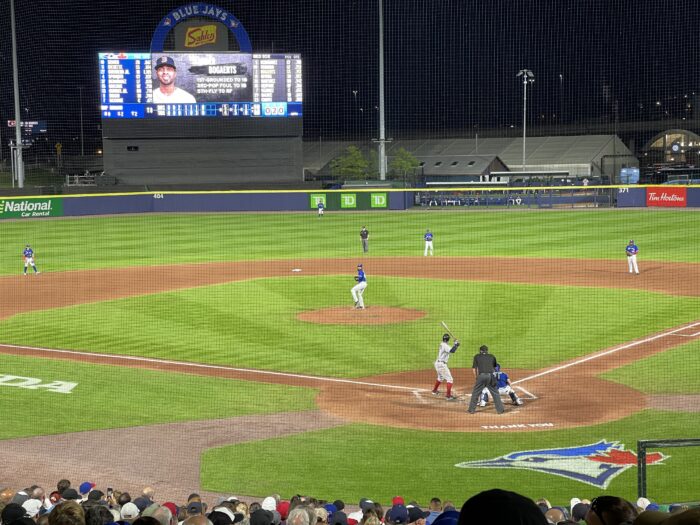 This article is part on the ongoing series Baseball in July. Click here to read the previous article.