One of my favorite movie scenes comes towards the conclusion of Martin Scorsese’s GoodFellas. Ray Liotta’s Henry Hill is at the end of his rope, his life unraveling in a slow crawl towards death or jail time. On the day of his arrest, Henry’s schedule is an endless stream of tasks going off the rails. When he delivers contraband weapons to Robert De Niro’s Jimmy Conway, Jimmy sticks him up, refusing to pay for a gun he can’t use. When he attempts to make Ziti, his business forces him to put his brother in charge of the sauce. Even his mule refuses to board an airplane without her lucky hat. All the while, he’s tracked by a helicopter following his every move. It’s death by a thousand pittances. At the end of the day, he succumbs to the cops tracking his every move, and is arrested outside his home.

I have a feeling Bradley Beal could sympathize with Hill’s plight, only because his years with the Washington Wizards have transpired in similar fashion. While D.C. hasn’t pushed him out the door with a sweeping gesture, they’ve certainly piled straw upon straw on Beal’s back. They traded Kelly Oubre Jr. for the equivalent of a copy machine. The front office chose to tank their chemistry, signing infamously poor locker room guys such as Dwight Howard, while letting useful players like Tomas Satoransky, Markieff Morris, and Bojan Bogdanovic fall to the wayside. And of course, they seem to have found themselves on the losing end of the recent John Wall/Russell Westbrook swap. I mean, just look at these shooting numbers, via statmuse.com:

Yikes. Just like the annoyances of Hill’s life led to his arrest, I imagine Washington’s plethora of mistakes will lead Beal to want out in the near future. Sooner or later, the Wizards will be forced to make him available via trade, and as the lone superstar on the market, Washington will be able to demand an impressive return for the league’s leading scorer. Here are five teams they might want to give a call once they commit to a rebuild, and the packages it’ll take them to put Beal in a new set of jersey colors.

As for Washington, nabbing Simmons would act as a soft reset of sorts. As Liam Neeson once put it, the Wizards would need to surround the Aussie with players that have a particular set of skills–namely the ability to stretch the floor and defend. The Wizards don’t have that right now. In fact, of the active roster, only Davis Bertans, Thomas Bryant, and Deni Avdija (at least after some development) fit the criteria outlined above. That being said, with a few years of roster reshuffling in a league where shooters are growing more common, the Wizards could tailor a team around Simmons–a luxury he’s never experienced in his professional career. There are certainly worse gambles than restructuring a team around a 24 year-old top draft pick, and the Wizards might just be bold enough to roll the dice.

Ask any Grizzlies fan, and they’d help all three players move to DC in order to pair Ja Morant with Beal in their backcourt for the foreseeable future. In a way, pairing the two of them is a throwback to Beal’s time in Washington–his experience playing with John Wall should allow him to pair nicely with Morant’s uber-athletic playstyle. Given that Beal would have to assimilate to Memphis’ roster on the fly, having some familiarity with a teammate’s playstyle certainly goes a long way.

However, Memphis presents a few wrinkles that Beal wasn’t able to enjoy in the nation’s capital. First, Taylor Jenkins is experienced building an elite defense around subpar individual defenders like Brooks, who Beal would be replacing in the starting lineup. The Grizzlies’ stout defense would ideally reduce the pressure on Beal to put the ball in the basket, allowing him to grow more into a more efficient and defensively-oriented player. Additionally, the Wizards weren’t able to put an adequate third option around their star backcourt, whereas the Grizzlies can immediately roll out Morant and Beal alongside Jaren Jackson Jr, who’ll provide them with space galore (Jackson shot 39.4% from deep last season) and an elite defensive presence on the interior.

The HEAT were at their best last season when Herro played like a legitimate third option. With the exception of a couple of bubble scrimmages, Miami was undefeated when the internet sensation scored over 25 points. On the occasional outburst from the Kentucky product, the HEAT were able to draw attention away from Jimmy Butler and Bam Adebayo, adding a much-needed complexity to a squad that was offensively limited. By bringing in Beal, the HEAT would effectively ensure that their third option would score over 25 in each of their games (lest you forget, Beal is averaging a league-high 34.5 points per game). Miami was able to lock up the Lakers for the majority of last year’s finals–with Beal in tow, who’s to say Erik Spoelstra and company can’t take home their first title of the decade? 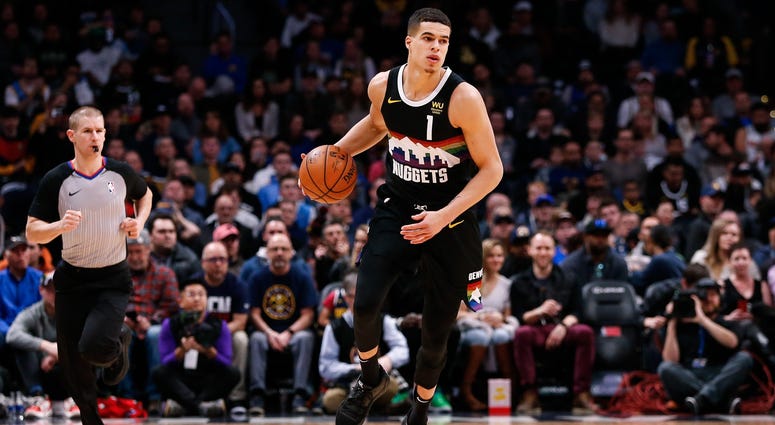 Ah, the Denver Nuggets. Always the bridesmaid, never the bride. Though their showing in Orlando was irrefutably impressive, I can’t help but feel like they reached their ceiling on the Disney Campus. Nikola Jokic may very well have a better postseason in him, but forgive me for doubting that the Ghost of Pete Maravich will possess Jamal Murray in future playoff series. Denver needs to consolidate their assets while they can, and with a lack of superstars available, Beal may be their best chance to cash in for a near-superstar. While his fit alongside Murray may be questionable, it could be Denver’s best chance to catapult themselves into their first NBA Finals, advancing past their competition through sheer offensive firepower.

A team’s rebuild occurs in three phases: asset accumulation, player consolidation, and championship configuration. The Spurs have managed to get their hands on their fair share of promising young guards–Dejounte Murray, Derrick White, Lonnie Walker IV, Keldon Johnson, and Devin Vassell all seem to project as above average NBA players. But, like a group of cowboys in an old Western, the town just ain’t big enough for all of them. Swinging Beal in a trade allows them to eliminate the positional overlap of their young core and extract some value from DeRozan, whose contract expires at the end of the season. After several years of mediocrity, the Spurs need a big name to ensure a jam-packed AT&T Center, and to entice Greg Poppovich into sticking around for a few more years. Though Beal may not be the league’s brightest star, he’ll certainly go a long way in keeping ticket sales afloat, and give Pop some room to craft San Antonio into a title contender once more.

The Man to Man Podcast Episode II: The Super Bowl is Set
Trust The Rebuild