It’s been a series of incredible games from Jonas Valanciunas. Faced with a series of formidable opponents in Domantas Sabonis and Nikola Vucevic, nobody would’ve blamed the Lithuanian for floundering either legs of a demanding back-to-back. Instead, Valanciunas took advantage of the opportunity to make history:

I’ve written before that I don’t think JV’s counting stats translate to winning, but I’d be downright asinine if I didn’t acknowledge that his play has been crucially impactful as of late. For the record, I’m defining impact as a contribution towards winning— that distinction should help frame the ways I assess Valanciunas both in this article and going forward. His counting stats often make you gawk, but I’ll focus much more often on things like his +/- as I think that’s a better gage of impact. As an example, check out how unrelated his counting stats are to how well the team performs with him on the court: 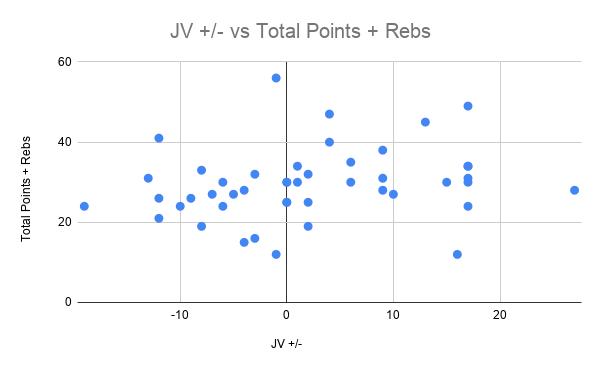 Yes, that’s a graph. You come to an article written by a math major, that’s what you get.

Looking at the chart above, it’s pretty clear that there’s almost no relationship between Valanciunas’ counting stats and his plus/minus. His recent game against Indiana is a great example of this–34 points, 22 rebounds, -12. However, despite that outlier, I’ve been noticing that JV’s points and rebounds have begun to correlate with his impact after Taylor Jenkins’ recent offensive changes. He’s +33 over his last five games, and has been incredibly efficient, shooting a mind-boggling 71.2% from the field. That’s what we like to see!

Given his recent history of posting monster numbers, there’s been a lot of advocacy for basketball minds to put Valanciunas in the top ten, if not top five centers in the league. While I (along with the rest of Grizz nation) am obviously thrilled with the big man’s performance as of late…I can’t help to think that’s jumping the gun a little bit. As such, I’m taking it upon myself to evaluate all aspects of Valanciunas’ case for a spot in the pantheon of elite centers–the good, bad, and even the memable:

(I mean seriously, how awesome is this screenshot??)

Before I dive deep into the numbers, I want to praise Valanciunas on the impactful elements of his game that don’t often show up in the box score. First off, he’s nailed down the subtle tricks of his bruising playstyle to a tee. You could make an entire spectacle based on watching him jostle around smaller, unsuspecting bigs in the post.

Additionally, Valanciunas is the key behind the team’s ability to adjust in third quarters. His third quarter mark of +1.8 is by far his highest, but don’t take that for a matter of luck. Against the Pacers, Jonas was a key cog in Memphis’ adjustments to take away Indiana’s looks at the rim. After surrendering layup after layup in the first quarter, the Grizzlies only allowed the Pacers three makes in the paint over the entire fourth period, largely due to Valanciunas adjusting to prevent Indy’s cutters from doing damage.

You can see that unfold in the following set–Valanciunas immediately shifts over to cover the Malcolm Brogdon cut, wisely abandoning Goga Bitadze, a career 22.5% shooter, out on the perimeter, leading to a miss.

Subtle strengths aside, the obvious elite element of Valanciunas’ game is his rebounding–he ranks third in the league in both total and offensive rebounds per game. Unsurprisingly, the largest way this translates into impact is his second chance points. Valanciunas leads the league in second chance points (thanks to Shawn Coleman for pointing this out), cleaning up his team’s mess in order to boost efficiency and turn otherwise fruitless possessions into scores.

However (and this is where this article may get controversial), I do think Grizzlies fans tend to overestimate the impact of Valanciunas’ rebounding efforts. First off, I’m not sure Valanciunas’s rebounds are a great indicator of winning basketball. There are several ways to interpret the following graph–one could say that JV’s boards have no effect on a game’s outcome, or one could say that the worse the team shoots (and thus they play), more opportunities open up for JV. Either way, you can’t argue with the fact that there doesn’t seem to be a by-the-numbers relationship between his rebounds and the team’s performance.

Admittedly, there’s also a lot of mess to clean up. In the same way one can’t pick up an assist without your teammate making a shot, you can’t pick up an offensive rebound without a teammate missing a shot. It’s clear that Valanciunas is a skilled rebounder on both ends, but I think playing on a team that ranks 22nd in effective field goal percentage might explain why he’s taken the jump from a good rebounder (maxing out at 9.5 rebounds per game in Toronto), to elite (averaging 12.7 per game this season).

While those rebounds are at the core of his ‘eliteness’, it’s worth at least acknowledging the nuance of JV’s effectiveness as a scorer. Grizzlies fans may be tempted to lump his post scoring efficacy into his case for a spot in the top tier, but at the very least, his numbers tend to say otherwise. Valanciunas ranks in the 64th percentile on postup possessions–that’s good, but not elite. Otherwise, despite the vast majority of his pick and roll buckets coming off assists from one of the league’s best playmakers, the Lithuanian only ranks in the 46th percentile among roll men, per NBA.com. While Valanciunas is an adequate scorer, his surprising weakness as a roller might not bode well for his long term future with the franchise.

All this brings me to what’s truly keeping Jonas from being truly elite, starting with his turnovers. Ball handling mishaps are the key issue for Valanciunas–of all players with a postup frequency of greater than 10%, his score frequency is 23rd, but his turnover percentage of 17.6% puts him in the top ten. To be clear, there are some brilliant players like Karl-Anthony Towns and Giannis Antetokoumnpo who rank above JV in turnover percentage. Problem is, they actually dish the rock. The Greak Freak is currently averaging 6.2 assists per game, and Towns is racking up 4.6 on a nightly basis. Meanwhile, Valanciunas 1.01 assist:turnover ratio ranks a pitiful 54th among centers alone.

Valanciunas also comes with some smaller defensive flaws. While I’ve praised JV’s work as an adjuster on the defensive end, he isn’t pretty defending bigs out on the perimeter. He allows his opponents to shoot 49.9% from 8-16 feet (seventh worst among centers), and doesn’t do much better up close, allowing opponents to shoot 59.5% from the paint. If you look at centers playing similar minutes, only three (Steven Adams, Nikola Jokic, and Nikola Vucevic) have allowed a worse percentage. Frighteningly, JV’s opponent field goal percentage also takes a significant jump in the fourth quarter, rising all the way up to 63.7% in the painted area.

In fact, clutch time itself is a fascinating element of Valanciunas’ case. It’s clear that he can dominate down the stretch when needed, as evidenced by his assault on the Bulls’ defense last night, but he’s yet to gain consistency in crunch time. He’s concerningly shooting only 65% from the charity stripe in the fourth, and still ranks 67th among centers in effective field goal percentage over the fourth quarter. While his overall field goal percentage does rank somewhat higher, a decent part of that jump is explained by the fact that JV stops shooting threes completely in the fourth–not an ideal solution in the modern NBA. Fortunately, his defense on the perimeter helps make up for this lack of shooting, only allowing opponents to shoot 33.6% from downtown over the fourth.

All things considered, I’m not sure the Lithuanian’s strength on the boards offsets his downsides enough to place him in the top five center conversation That’s not an indictment of Valanciunas, who is deserving of all my praise and then some–if anything, it’s more of a statement how many talented bigs the NBA boasts. Hell, I somehow went this entire article without mentioning guys like Joel Embiid, Rudy Gobert and Anthony Davis, all of which are elite players in their own right.

Ultimately, what matters is that Valanciunas is giving Memphis awesome minutes at the center position. Having just set the Grizzlies record for double-doubles in a season, it’s clear that JV’s veteran status isn’t a roadblock to improvement. In the words of Taylor Jenkins, “the fact that he’s grown from year one that we’ve been together to year two, and he embraces that growth opportunity speaks volumes to who he is”. At only 28, there’s somehow still a great possibility for the Lithuanian to grow even further. If that turns out to be the case, I can’t wait until basketball heads world wide join Pete Pranica and myself in our daily exclamation: “Jėga”!!