Anticipation and anxiety, those were the two emotions most hockey fans felt leading up to the June 20th reveal of the new Adidas line of uniforms. Adidas won the bid to produce the NHL’s jersey supplanting Reebok, who has been the leagues provider since 2005.

The uncertainty of how Adidas would handle the task left many fans un-easy. None more so than the New Jersey Devils fans.

With Lou Lamoriello now in Toronto and a new ownership group in firmly in place, the Devils have been slowly transitioning away from the old regime and have been trying to put a new stamp on the franchise. From changing of the much beloved goal song (Gary Glitters, “Rock and roll part 2”) to the in game experience. This Devils front office has changed the face of Devils Hockey.

Traditional Devils fans have not taken well to some of these changes. As evidence of their defiance can be found whenever the home team scores. The crowd bellows an acapella version of the now banned goal song, and accompany the tune with the infamous “You Suck” chant.

So when whispers began to surface that the Devils were updating their uniforms, Devils nation began to feel uneasy. Would they change the logo? Would they revert to their classic green and red color scheme ? What would the jersey template look like ?

With so many unknowns and remarkably no leaks to satisfy everyone’s curiosity, fans grew more and more restless.

The Devils may not be an original 6 franchise, they may not have the largest fan base, but they are loyal, and they believe in tradition. The Devils logo is by far and away one of the best in all of sports. Their jerseys is a classic template that is both clean, and timeless. And while other teams have changed their jerseys many times over the years. The Devils have remained true to their design.

To say Devils fans were unhappy with the new uniforms would be an understatement, as contempt poured in over social media, prompting the team to change their twitter profile to read:  “The Official twitter feed of the #NJDevils. Not a fashion company ¯\_(ツ)_/¯.” A quirky rebuttal to the wave of hate tweets they received in the wake of the unveiling. The organization made it abundantly clear. They were not going to engage the disgruntled masses. 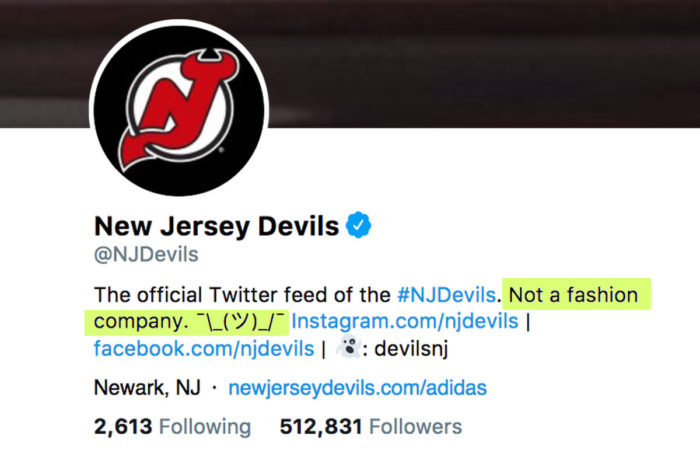 Petitions were created on change.org, and boycotts were called for.

It is difficult to judge whether this is an irrational over reaction, or the Devils really missed the mark on their new jerseys.

The new designs stay true to the red and black color scheme, but the template has been altered to pay homage to the history of the franchise.

Acknowledging where a team came from is a great way to keep the historical aspect of the game alive. However many Devils fans indicated that this isn’t their history, and that they don’t care about the Colorado Rockies, the Kansas City Scouts, or some obscure Newark hockey team. 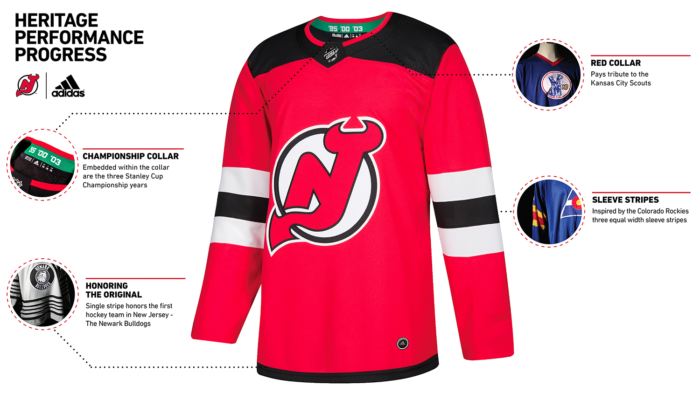 To the faithful, their history began in 1982. Their traditions were established in the early 90’s. This was the jersey that Brodeur, Stevens, Neidermayer, and Daneyko wore, this was the jersey worn when they hoisted 3 Stanley Cups…THIS is their team.

Fans have been quick to point out that teams such as the Carolina Hurricanes, Arizona Coyotes, Colorado Avalanche, Winnipeg Jets, and Dallas Stars, do not feature brand markings from their former city and team.

So Why should the Devils ?

The outrage has emphasized what many Devils fans believe to be a huge disconnect between them, and the team. The belief amongst some is that the ownership, and front office truly do not understand the fan base, and what Devils hockey is all about.

Is this a fair assessment? Or a bi-product of the built up frustration of losing, and an inability to turn the page?

It is a tough position for the Devils front office to be in, and by all accounts they have handled it well.

Whether the collective tantrum has an impact or not is unclear. The Devils seem content to let time pass, and hope that people just need time to adjust to the change. The best way to gauge how fans truly feel is to see how the jerseys sell. Many fans will but they jersey simply to have the latest sweater, but how will the nay-sayers react? Will they dig their heels in? Will they get used to the change and come to realize they like the new look?

One thing is certain, whether you are for or against the new designs they are here to stay, at least for the next season.

And winning cures everything.

Joe Ruback returns to Off Topic
Hope for Hischier