This past week saw a few international teams play some scrimmages in preparation for the Olympic Games in Tokyo. Nigeria, Australia, the United States and Argentina met in Las Vegas, Nevada to engage in a few round robin games, and one of those teams featured a Philadelphia 76er.

Unfortunately, none of the U.S.A players on the squad were chosen to represent America for the Olympics. USA Basketball inquired about Tobias Harris’ availability, but ultimately went with Keldon  Johnson and Javale McGee to replace Bradley Beal, so no 76ers will be representing the United States.

Luckily, the 76ers featured quite the international lineup, with at least four others players able to play for nations around the world. Two notable ones are Joel Embiid for Cameroon and Furkan Korkmaz for Turkey. Unfortunately neither of their teams made the Olympic Games. Cameroon didn’t qualify for the Africa’s World Cup and therefore the Olympics, while Turkey fell in the first semi-finals of the last chance Olympic Qualifying tournament. Finally, Ben Simmons was eligible to play for team Australia, but chose to withdraw, stating he wanted to use the offseason to develop individual skills. That leaves the 76ers with just one (so far, pending Harris) representative for the Olympics, Matisse Thybulle, for Team Australia.

Matisse Thybulle is coming off a great sophomore year. While the offense is still a work in progress, his already prodigious defense took another step, and he was rewarded for it, getting voted to the All-Defensive second team. For a player of his minutes to make the team is a historical achievement, and it was well-deserved. Thybulle has carried that momentum into his games with Team Australia, and he’s been a key piece to their undefeated record in the four-team scrimmages.

Thybulle was huge in this one. Despite not starting, he played the fourth most minutes on the team, very clearly the sixth man for the Boomers. His defense was great as always, picking up an absurd three blocks and four steals and his length is a problem for any team in any format. His ability to affect shots on the perimeter is unmatched in the NBA, and it was on display against Argentina. Adding to that, his athleticism was noticeable on the court, as he looked faster than pretty much everyone else and threw down the most emphatic dunks of the game.

Most importantly, Thybulle went 3-3 from deep. While his above-average hops and speed give him the ability to develop as a cutter (and we saw him continually try to sneak into the paint in long possessions with the 76ers, although it often went unrewarded) his main offensive output needs to be from threes. If he can develop a reliable triple, that increases his threat exponentially. Not only does he make them for himself, he crucially helps space the floor, and he opens up bigger lanes for him to cut through, or the ability to attack hard closeouts. Increased offensive output makes it easier to give him more minutes, and then he can wreak havoc on defense even more.

All told, Thybulle dropped in 15 points (third on the team) on 6/9 shooting, a very efficient and encouraging performance. The one tiny miscue was his 0/1 from the free throw line. In a vacuum, missing one free throw is no big deal, but Thybulle really struggled from the line last year, and it will be nice to see him hit a few in the Olympics. 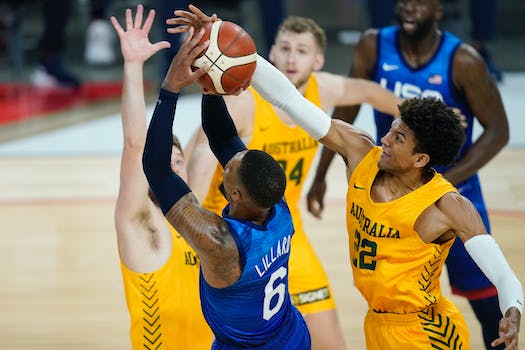 Argentina is not the power they once were, with Luis Scola aging and no Manu Ginobli, perhaps it should be expected for Thybulle to do well. Whatever you want to say to discredit Argentina, you can’t say for the best team in the world, USA men’s basketball, and Thybulle excelled again. He put up very similar numbers to his Argentina performance, going 5/7 from the field and 2/3 from three for 12 total points. Again, transition buckets and cuts to the hoop were his bread and butter along with the corner three. He also added in three assists, and Thybulle showed some passing chops throughout the season for the 76ers.

As per usual from Thybulle, the true highlight was the defense, where he contributed two blocks and three steals. One of his blocks was against a Kevin Durant fadeaway jumper, which should qualify as one of the new Wonders of the World with how rare and amazing that is.

While Thybulle got the start in the third game, Australia and Nigeria didn’t play at full strength. Australia played none of their normal starters, and their normal bench players that got the start only played about 15 minutes each. Nigeria did much the same, with only two starters that played against the US starting in this game. In his 14 minutes of action, Thybulle still managed two steals, and while he didn’t score he got another three assists.

Unfortunately, the fourth game which would have been a rematch versus the United States was cancelled due to the health and safety issues that is also taking Bradley Beal off the Olympic team. The next time anyone will be able to see any 76ers in action will be at the Tokyo Olympics.

Thybulle cemented himself as a critical part of the Australia Men’s National Team. He’s contributed his normal stellar defense, amasssing stocks at an unbelievable rate, but that’s just the usual for Matisse. The real surprise has been his effectiveness on offense. It’s a tiny sample size, but he’s hit 5/6 threes so far, mostly on spot up corner attempts. Luckily, that’s all he needs to do for the 76ers. He did have one dribble pull up make, but that’s not something that the 76ers, or Australia, should rely on. Thybulle also continued his growth as an off-ball cutter, and Australia seems well-equipped to exploit that, with numerous backdoor cuts and slip screens that Thybulle got easy buckets on. The 76ers need to watch closely, and hopefully steal some of those plays for themselves.

All in all, it was a fantastic scrimmage session for Australia and Thybulle, and it gives them real hope to medal in Tokyo. Medal aspirations seemed unlikely after Simmons dropped out last minute, but beating USA should give them the confidence to go out and hang with anyone, and Argentina aren’t slouches either. In fact, Argentina came in second at the most recent Basketball World Cup to Spain, so it’s not a stretch to say that Australia beat two of the top three teams this week. Hopes are high, and if Thybulle can keep excelling for Australia, another leap for him could be coming in 2022. If nothing else, at least we’ll get some sweet vlogs from the man himself.

Here Are Two Teams Lillard Deserves and Deserve Him
USA Basketball Won Their Last Exhibition, But Is There Reason to Worry?