With the season on the way, hopes are high for many teams. For the Philadelphia 76ers though, despite having the best record in the East last season, there is only uncertainty. A key part of the team, Ben Simmons is all but guaranteed to never wear the Sixers colors ever again, and the potential return for him shrinks by the minute. A team that got bounced in the 2nd round is going to be undoubtedly worse this year, unless the front office can pull a rabbit out of the hat. That, or some of the young players make a massive step up. Here are three candidates to breakout and take the league by storm.

Before getting to the guys who have a good chance to break out and make a mark this year, let’s talk about the latest draft class. It’s not particularly surprising for a team picking 28th, but it’s doubtful anyone from this year’s draft class makes much of an impact this year. The 76ers have gotten solid year one contributions from their last two first round picks in Tyrese Maxey and Matisse Thybulle, but not only was Springer drafted later and younger than both, he’s also much more raw in his game. Thybulle especially was already THE best defender in college (he won the 2019 Naismith Defensive Player of the Year) and 22 years old when he was drafted, while Maxey was also raw and young, but had an elite floater game at least which translated pretty much flawlessly into the NBA.

Springer on the other hand, is all potential. He was a good defender in college, but besides that there wasn’t much he could hang his hat on. He showed hints of an excellent all-around game though. Springer’s feel and instinct for passing was a widely reported skill (although he averaged just 2.9 assists to 2.4 turnovers) and he shot 43.5% from three (although on 1.8 attempts per game) and more importantly shot 81% from the line. He also just turned 19 around two weeks ago. The kid is crazy young and has a ton of room to grow, so it wasn’t a bad pick in a vacuum, he’s just not likely to help this year much. Ben Simmons leaving opens up room for another wing/guard defender which Springer can slip into, but unless he grows incredibly quickly he’s not going to be in games come playoff time. It’s not impossible, and Doc Rivers’ player development track record last year was solid, but it’s extremely unlikely. Which, to be clear, isn’t a bad thing given Springer’s age and rawness.

As for the other two, second rounders rarely, if ever, really make an impact on teams, especially if they are late picks, so the deck is already stacked against them. Filip Petrusev is a Euro-stash for now, and he’s already signed a contract to play in Turkey. Charles Bassey has had visa issues keeping him out of preseason games, and he’s another raw potential guy. He’s got size and athleticism and is a dominant inside force, with a little bit of an outside game. Unless that latter part really takes a jump forward though, Andre Drummond can do the inside scoring and rebounding thing when Joel Embiid is resting, as can Paul Reed who was drafted the year before. Again, the pick wasn’t a problem, as Bassey has as much potential as you can get in the second round (some draft outlets had Bassey as a late first rounder) but he doesn’t have much of a spot on the Sixers this year. 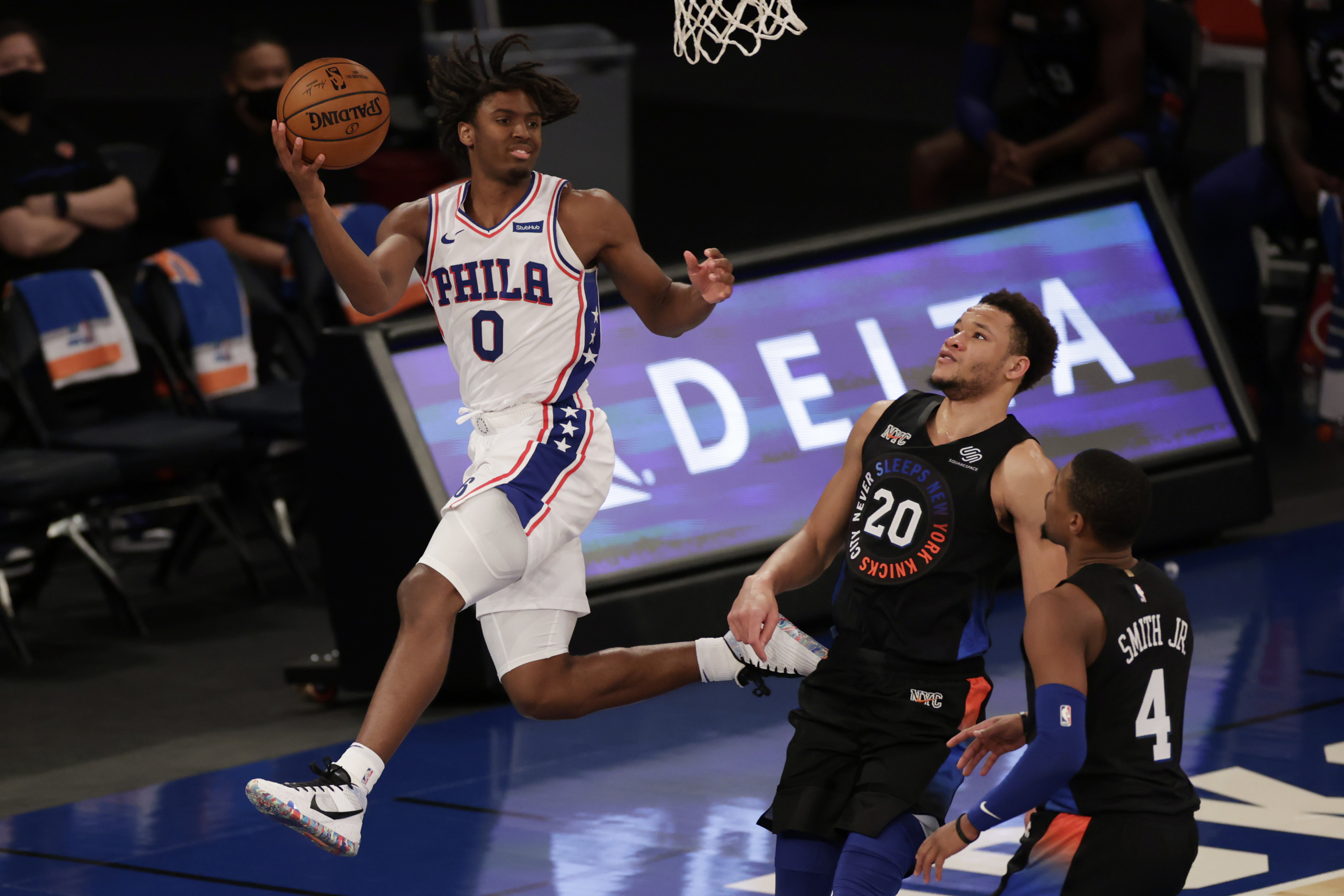 The obvious one is Maxey, who is being thrust into a starting role with Ben Simmons gone. In many ways, Maxey is an anti-Simmons. He’s on the small side, and is much more adept at scoring than setting teammates up, and while the defensive potential is there, he’s no Simmons on that end. Compare that to Simmons’ elite size, playmaking (in transition at least) and defense, but with an allergy to scoring. Unless major reinforcements come before the trade deadline, it wouldn’t really be an exaggeration to say the 76ers will go as far as Maxey can take them. At this point, Joel Embiid, Tobias Harris, Seth Curry and Danny Green (the other four starters) are basically who they are. Embiid doesn’t have much room to go up as a near-MVP, and Harris probably just had the best season he’s going to have, scoring 20 a game on nearly 50-40-90 shooting in the regular season. Curry and Green are over 30 and have had basically the same game their whole careers. The only difference from last year then, is Maxey instead of Simmons.

Overall, that will be a downgrade, but fit-wise Maxey could make it an upgrade. Getting a playmaker and shot creator at the point guard instead of Ben Simmons sitting at the dunkers’ spot in the half court should open things up for everyone else. Even better if Maxey can start hitting threes at even an average clip. Simmons’ defense and transition dominance won’t be missed if Maxey can learn that Trae Young hybrid floater/lob technique, and Maxey already has one part of that down. Maxey could be the key to unlocking the 76er offense, which often stagnates and goes cold. Too many possessions end up with an Embiid or Harris iso. Right now, Maxey’s only contribution to the half-court offensive is his driving ability, but if he can add passing and shooting to the mix (not easy, but it’s not like Maxey was horrible at those things either) then he’ll more than replace Simmons. Call it addition by subtraction. 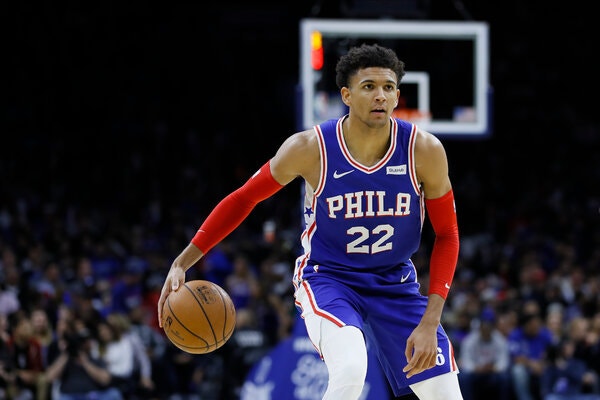 Thybulle’s breakout candidacy isn’t based on growth so much as increased opportunity. Thybulle’s game has some significant overlaps with Simmons. Both are athletic (although Simmons was much more gifted in that regard, which is true of Simmons vs. 99% of the NBA’s history) but offensively limited, with incredible perimeter defense. That means they were pretty much redundant and couldn’t share the floor together, ESPECIALLY when Dwight Howard was brought into the mix. With Simmons gone, the need for a wing stopper is more apparent, and there’s less people that Thybulle absolutely cannot play alongside. Thybulle already made a Second Team All-Defense, which with his minutes (20 per game) was something only two other people have done. With more minutes, First Team All-Defense is easily within reach, and with the reputation and notoriety he is getting, if Thybulle can break the 30 MPG mark Defensive Player of the Year isn’t impossible. Incredibly unlikely yes, considering non-bigs almost never win the award, but what Thybulle did on a per-36 basis last year was legitimately historic.

More minutes with hopefully some better spacing should also help Thybulle offensively. Thybulle struggled for most of 2020, but it is encouraging that his scoring was quite decent in the Olympics, which is the latest real game action he’s seen. His 7.8 points per game weren’t anything to write home about (although it was better than he’s ever done in the NBA) but he shot 62.1% from the field (mostly dunks in transition) and 41.7% from three on two attempts per game. Those aren’t bad numbers at all, far from the negative he was last year on offense. There’s always hope his shooting can stabilize, and he’s got a budding semblance of an off-ball slashing game. He was a key part of the Australia team that took bronze, and can hopefully keep that same energy when he suits up for the Sixers again.

Thybulle with scoring punch makes the bench way more deadly, and if he can run with the starters for long stretches when he has a good matchup on defense or is feeling particularly thief-y, even better. 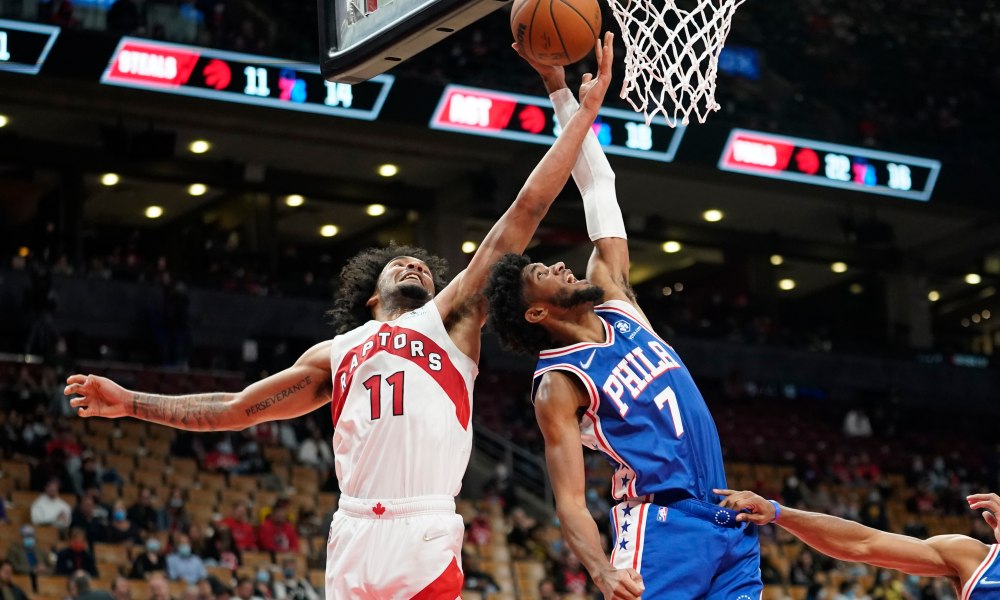 The first two guys were pretty obvious candidates. Picking the two young guys that played the most in the playoffs (although Shake Milton and Furkan Korkmaz also saw time, especially Korkmaz) isn’t exactly hard-hitting analysis. Joe though, is a bit more of a dark-horse breakout candidate. Joe is just the quintessential modern NBA role player, a true 3-and-D guy. He was a sniper in college, and when given time he’s shown he can do it at the NBA level as well. In the G-League playoffs Joe shot 39.5% from deep on a whopping 12.7 attempts per game. Through two preseason games, Joe is 7/12 from the three-point line, and he’s got five steals and two blocks. He’s got the height and wingspan to defend well, disrupting passing lanes and hounding ball-handlers. As long as he’s not a turnstile on defense, that shooting is going to be incredibly valuable this year.

With Maxey “graduating” to the starting team, there’s room for someone to take a bench spot, and Rivers loves his all-bench lineups. Milton, Joe, Thybulle, Korkmaz, Drummond actually doesn’t mind the fact that Drummond and Thybulle can’t shoot outside with Joe and Kork being capable bombers, and in a best-case scenario Joe could even replace Danny Green at times if Joe is hot (although the weight difference is a major concern there, defensively). Joe could already be the second best three-point shooter on the team, and his willingness to fire shot after shot like Korkmaz is an incredibly valuable skill to have when filling this type of role. The opportunity and fit are there for Joe, it’s up to him to step up and grab it.