Well, it was nice while it lasted.

The Los Angeles Lakers won three straight games – all at home in the Staples Center – before falling to Phoenix in the Valley of the Sun last night.

Let’s take the wins where we can, Lakers fans.

Even the San Antonio Spurs – a win, as expected.

And, yes, the Phoenix Suns game – a Lakers loss to the Suns, came through as we would have expected it to.

But even if you’re not the driver or a passenger on the Los Angeles Lakers’ bandwagon, it was nice to see one of the one of the teams with the pressure of expectation finally come through with three straight wins – more than doubling their victory total and offering some glimpses of optimism in that has been an otherwise pessimistic start to the 2022-23 season.

And, remember, LeBron James is nursing a groin injury and played in none of these games.

So the cream rose to the top for L.A. as Anthony Davis began to look like the Anthony Davis of the asterisked bubble championship Lakers, where he was truly in MVP form.

Efforts averaging 35.5 points and 18.25 rebounds through the three wins and last night’s loss have been nothing short of impressive for Davis. His performances in the last four games have been reminiscent of the Anthony Davis that played for the New Orleans Pelicans, and the aforementioned bubble championship Lakers.

This is the Anthony Davis the Lakers thought they were getting when they convinced him to sign with them in the free agency summer of 2019.

Davis’ journey this past week began with a humbling loss to the visiting Sacramento Kings, normally a pushover game and guaranteed win for nearly every team in the NBA. Not this year. Not these Kings.

Davis put on a respectable 24 and 14 showing, but the Kings prevailed in L.A. by six and the naysayers began coming out of the woodwork. Legacies were at stake and seemingly falling by the wayside and the aging James seems to be getting bested by Father Time, despite the ongoing commercial campaign to the contrary.

Also, the loss to the Kings was L.A.’s fifth consecutive loss. Something had to change.

What a nice break in the schedule …

A fortuitous schedule over the next week – the Nets, Pistons, and Spurs – was the bright spot on the horizon. And, if this got off to the momentum they needed, it might parlay into a surprise win against the Suns in Phoenix. 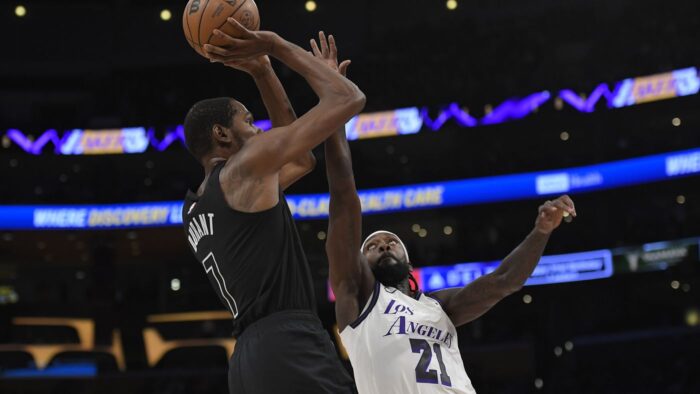 Nets 103, Lakers 116
Davis took the challenge of being the dominant player he needed to be against Kevin Durant (31 points) and the Nets, and met the challenge head on, leading the Lakers to a win against a team that the Lakers were slated to face in the 2022 NBA Finals – a season ago, when both teams disappointed their fan bases after loading for bear in the 2021 free agency period. Davis played in the paint – as he always should – scoring 37 and grabbing 18 rebounds, only shooting two shots from outside the paint, one of the drawbacks and criticisms I have long had for Davis. He’s fallen too much in love with shooting the three. 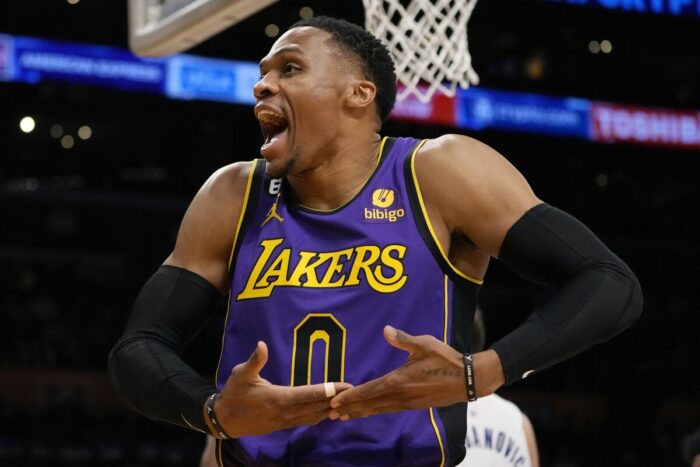 Pistons 121, Lakers 128
The game against Detroit had Davis remaining locked and loaded in his focus, as he dropped 38 and 16 in James’ third consecutive absence. And while Davis’ numbers are beginning to be where they should be on a consistent basis, something else is happening in James’ absence and Davis’ leadership – players around Davis are beginning to show up, show out, and improve. Austin Reaves pops for 16 against the Pistons and Rusell Westbrook quietly has a double double. Things are going the right direction, as they should against a young team like the Pistons. The Lakers won despite seven Detroit players scoring in double digits. 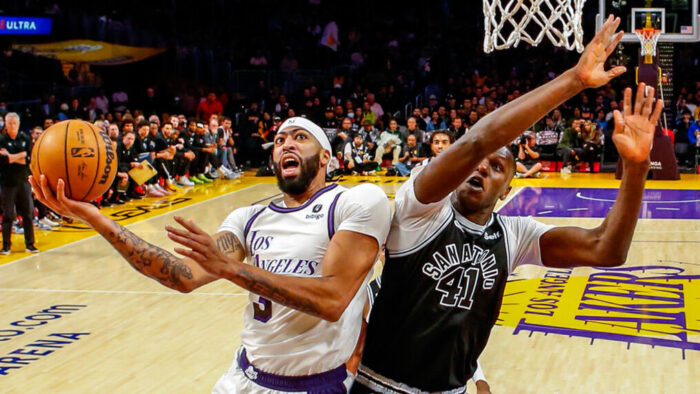 Spurs 92, Lakers 123
Davis laid back in this game ever so slightly, notching a 30 point, 18 rebound performance against the Spurs. Despite that, the lingering – and hopefully lasting – leadership effect Davis is having on the team is lifting others. The proof is in the pudding, or should I say the chocolate pudding emoji, when you look at the Spurs’ score. But we’re talking Lakers basketball, aren’t we? Davis’ example and influence on Reaves (21 points), Thomas Bryant (15 and 9), Lonnie Walker IV (14 points), Kendrick Nunn and Dennis Scchroder (13 points each), and another double double from Westbrook for a complete team win. 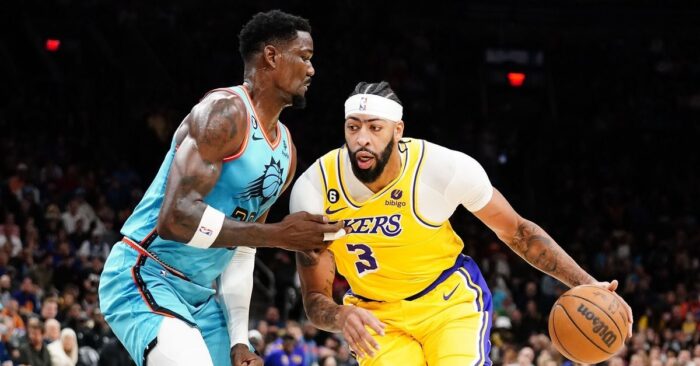 Lakers 105, Suns 115
Then came the challenge – the Phoenix Suns. The division leader. Davis had his fourth consecutive 30+ point effort and looked poised for an upset. Even had 24 from Walker, 21 from Westbrook, and 11 from Reaves. But that was all the Lakers could muster, while the Suns ran off with the game in the second half after going into the locker room with a 55-53 deficit. Devin Booker and Miles Bridges each put up 25 points, Duane Washington added 15 off the bench, while DeAndre Ayton finished with 14 and 15. The Lakers shot 42 percent to Phoenix’s 47 percent and were horrid from downtown, hitting only 4-of-22 while the Suns also hit 47 percent from beyond the arc.

Good games, experiences, and leadership to build on, and the Lakers have the next three days off to enjoy the holiday weekend … and be thankful that they have the Spurs again on Friday and Saturday evenings.

And James is projected back on Friday night.