The Shorthanded Sixers Are Battling Hard

The Philadelphia 76ers have been absolutely ravaged by injury and illness these past few weeks, but are still putting up an admirable fight. Despite being severely shorthanded, they’ve run the New York Knicks and even the defending Champion Milwaukee Bucks close, two of the top teams in the Eastern Conference despite missing over 100 million dollars worth of players. How did they do it? A combination of guys stepping up and offseason acquisitions really coming into their own, brought together by an impressive coaching performance.

Rivers in His Element 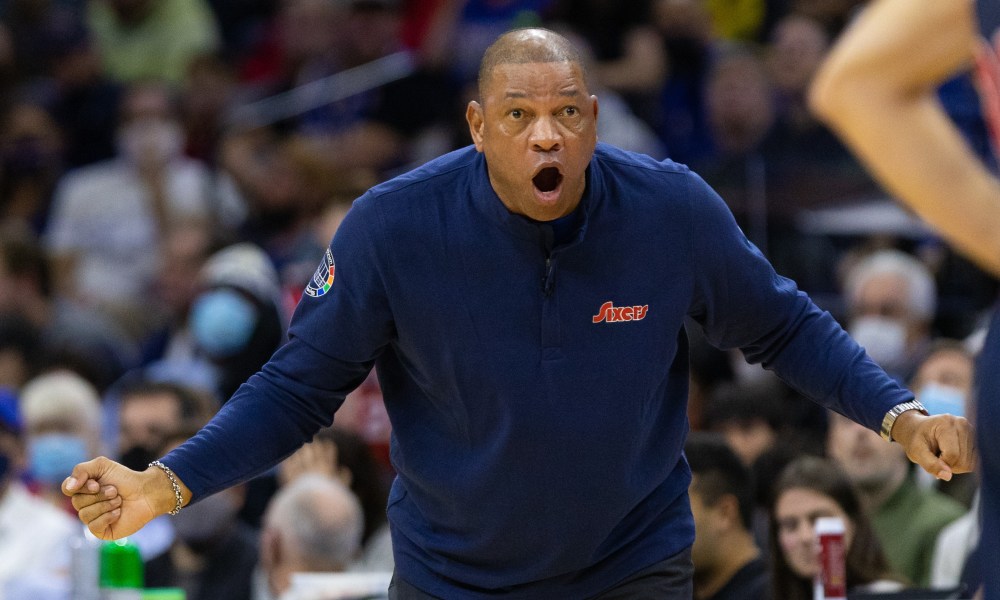 Say what you will about Rivers’ playoff record or lineup choices, when a team needs to punch above their weight and cause some upsets, few can make it happen like Doc. Something about his interpersonal motivation skills and next man up mentality really inspires the troops, and there’s been no lack of motivation or fight in the Sixers. Despite pretty much everyone having written them off the past few games, there’s no sign of that in the players themselves. They are playing hard and clearly believe in themselves to win, despite all odds. Beating the Chicago Bulls down Tobias Harris, Matisse Thybulle, Danny Green and Ben Simmons at the United Center was impressive, and then they gave the Knicks and Bucks all they could handle with Embiid out both games AND Seth Curry also out for one of those. They were down four starters and arguably the sixth man from last year’s playoff team against the Bucks, and that game went down to the wire.

Something about being underdogs seems to awaken something in Rivers. The ball is moving, and all kinds of guys are stepping up. Against the Bulls, seven different players scored double-digits, six did the same against the Knicks. It’s not just “barely” either. Five different guys (that don’t include Harris or Curry) went over 20, and Drummond had an additional 17-point game. Everyone is contributing, and Rivers is getting career games out of normally bit part players.

In terms of pre-existing players that are performing up and above, there’s quite a two major ones. Tyrese Maxey is obvious as he’s been thrust into a starting role with Ben Simmons’ continued absence. He’s still developing as a playmaker, but his scoring has been fantastic. His speed and driving ability are top notch, and his floater game is on point as always. He’s also added the makings of a three-point shot. On a limited sample size, he’s hitting 38.5% of his tries, and they are mostly on pull-up attempts, the most difficult of shot attempts. Even on the passing front, he’s supporting a 17:1 AST:TO ratio in the past three games. Considering how much Rivers likes to have guys share ball handling duties, that’s impressive.

He’s not the only longer term Sixer making waves. Furkan Korkmaz is a clear Most Improved Player and even maybe sneaky Sixth Man of the Year candidate. He’s upped his scoring and his efficiency, the last game against the Bucks notwithstanding. That one was pretty bad, but on the flipside there was the Bulls game, where he was scorching hot and dropped 25 off the bench. He was also the leading scorer against the Knicks. Korkmaz has made steady improvements each year he’s been on the Sixers (five years now) and his recently inked three-year 15 million dollar deal is looking like a steal. His confidence and quick trigger are so important in today’s NBA, and the Sixers are reaping the rewards.

Rivers has shown a clear ability to get guys to improve their games. Last year saw significant steps forward from nearly everyone on the team, and this year Korkmaz and Maxey are joining the crew. Bench scoring was a major issue for the Sixers last year, but this year it seems like a major strength. That’s not just on the improvements the guys already here made, but also from the guys the 76ers brought in. 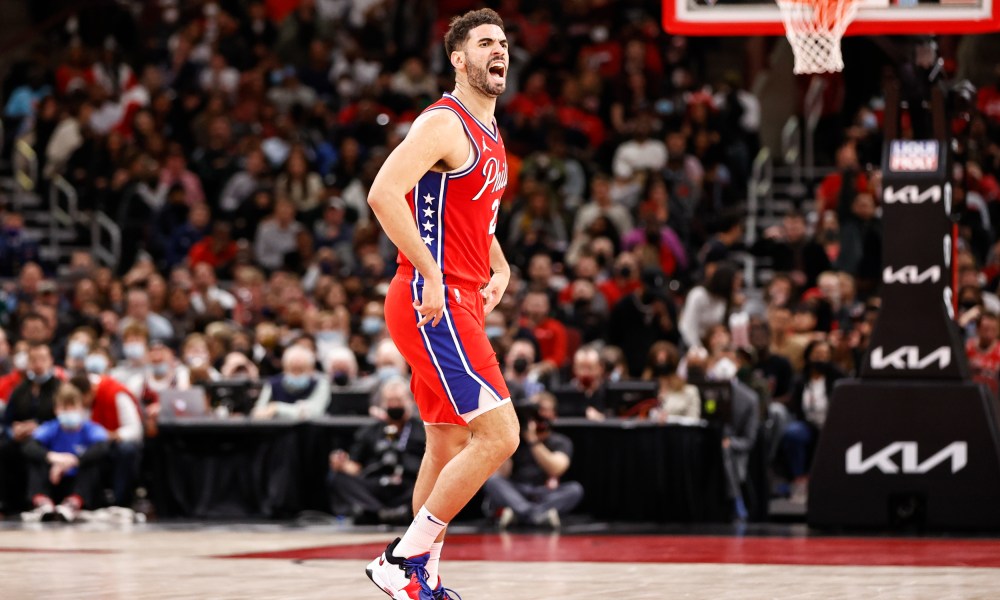 The new additions to the squad have been incredible. No one more so than Georges Niang. He was just a “stand in the corner and shoot an occasional three” guy in Utah, but with the Sixers he’s become so much more. Sure, he’s been aces from deep (hitting 41.3%), but he’s also been driving to the hoop with authority, and he’s averaging a career-high 12.9 points off the bench. That’s pretty much double his previous high. Not only has his scoring been a fantastic boon, so has his energy and attitude. Dwight Howard was a great moodmaker for the team, but with his absence there might have been a hole in that area. The Sixers have good personalities, but on the court they often fall more under the silent killer type, Embiid air-humps aside. Niang, though, wears his emotions on his sleeve, and it does wonders for the vibe. He’s hootin’ and hollerin’ out there, and the guys feed off that energy. When he’s out there hitting clutch J’s and barreling his way to another and-one everyone knows it. Niang has been an unimaginably huge upgrade over Mike Scott, and credit has to go to the Sixers’ front office and Doc Rivers for finding Niang and using him in a new way.

He’s not the only addition that’s brought something extra to the team. Andre Drummond, in his first stint as a backup, has also been top-tier. Again, Howard’s absence as Embiid’s backup could have been disastrous, as he was the franchise’s best backup since Embiid’s been in town. Drummond looks like he’s going to easily surpass that mark. Drummond has been known as a guy that gets numbers but doesn’t contribute much to winning, but so far that’s been far from the case. His rebounding is still fantastic (his past two games as a starter he’s had 25 and 20 boards, seven and eight offensive) but he’s also playing within the offense perfectly. He’s not forcing bad shots, and generally takes whatever he gets. Easy alley-oops off from Milton and Maxey collapsing the defense and put-backs are his main bread-and-butter. Even when he’s asked to handle the rock, he’s shown surprising passing aptitude, both in his vision and the difficulty of the passes he’s making. He’s not a sieve defensively either. Active hands are leading to quite a few steals (averaging second most on the team) and blocks, and he’s holding his own in the post. He doesn’t seem out-of-place or in-the-way like he’s been in the past few years, and once again credit has to go to Doc, who by all accounts was a major contributor to recruiting Drummond and getting him to buy in.

It’s been a great two weeks of Sixers basketball. They are winning games they should win, even beating some pretty solid teams in the Bulls and the Portland Trail Blazers, and the losses were incredibly encouraging. Losing to two Eastern Conference playoff locks without three or four of their best players is no shame at all. It wouldn’t have even been that bad if they had gotten blown out, which was the expectation, yet those were both games deep into the fourth. The team top to bottom looks way better, with anyone (except Thybulle, but he does his own, irreplaceable thing) able to score 20+ in any given game. Everyone looks like they’ve taken another step, and the new additions seem to be another masterstroke from Daryl Morey.

That being said, it’s not all sunshine and rainbows. While they have been struck by insane misfortune, especially on the COVID front, they still haven’t actually beat a contender yet. We’ve seen Rivers work his magic with a shorthanded squad, but come playoff time that doesn’t really matter. Losing close games with a skeleton crew is nice, but that doesn’t guarantee a win when everyone returns. What the Sixers do at full-strength is the real test, and what they do in the playoffs is the most important factor of all. They’ve literally looked better the past few games shorthanded than they did at the beginning of the season. Will Doc stick to his stubborn rotations? How will some of these guys that are excelling right now going to handle reduced shots and minutes when Harris and Embiid return? Is Drummond a ticking time bomb? Can the Sixers really make a run at this thing with a 30 million dollar hole on the bench? These pressing questions don’t have answers yet. So far though, it’s been about as good a start to the season as anyone could have ever dreamed of. COVID outbreak aside.