The Tennessee Titans need to trade for Julio Jones

With the Atlanta Falcons seeming to be set on trading Julio Jones, the Tennessee Titans would be a perfect spot for him to land

With the Atlanta Falcons seeming to be set on trading Julio Jones, the Tennessee Titans would be a perfect spot for him to land, and could be the piece the Titans need to put them over the top this season. They have not confronted the losses of Corey Davis or Jonnu Smith appropriately, and the Falcons have every reason in the world to want maximum value for Julio Jones right now.

Why the Falcons should Trade Julio

There are plenty of reasons why the Falcons shouldn’t trade Julio Jones, but let’s talk about why they should. Julio Jones is entering his age-32 season, and has missed eight games in the past two seasons, including seven last year. Jones has also regressed in yards-per-game two straight seasons. The team just used a premiere draft selection (4th overall) on a transcendent tight end prospect. Kyle Pitts should be a focal point of the Falcons’ offense even as a rookie. The Atlanta Falcons also have huge holes all over their defense. After finishing with one of the worst records in the NFL, I don’t believe they are fixing to be a contender in 2021.

Why the Titans should trade for Julio

Despite Julio Jones getting up there in age and becoming more and more brittle, the Titans are one of the best fits for him to land. Julio would not be relied on to carry the offense week after week because that is Derrick Henry’s job. Also, the Titans losses outweigh their additions by a significant margin this off-season. They lost Corey Davis (92 targets), Jonnu Smith (65 targets), and Adam Humphries (35 targets) this off-season. That is 192 targets between those three weapons they lost. Coming in, they have Josh Reynolds who had 81 targets in Los Angeles with the Rams last year, and a couple of rookie receivers in Dez Fitzpatrick and Racey McMath. It is possible Josh Reynolds can take on a bigger role than he has had so far in his career with the Rams, but they have not sufficiently replaced their losses this off-season.

Julio Jones would make this offense a true threat both running and throwing the football, while not relying on Julio Jones to be the dominant receiver he has always been known to be. The offense would remain run-heavy, but be able to rely on A.J. Brown and Julio Jones both in the passing game. This trade would create one of the best receiver duos in the NFL for Ryan Tannehill to work with. Julio Jones has averaged over 14 yards per reception every season but one in his career. Jones has accumulated 113 first downs over the past two seasons while only having played 24 games. The Titans offense would become truly dynamic and lethal making them likely repeat AFC South champions in 2021 with the addition of Julio Jones.

What the trade package for Julio could look like

The Atlanta Falcons are going to want a pretty good haul to deal their star receiver and they will have multiple bidders. They will expect at least a second round pick as the basis of any deal. I also think they’ll want a pair of high picks unless there is a significant player in the deal. The Titans do not have a ton to offer up for the Falcons on the defensive side of the football, but one name that could make a lot of sense to me is Harold Landry III. 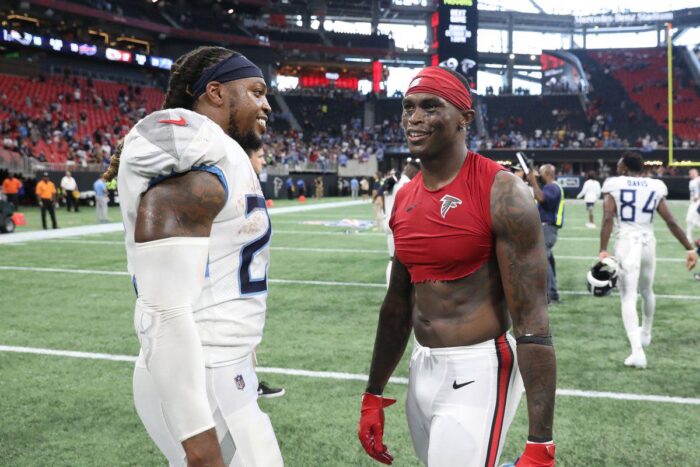 Landry took a dip in sacks going from 9.0 in 2019 to 5.5 in 2020. He is headed into his contract year and could be on his way out. Especially with the Titans having brought in Bud Dupree this off-season on a big contract. The Titans may not want to move on from Landry with hopes of contending this year, but if it means they can land Julio Jones, they may consider it. What makes the most sense for the Titans is to offer up a second and third round draft pick. However, I foresee the Falcons wanting defensive help right away. I believe a realistic trade between the Tennessee Titans and Atlanta Falcons for Julio Jones would look something like this: