Where Do the 76ers Go From Here? Part 4: Joel Embiid

The final part of a series looking at the Philadelphia 76ers future. The first part talked about Ben Simmons and the fact that they need to move on from him. The second part was on Doc Rivers, who’s propensity to choke in playoff games is concerning, but ultimately the improvements the players made and the more obvious problems that caused the playoff loss are enough for Rivers to keep his job…for now. The focus of the third part turned to Tobias Harris. A few playoff games aside, Harris had a very good season, and he proved himself a viable third option for a playoff team. Even if they wanted to trade him, what could Harris realistically get? This final part will be on the last of the 76ers’ Big Three, Joel Embiid.

What Should the 76ers Do With Joel Embiid?

The answer is obvious.  They’ll keep him and make a run for a championship for the duration of his prime. It’s what they should do and what they will do. This isn’t the end of the article though. Engage in a thought experiment with me, if you will. What if the 76ers deal Joel Embiid? The first question that immediately arises is, why would they trade an MVP level player in the prime of his career? There are a few reasons why they might trade him, but the biggest one, by far, is injuries.

Can He Stay Healthy? 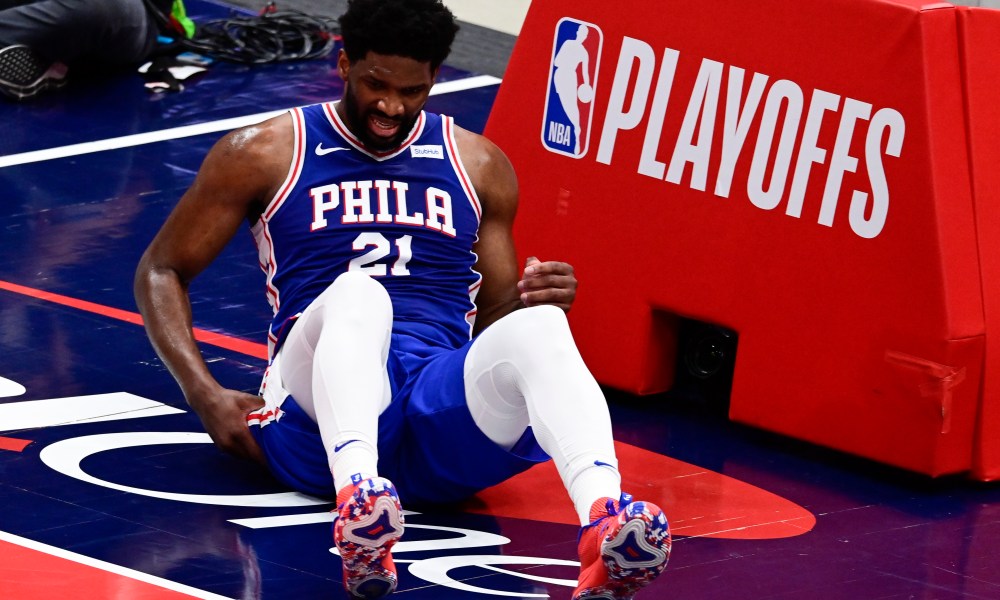 Joel Embiid is injury prone. There’s not really any way around that. He’s missed around twenty games every season since he’s been in the league. He’s had multiple knee, leg and back problems, and as a 7’0 280 pound guy that’s troubling. People of that size don’t magically become less injury prone as they get older, and in fact it’s very possible these problems compound and get worse.

As we’ve seen this year, health is really the key to winning championships, and the chances that Joel Embiid is fully healthy for a full playoff run is slim to none. Even if he’s able to play, injuries will limit him, whether it’s his minutes, the way he has to play or his effectiveness, everything is impacted. Embiid playing on a partially torn meniscus might be the healthiest you can hope for him. To be fair, that is good enough against many teams, and it should have been enough against the Atlanta Hawks, but will it be good enough to win a championship?

Is Embiid’s health a gamble you want to make year after year? Maybe there’s a magical run where he never gets hurt and the 76ers win a championship, but there’s a lot of reason out there to doubt that ever happens.

Health is the biggest concern for Embiid and the 76ers’ championship hopes, no doubt about it. Other concerns do still exist however. Positions are nebulous, and Jalen Rose often says the traditional 1-5 was made up for fans to understand that game better. If we stay within those traditional confines though, when was the last time a team who’s best player was a center won a championship? One could easily argue for the Los Angeles Lakers with Anthony Davis, but he himself doesn’t seem to like that role, and I’d argue LeBron James is still their best player. Then before that, you had Kawhi Leonard and the Toronto Raptors, Stephen Curry or Kevin Durant for the Golden State Warriors, LeBron again and Curry again before we get to the San Antonio Spurs and Tim Duncan.

Duncan is often considered a power forward, but calling him a center is fine. Was he their best player though? Perhaps, but the Spurs were often a collaborative effort, with Tony Parker, Manu Ginobli and a young Kawhi Leonard contributing a similar amount as Duncan. Still, the bigs can have that one. If we go back a few more years, we have LeBron, Dirk Nowitzki and Kobe Bryant to round out the last decade of basketball.

In that time, only one championship team was led by a center, if you can even call it that. If you want to extend the category out to all big men, you could also include Dirk and the Dallas Mavericks in 2011, but he plays very differently from most big men. The point is, the game has changed to be very perimeter oriented, and it’s possible a team whose best player by far is a center simply cannot win anymore.

Being a Center is Really Hard

Why can’t centers win anymore? It’s a valid question, but the NBA has seemingly moved past the post ups and that style of isolation ball. The modern NBA team basketball is all about pace and space, two things that centers don’t really participate in. Even when you go into isolation mode, which is still a big part of the game, it’s much harder to double a perimeter player in isolation than a post guy. Teams can send two, even three guys at Embiid, and finding players across the court from the post is much more difficult than doing it from the perimeter.

Perimeter players also get the benefit of being able to hunt for switches. With enough picks, a perimeter player can often get a much more favorable matchup. Look at how many times the Hawks were able to find Seth Curry and abuse him, or get Gallinari against someone like George Hill. Or how about the number of times Trae Young can get a screen and then get Ben Simmons or Matisse Thybulle on his back leading to easy foul shots, or force Joel Embiid to step up to him which leads to an easy lob.

Teams can also deny centers the ball much more easily than perimeter players. If Embiid gets the ball in his position down low, it’s almost an instant bucket. The problem is getting it there. Teams can go all out to deny the entry pass down low, which forces Embiid to go further and further out to receive the ball. This makes him settle for jumpers more often, or be forced to put the ball on the ground which leads to turnovers. Embiid averaged 4.7 turnovers per game against the Hawks, and had eight in game six and seven, including the back breaker to Gallinari in the dying embers of the final contest.

Finally, unless you have a once-in-a-lifetime passing talent like Nikola Jokic as your center, ball movement really suffers when you have a center as the focal point of your offense. Embiid got better at passing out the post, but it’s still not great, and the ball often gets stuck down there. It often feels like Embiid isn’t really a part of the offense. On any given offensive possession, it’s either the four guys besides Embiid do their thing, or the ball goes to Embiid and the other four stand around. That could be a failure of the coach to get Embiid involved, or a failure of the players around him to help Embiid, but there’s a disconnect somewhere. How often did John Collins and Clint Capela get easy buckets? Then think about how many easy buckets Embiid gets in a game. It’s close to zero, and every single basket he makes is a tough shot, or one he had to work incredibly hard for.

It doesn’t seem like a sustainable style of play, and when Embiid gets cold from the midrange and he can’t get his postups for one of the many reasons discussed already, the Sixers get very cold as well.

Realistically, Embiid isn’t going anywhere. For all the flaws mentioned, Embiid is one of the best players in the NBA, arguably THE best. He’s an offensive mismatch, able to take on anyone down low while also having a wet midrange jumper and a serviceable three point shot. He hits free throws at a fantastic clip, and he’s also a defensive force. Moving on from him when he’s just 27 would be ludicrous, especially coming off his best season and seeing all the improvements he has made over the years. If he played enough games he would’ve been the MVP for goodness sake. Who has ever heard of a team trading an MVP away?

That being said, Embiid’s value will never be higher than right now. With the haul they could get for Embiid, they can transform this team over night. There’s a future out there, one out of 14 million where the 76ers trade Embiid, realizing that he’s too injury prone, or that traditional centers like Embiid cannot be the best player on a championship team in today’s perimeter centric NBA. Instead of toiling for years with Embiid, always falling short in the playoffs because Embiid can’t play at 100%, they create a dynasty with the five unprotected first round picks and whatever star player they want. Instead of CJ McCollum from the Trailblazers, how about Damian Lillard, Norman Powell and Jusuf Nurkic with a boatload of picks?

It won’t happen, and to be clear I’m not saying it should happen. Trading Embiid would be certifiably insane after the year he had. But What If?