Sorry To Burst Your Bubble Yankee Fans, But Gleyber Torres is Not an Elite Shortstop 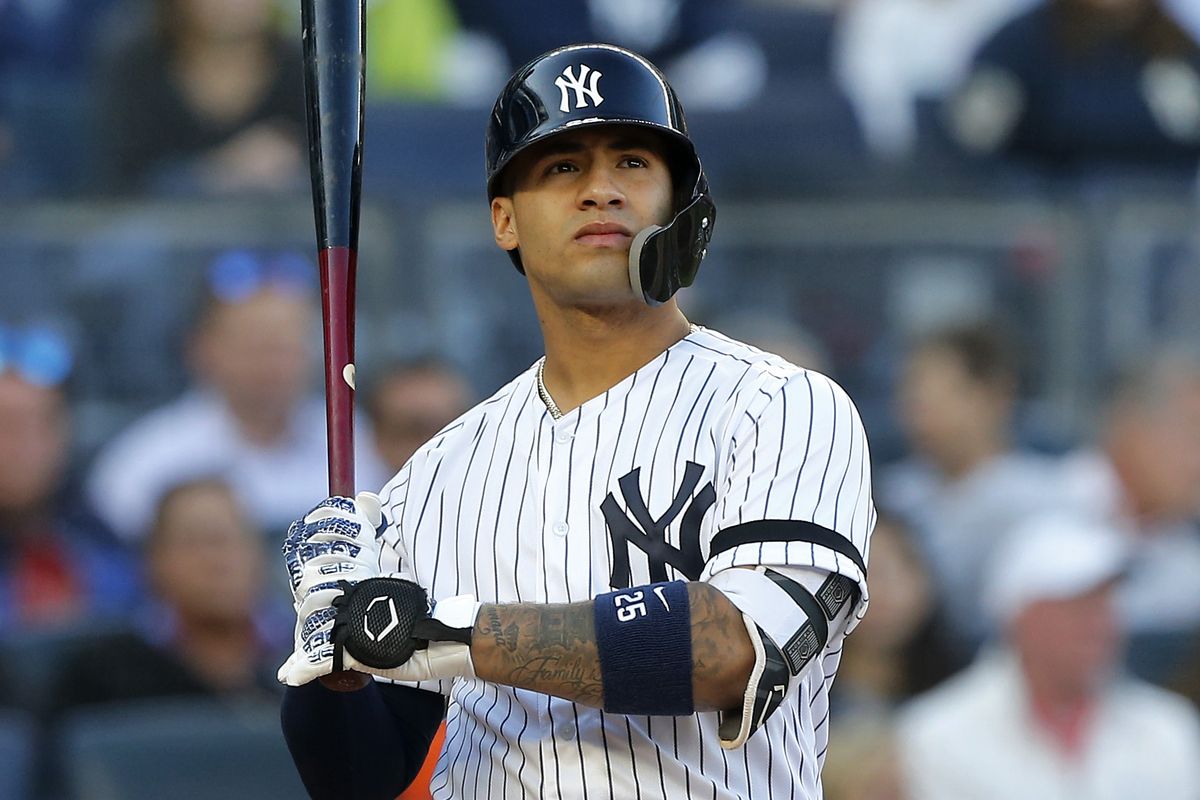 Disclaimer: If unsure about any of the stats in the article, please check the key

There is a lot of understandable concern in the U.S. right now. For many, this tension can be very overwhelming. If you need a break from the outside world, and to a much lesser extent, the constant back and forth between the MLB owners and players, do I have a pitch for you!

Without an MLB season right now, many baseball twitter handles have been making their top player lists. A decent portion of these lists declares that Gleyber Torres, the prize of the Aroldis Chapman trade to the Cubs, and the shortstop that hit 38 HRs in his age-23 season, is overrated. They also claim that he is not even a top-5 shortstop in the game. Fellow Backsportspage contributor Henry Winkelhake and I chose Torres as our #7 picks on our top-10 shortstops episode of the Exit Velo podcast, long before we saw these claims. That being said, a fair number of people in the baseball world believe Gleyber Torres is not an elite shortstop because he is not at the same level as his counterparts. As a result, what is holding Torres back from greatness?

As Didi Gregorius was injured for a large portion of the 2019 season, Torres moved from second base to shortstop. The Yankees also had an excellent year both offensively and defensively from second baseman/utility infielder DJ LeMahieu. Since the Yankees already had a shortstop and second baseman on their team, they did not re-sign Gregorius last season and made Torres their primary shortstop. Although Torres has an excellent bat (a career 123 wRC+ hitter in the Majors meaning that he is a better hitter than 23% of the league), his glove has always needed work, especially at short. Whether or not you are a fan of traditional stats or advanced stats, Torres has been a poor defensive player.

Fielding percentage (FP) shows how many of the plays are made without an error (i.e. a 1.000 FP means that every play fielded did not result in an error), and this stat has been around a long time before sabermetrics. Torres’ .928 FP at shortstop was second to last in 2018 among players with 150 innings played. In 2019, Torres’ .961 FP at shortstop was ranked 26th out of the 30 shortstops with at least 650 innings played.

Middle infielders, such as shortstops, generally can swipe their fair share of bases, but Torres is not one of them. The most obvious reason of course is that Torres plays for the Yankees, and they just do not steal bases anymore, especially with the sharp spike in home runs. Why risk stealing a base when nearly every guy behind you can hit it out of the park? Unfortunately, this is not only the Yankees philosophy; stealing fewer bases has become a common trend for all MLB teams. Consequently, Torres stole as high as 22 bases in Single-A but is unlikely to repeat that mark in the Majors. As expected, Torres has only swiped 11 SB over his first two years, which ranks him 22nd out of 25 qualified shortstops.

Although stolen bases are becoming less frequent, baserunning is still an important part of baseball, especially on advancing extra bases. For example, speedy players can often advance from 1st to third on a single, or score from first on a double. Thus, sabermetrics such as baserunning runs, or BsR have taken into account how aggressive players are on the basepaths.

Once again, Torres ranks poorly when compared to his peers. In his first two years of the Majors, Torres has -1.5 BsR, which places him 23rd out of 25 shortstops. A possible explanation for Torres’ poor baserunning is because of his below-average sprint speed. The average sprint speed for a shortstop is an absurd 27.5 ft/s. Meanwhile, Torres had a sprint speed of 26.5 ft/s in 2019 (48th out of 56 shortstops among ten competitive plays). Therefore, Torres is a below-average runner.

Within every statistical category, Torres drastically improved when facing the Orioles. Compared to the 24 other qualified shortstops during the 2019 season, Torres’ ranking improves especially in HRs (9th to 2th) and OPS (14th to 5th). The seismic increase in HRs and OPS show that Torres is not as good of a hitter as his overall 2019 statistics indicate, and thus cannot be an elite offensive shortstop.

Although Torres is not a top-5 shortstop, he ranked tenth in his position fWAR (3.6) last season. MLB arguably has the most talented group of shortstops in baseball history. No longer are shortstops just great defenders with a little power, they are the whole package. They can hit, run, and field just as good, or even better than any other position in Major League Baseball. Exceptional shortstops such as Francisco Lindor, Trevor Story, Paul DeJong, Trea Turner, Javier Baez, and Xander Bogaerts are all better players than Torres. So, the question remains…

Will Torres ever become an elite shortstop?

First, let’s take a look at his offensive projections. Torres plays in a hitter-friendly Yankee Stadium, and plays in the AL East, where only the Rays have a respectable starting rotation for the next few years. He has not yet reached his offensive ceiling since players tend to peak around their late 20s. That being said, there is a good chance he can become a perennial 40 HR player, which would be incredible. As a matter of fact, when Torres reaches 40 HRs, he will hold the most home runs by a Yankee middle infielder (Alfonso Soriano holds the record at 39 HRs).

Additionally, his batting average and slugging percentage should also improve if his power numbers increase. As for his OBP, he still needs to improve his slightly below average BB% (12th among 25 qualified SS over his first two seasons). However, there is still hope! Although his BB% decreased from 2018 (8.7 BB% to 7.9 BB%), he has swung at fewer pitches outside the strike zone (33.7% to 32.6%) and more pitches inside the strike zone (66.2% to 74.1%). Therefore, his OBP should be higher when baseball returns.

Furthermore, over the past two seasons, if you were to normalize Torres’ insane numbers against the Orioles in 2019, he would be the seventh-best qualified shortstop by wRC+. Thus, Torres has the ceiling to become an elite offensive shortstop, at the very least.

Defensively, Torres may never be exemplary. So far in his career, his peripherals about his defense are not terrible compared to the rest of the league, but at shortstop he ranks among one of the worst defenders. In other words, there are a lot of good fielding shortstops such as Torres, but they are overshadowed by elite fielding shortstops such as Andrelton Simmons, Paul DeJong, Francisco Lindor, and Javier Báez.

Moreover, when Torres was acquired by the Yankees his scouting report indicated that he probably should not play at shortstop for the long haul. To give Torres some credit, he did improve at shortstop from 2018. His FP (.928 to .961), DRS (-2 to -1) and UZR (-2.6 to -2.1) all increased even though he played over fifty more games at shortstop in 2019. Thus, Torres has proven that he can mature defensively.

Baserunning wise, there are not too many peripherals that indicate Torres will improve on the basepaths. His scouting report before joining the Yankees said that although Torres had a slow first step, he had good acceleration. In other words, Torres is about an average runner when he is at his best. Although the decrease in his spring speed from 2018 is concerning (27.1 ft/s to 26.5 ft/s), especially when he had a lot more plate appearances last year, you do not have to be the fastest to be a good baserunner. Better reads off the pitcher and healthier leads on the basepaths go a long way, but also improving a slow start could certainly help.

Overall, Torres is not yet an elite shortstop as his fielding and baserunning metrics have a long way to go. Nonetheless, he can become a respectable defender at shortstop, and at best an average baserunner. Although Torres posted Ruthian numbers against the Orioles, Torres is still an above average offensive player with a high ceiling. He is not even close to his prime yet, and will remain a cornerstone player with the Yankees for years to come. If Torres can meet or even exceed these projections, he could just be the difference maker after an eleven year World Series drought.

BsR: An all-encompassing sabermetric that takes into account all possible baserunning plays.

fWAR: Wins Above Replacement from Fangraphs. For example, If a player has 0.1 fWAR they are worth 0.1 wins more than a replacement-level player (0.0 fWAR).