Quarterback Dak Prescott could now return within four to six from his thumb injury. This is great news out of Dallas after he was expected to miss in the range of six to eight weeks.

The 4- to 6-week timeline would have Dak Prescott back before the Week 9 bye, perhaps even as soon as an NFC East showdown on Oct. 16 at Philadelphia.

For now, the plan is to roll with Cooper Rush starting Sunday against the #Bengals. https://t.co/Pfd7wrYw2R

Prescott certainly struggled against Tampa throwing for only 134 yards and an interception. But the Cowboys will only have a chance to win the NFC East with him behind center. The offense started slow and Dak isn’t the sole blame for that. The receiving core is not what it should be right now and that is a whole different issue that needs to be addressed.

Prescott would be set to return against the Philadelphia Eagles on Sunday Night Football if he misses a minimum of four weeks. Jerry Jones seems pretty optimistic about Dak’s recovery time and return.

“If we thought he wasn’t going to be ready to go until after four games, we would put him on IR. We’re not doing that,” Jones said on 105.3 The Fan this morning.

Cowboys fans should love hearing the positive news because it means this season is still salvageable after their disastrous start. While it’s good that Dak will return sooner than possible, what does it mean in the meantime for the quarterback position? 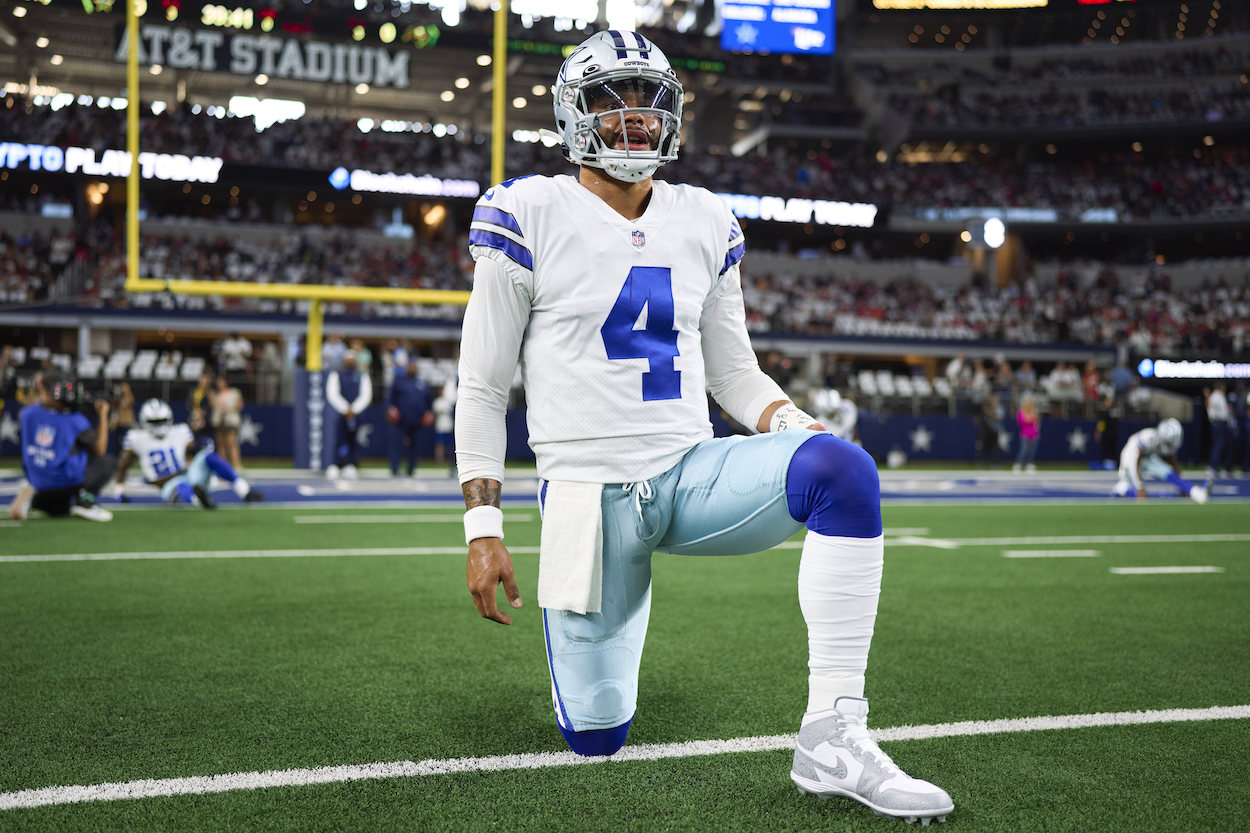 As of now, it seems like the Cowboys have their full trust in five-year veteran Cooper Rush. The Central Michigan alum threw for seven of thirteen and 64 yards after Prescott went out on Sunday. He also won a game against the Minnesota Vikings last season in primetime. Rush may have the capabilities to keep this team afloat for the time being. Although the offense did not look good with Prescott, how will it look with Rush at the helm?

Should Dallas Bring in Another Veteran?

The Cowboys could always go out and find another veteran quarterback. However, Jerry Jones does not look for outside help often and would rather trust the guys he already has on his roster.

The thought of trading for San Francisco 49ers QB Jimmy Garoppolo seems certainly out of the question for now due to Dak’s return timetable. It would not be worth it to trade a high-round pick and have the controversy of who to start when Prescott returns if Jimmy G has success.

Another name that has been floating around is bringing in longtime Carolina Panther Cam Newton. The former MVP is surely not what he once was but he could be serviceable for Dallas’ offense for the time being.

One last name that has been floating around is 17-year veteran Ryan Fitzpatrick. Although he is retired, the Cowboys could convince him to come back and get behind center. Fitzpatrick is known to thrive in these times of situations where he has to come in and play unexpectedly. It wouldn’t be the worst decision the Cowboys have made in 2022.

While Prescott is out the next four games include the Cincinnati Bengals, New York Giants, Washington Commanders, and Los Angeles Rams. If Cooper Rush could go .500 the Cowboys will still be in decent shape this season. The whole NFC East got off to a hot start and games against the Giants and Commanders will not be “give me” wins.

Once again, great news out of Dallas with Prescott’s timetable to return is quicker than expected. The Cowboys will look to keep the team above water in his absence. The first test for the “Dak-less” Cowboys is against the reigning AFC Champions, Cincinnati Bengals on Sunday at 4:25 p.m. EST.