There have been some ugly teams winning NBA championship – one only has to think of the 1977-78 Washington Bullets, who finished the regular season at the 44-38 mark.

Then you have the beautifully constructed and orchestrated 2015-16 Golden State Warriors, who cruised through the season to a record-setting 73-9, only to fail to win the title that season.

This year was supposed to be the Battle of the Super Teams, right? 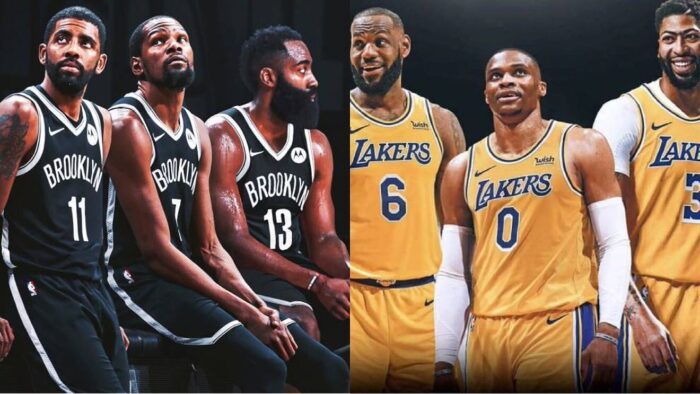 But when it came to NBA championships, none felt better to the general populace that the homegrown Milwaukee Bucks’ title run last year, one that had been building and building, and was fueled by Giannis Antetokuonmpo signing his extension and pledging to bring Milwaukee a championship – a promise he fulfilled just a few months ago.

Both teams were in 50+ year droughts.

But it’s the record of the champs that’s alarming, because Antetokuonmpo bulked up over the summer, so I expected total destruction in the paint this season – like the playoffs, when he was playing on a hyperextended knee, that he later admitted he shouldn’t have. 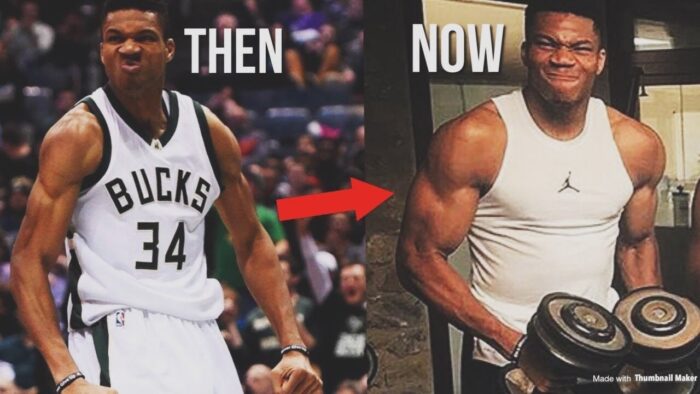 Today, he seems meow like the Giannis Antetokuonmpo of 3-4 years ago – regressing, not the heart and bulk of an improved champion and Finals MVP.

Granted, the problem isn’t all Giannis Antetokuonmpo. However, the onus always lies on the shoulders of the leader.

Not only do you need to constantly hone your leadership skills, but you must also maintain poise under pressure and learn to adapt to various situations. Like any successful leader, you don’t have to do it alone.

That’s where the injury bug comes in. 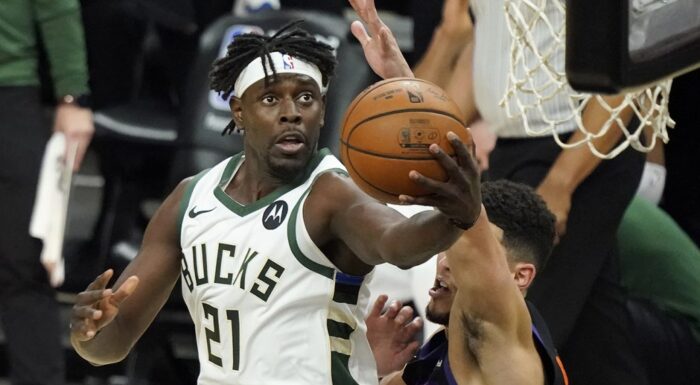 Last night’s loss to Utah, the Bucks’ third consecutive, was a result of not having half of their lineup healthy and available (though Bobby Portis did look good with 15 points and five rebounds off the bench).

Middleton’s was short-term, but the rest of the Bucks have been through the first two weeks.

They’re struggling, but they’ll be back.

Bear Bryant once said, ‘if you believe in yourself and have dedication and pride, and never quit, you’ll be a winner. The price of victory is high, but so are the rewards.’

NOTE:  Washington Wizards head coach Wes Unseld, Jr.’s father – Wes Unseld – was part of that 1977-78 championship team, along with Bob Dandridge and Elvin Hayes. Junior has the Wizards at 5-1, tied for first in the Eastern Conference – keep your eye on them. 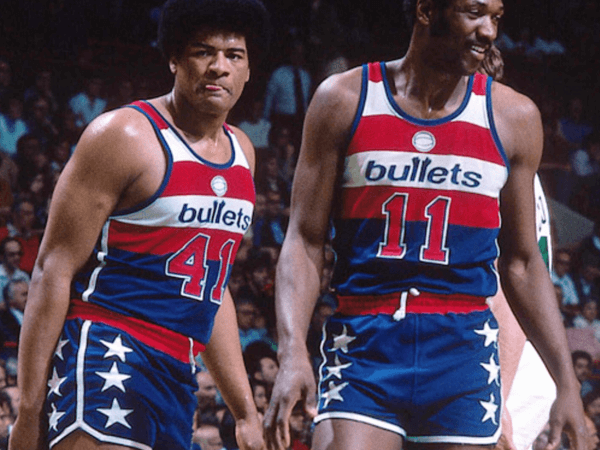 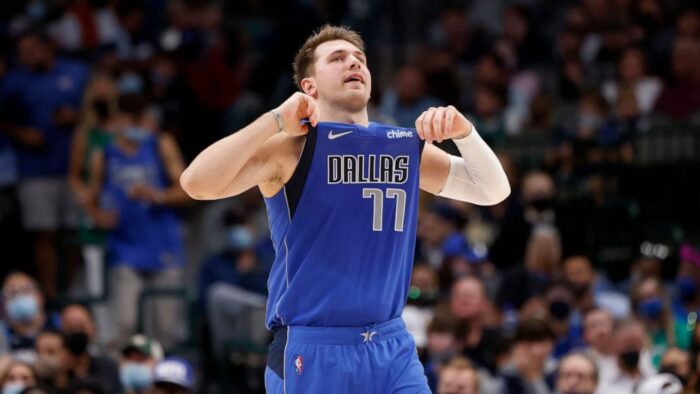 After the turd they laid in the foothills of the Rocky Mountains on Friday night, you’d hope the Dallas Mavericks would have bounced back with a win back home in Dallas. Thankfully, the Sacramento Kings were in town and underperforming as the Kings oft times do, which opened the door for Luka Doncic to hit a long, critical three pointer and the Mavericks to notch a win to redeem themselves. Doncic finished with 23 points, eight rebounds, and 10 assists to lead Dallas. Tim Hardaway, Jr. had 16, Dorian Finney-Smith added 13, and Frank Ntilikina finished with 12 to cement the win.

NEXT UP
Kings at Jazz – Tuesday
Heat at Mavericks – Tuesday 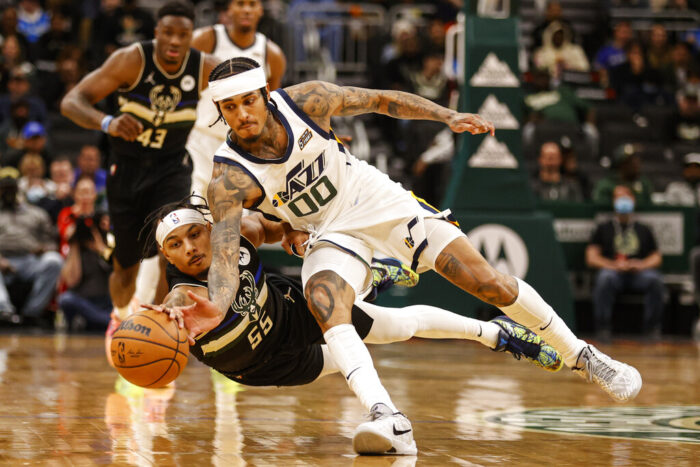 The Milwaukee Bucks are officially roadkill as they lost their third straight game last night, this time to the visiting Utah Jazz. The Jazz bounced back from a road loss down the interstate to the Chicago Bulls with a resounding thumping of the reigning champs. The Jazz came out 57-48 in the first half, and then poured salt on the wound with a 27-21 third quarter that helped them sail to the win. Donovan Mitchell led all scorers with 28 points, Mike Conley finished with 20 points, Jordan Clarkson picked up 15 off the bench, and Bojan Bogdanovic had 14 points and five rebounds to put the Jazz back in the win column. Giannis Antetokuonmpo led the depleted Bucks with 25 points, seven rebounds, and six assists.

NEXT UP
Kings at Jazz – Tuesday
Bucks at Pistons – Tuesday 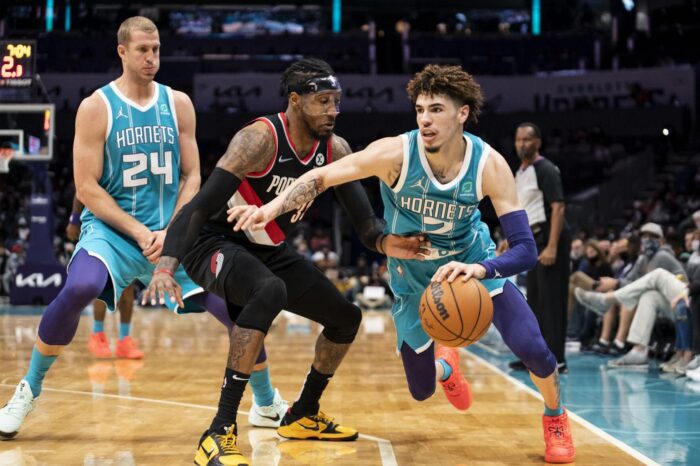 The Portland Trailblazers got balled up by second year talent LaMelo Ball, who led the Charlotte Hornets to their fifth win in seven games, adding to one of the franchise’s best starts in history. Six Hornets scored in double figures. Along with Ball, Kelly Oubre, Jr. added a 26 point, seven rebound, five assist night. The Hornets also got 19 points from Miles Bridges, P.J. Washington had 17, Terry Rozier chipped in 14 points and five assists, while Gordon Hayward finished the night with 12 points. C.J. McCollum led the Blazers with 25 points and eight assists. Damian Lillard added 13 points and 12 dimes in Portland’s third loss, dropping the Blazers to the .500 mark.

NEXT UP
Trailblazers at Sixers – Tonight
Cavaliers at Hornets – Tonight 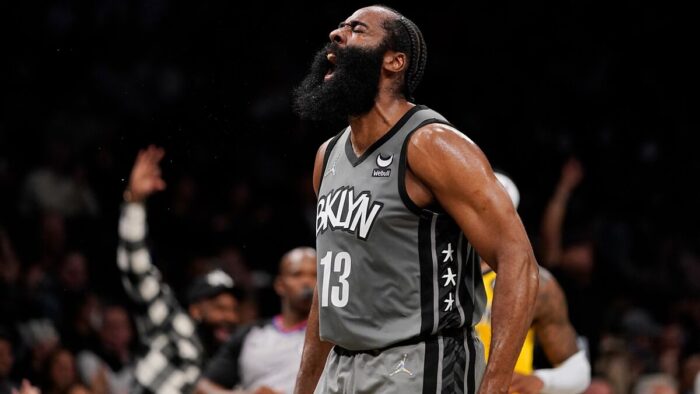 It appears Cade Cunningham’s appearance in Saturday night’s game was a cameo at best, with only two points and no return engagement last night in Brooklyn. The Detroit Pistons are continuing to monitor Cunningham’s ankle before turning him loose on the league and having him carry the cross for the team. Meanwhile, Kevin Durant led the Brooklyn Nets with 23 points before his ejection from the game, and James Harden is finding his groove again, last night scoring 18 points, 10 rebounds, and 12 assists for his 59th career triple double – tying Larry Bird – as the Nets beat up on the Pistons like it was destruction derby night at the Barclays Center. Harden is the all-time leader for triple doubles for Brooklyn with 13.

NEXT UP
Bucks at Pistons – Tuesday
Hawks at Nets – Wednesday 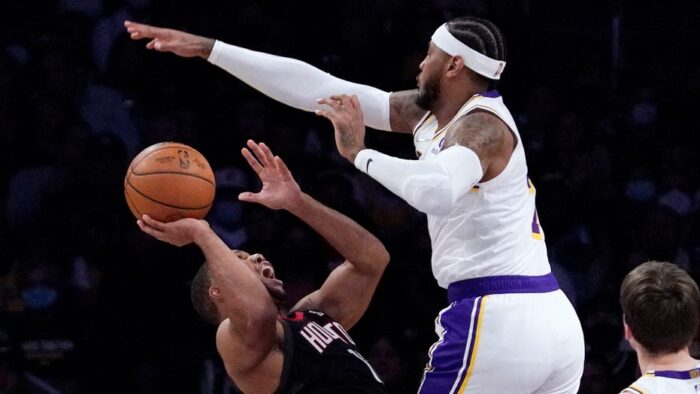 The Los Angeles Lakers jumped all over the visiting Houston Rockets like one would expect to be greeted in L.A. – with an assault. The Rockets were smother 75-54 through the first three quarters, and that’s considering that the Lakers’ 95 total points were a low for them. With Anthony Davis (16 points, 13 rebounds, .412) and LeBron James (15 points, .316) shooting poorly and scoring in the teens, Carmelo Anthony came in off the bench and provided the juice for the Lakers, hitting .571 and leading all scorers with 23 points. Russell Westbrook added 20 points, eight rebounds, and nine assists, while keeping the turnovers to two as the Lakers are assimilating well, and stepping up for one another, Christian Wood finished with 16 points and 13 rebounds in the loss, Houston’s fifth in six games this season. These two teams play again tomorrow night – same bat place, same bat time, same bat channel.

NEXT UP
Rockets at Lakers – Tuesday 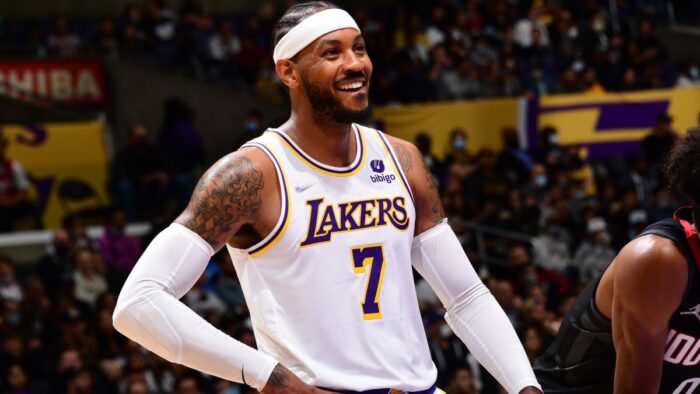