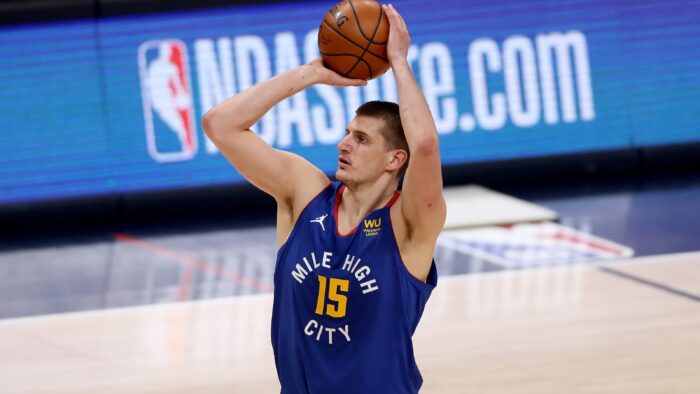 Along with Kevin Durant, Demar DeRozan, Steph Curry, and Giannis Antetokounmpo, Denver Nuggets center Nikola Jokić is irrefutably a lead contender for MVP. Not just because the crowds chant MVP at Jokić at various stadiums or because he was also last year’s MVP, but this season has been trying for Denver as a whole. The most consistent variable in the Mile-High City has been Jokić’s tenacity and resilience.

All teams have been plagued with health and safety protocol issues. Furthermore, Jamal Murray is still out indefinitely and Michael Porter Jr. just underwent back surgery. The coaching staff doesn’t want to rush Murray back on the floor and Porter Jr. may be out for most of next season. With this amount of disarray, coaches have to experiment with players taking different roles. Shooting guard rookie Bones Hyland has been placed in the point guard position. Usually playing center JaMychal Green has been more at the ‘4’.

With the position switches, Jokić has continuously been a playmaker for this team. Point guard Monte Morris called Jokić the “most unselfish guy” Morris has ever played with.

The Nuggets are currently seventh in the Western Conference (18-18). Starting in 30 out of 36 games this season, Jokić has not limited himself to his center position. Averaging 25.7 points, 14 rebounds, 6.9 assists with a 56.3% field goal average just this season, the MVP title should remain the Joker’s.

Head Coach Mike Malone and Jokić have a special relationship. Jokić says they “can just look at each other” for communication.

“He’s the anchor of our defense,” says Coach Malone. “Jokić has the ability to make everyone better and we see that when he is on the floor.”

Assistant Coach Popeye Jones paid an even greater compliment to the Joker after Jokić carried the Nuggets in the loss against the Utah Jazz.

“He is a special guy. He’s the type of guy that if I had a daughter, I would want my daughter to bring Nikola Jokić home,” said Coach Jones speaking to Jokić’s sportsmanship and character regarding the loss versus the Jazz.

The Joker led in scoring with 26 points and 11 assists. Yet, the game still resulted in a loss.  However, Jokić understood that his teammates did the best they could do.

The Nuggets as a team do not have the tools to win the Western Conference. However, Jokić’s effort is the catalyst of energy. Also, the Joker is shaping the culture of the entire team, which is MVP worthy.