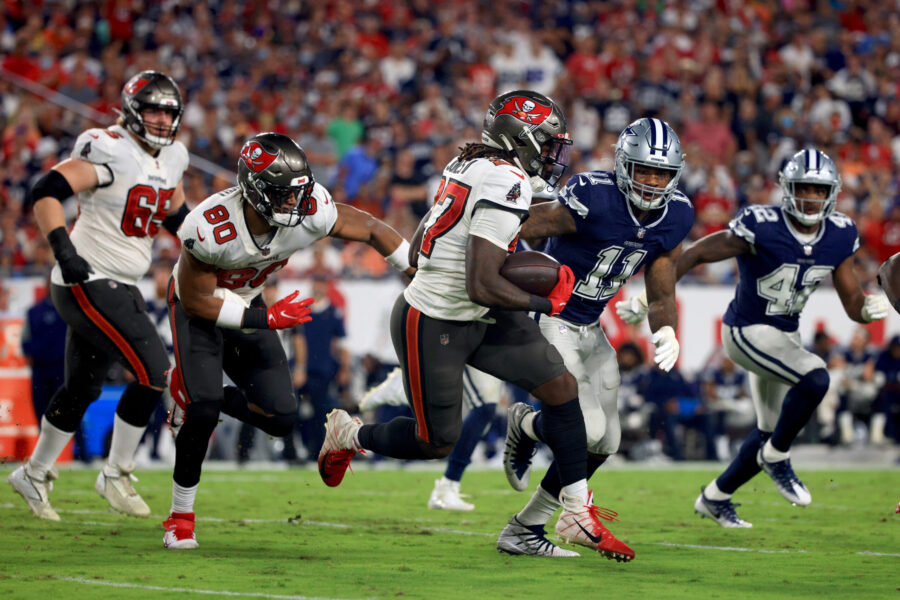 In two consecutive seasons the NFL offices determined that Tom Brady and the Tampa Bay Buccaneers taking on America’s team warranted the spotlight of a week one primetime matchup. They struck gold on the first attempt, screening a hotly contested 31-29 Tampa victory that came down to the very last drive.

The second attempt resulted in another Tampa victory and one more forgettable Sunday Night Football matchups of the season. In a 19-3 snoozer, neither QB’s performance came close to their electrifying 2021 battle, leaving Buccaneers fans in bittersweet confusion and Dallas fans in a rare stunned silence.

Their third matchup in two seasons may include the worst version of each team in that span. While Dallas piled up 12 wins, they haven’t had anything resembling a dominant win since early December against what many would consider to be the NFL’s single worst team, the Indianapolis Colts.

Their record since then, while cosmetically decent at 3-2, fails to tell the whole story:

Week 14: Held on to beat the devastatingly aimless Houston Texans on the game’s final drive. 27-23

Week 15: One of Prescott’s league-leading 15 interceptions resulted in a pick-six in Jacksonville, sending Dallas home with an overtime loss. 40-34 OT

Week 16: Beat a Gardner Minshew led Eagles team in a shootout that came down to the last drive. 40-34

Week 17: Took all four quarters to put away a Titans team led by a 3rd string QB in hist first NFL start. 27-13

Week 18: Got blown out by the division rival Commanders who were playing their 3rd string quarterback, again, in his first ever NFL start. 26-6

Dallas played two starting quarterbacks in their final six games (if you’re generous enough to consider Matt Ryan a starter), and lost to the better of the two in Trevor Lawrence.

Thankfully for the limping Cowboys, they may have quietly gotten the best possible NFC playoff opponent in the Buccaneers.

The 2022 Tampa Bay Buccaneers are far and away the worst team Tom Brady has ever had his name attached to at 8-9. In fact, the only other time Tom Brady finished a season with less than 10 wins was in his first year as a starter in 2002 (9-7).

While Brady flirted with the elusive 5k passing yard mark and kept his TD-INT ratio above 2-1, his average depth of pass attempt was the lowest of his career at just 6.4 YPA (Rotowire.com).

Statistics aside, they were just unpleasant to watch. One of the season’s few highlights came in week 17 when Brady and Evans showed a rare and sudden flash of their 2020 deep connection en route to a division-clinching win over the six-win Carolina Panthers.

While half of Dallas’ wins were against teams with a winning record, the Bucs managed to beat just two winning teams in the 2022 regular season, the first being the Cowboys in week one and the second being the Geno Smith led Seahawks in Munich, Germany.

The numbers dictate, for the most part, that Dallas should roll past the middling Bucs effortlessly. The only thing holding the 2022 Cowboys back from a deep playoff push is themselves.

While the organization may appear to be cursed by something beyond the control of Jerry Jones or any Dallas supporting mortal, this is not the same team that fumbled the field goal late against Seattle.

This is not the same team that was taken down by Aaron Rodgers in the Divisional Round twice in three years. It is certainly not the same team that allowed over 200 rushing yards to the Los Angeles Rams on their way to Super Bowl LIII. Only Tyron Smith, Zach Martin, and Demarcus Lawrence have been with the team since their 2016 first seed failed playoff push.

This time last year, the 12-5 Cowboys collapsed in the Wildcard to the San Fransisco 49ers in Dallas. They played scared and didn’t resemble the team that had outscored opponents 150-71 in the four weeks leading into the playoffs.

History would dictate that Tom Brady and his 7-0 career record overtake the Cowboys in a close game. In the same timespan that Brady has appeared in ten Super Bowls (7-3), Dallas has appeared in eleven playoff games (3-8).

However, if football is a meritocracy, the 12-5 Cowboys should roll into Tampa on Monday night and send the Bucs into the offseason to reside with the rest of the sub .500 organizations, and possibly jumpstart Brady’s travel plans for Vegas or South Beach.

Enough Is Enough
Cowboys vs 49ers: Divisional Round Preview