Have The Lightning Cracked The Khudobin Code? 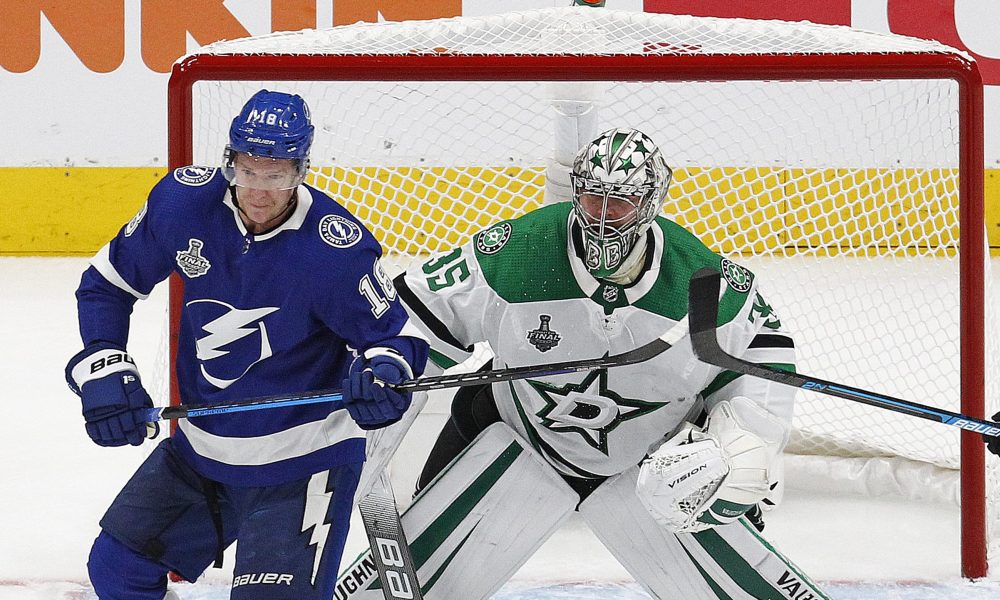 To say that Dallas Stars goalie Anton Khudobin has been the biggest surprise in this year’s NHL playoffs would be underselling to say the least. The Stars goalie has been fantastic, making acrobatic saves on a nightly basis.

Ben Bishop, the usual man in net for Dallas is the unquestioned starter when healthy. When Bishop got hurt, yet again, it was believed that with Bishop went the Stars Stanley Cup hopes and dreams. Enter Khudobin, the goalie from Kazakhstan, to save the playoffs so far for the Stars.

In Game 1, Khudobin was fabulous yet again. The Lightning, fresh off another hard fought OT win against the NY Islanders less than two days before, looked sluggish for the first two periods. The Stars took advantage and carried the play jumping out to a 3-1 lead headed into the third period. The final period was a completely different story however.

The Lightning managed to tilt the ice completely in their favor, outshooting Dallas 22-2 and 36-20 for the game. Nonetheless, the Bolts simply could not beat Khudobin.

Shot after shot, chance after chance the Dallas goalie repelled them all. This was of course nothing new based on his play all playoffs. Khudobin came into the Finals with a sparkling .922 save %. That stat is impressive on its own, but when you consider he’s faced by far the most shots in the playoffs, it becomes even more so.

Khudobin has faced 677 shots against, with Lightning goalie Andrei Vasilevskiy facing the second most at 631. It’s little wonder why these two teams are battling it out for hockey’s ultimate prize, the Stanley Cup.

Then in Game 2, the Lightning were able to do what they simply couldn’t in Game 1, score more than once on Khudobin. So what worked in this game that failed to work in the first tilt?

First off, the Lightning had their legs back for this game. Head coach Jon Cooper made reference to the lack of effort in Game 1 by saying his team probably didn’t even need showers after the game. He was speaking mostly about the first 40 minutes of course.

The extra jump got the team more power-play opportunities with the Stars having trouble keeping up with the energized Lightning. Tampa was able to cash in on two of the three chances in the first period and rolled from there. They added a third goal to close out the period up 3-0.

The Lightning also made a concerted effort to make life difficult in the crease for the Dallas goalie.

Having guys crash the net to unsettle a locked in goalie is a time tested tactic used in hockey for decades and it worked again here. The traffic in front also worked to increase possible deflections, which goalies hate above all else. That’s exactly what happened on the first goal for Tampa. In all fairness it went off Stars defenseman Esa Lindell, but that wouldn’t have happened if he wasn’t there trying to move Alex Killorn from in front of the net.

Another thing the Lightning did in Game 2 was getting Khudobin to move more side to side with pinpoint cross-ice passing. On the second goal, Tampa was again on the power-play, but used completely different tactics this time to confuse the Dallas netminder.

Khudobin plays an aggressive style, akin to former Boston Bruins goalie Tim Thomas, often coming out further from goal to challenge the shooter. Tampa used this to their advantage going tic-tac-toe from Victor Hedman to Nikita Kucherov and then over to Ondrej Palat for the score. Khudobin had to move quickly from right to left then back to his right and simply couldn’t make it back fast enough.

The Lightning were also much stronger on the forecheck in Game 2. The third goal of the first period was caused by a Dallas turnover at their own blue line by rookie Joel Kiviranta. The Lightning pounced on the chance with Kevin Shattenkirk scoring on a seeing eye shot with traffic in front of Khudobin.

The 3-0 lead was enough to hold off the Stars late rally for a 3-2 Lightning victory evening the series and shifting the momentum back in Tampa’s favor. The Stars didn’t make it easy on them for sure, coming out strong in the second period testing Vasilevskiy early and often but the Lightning goalie was up to the task.

So the question is, can Game 2 be duplicated for the rest of the series? The answer is absolutely yes, it can. The great thing for the Lightning is that all the things that worked well in this game are repeatable the rest of the way as long as they come with the effort. Khudobin has been great, especially after the Stars series victory over the Colorado Avalanche in the second round but can be thrown off his game. Tonight’s game illustrated that fact in a very clear and obvious way to say the least.

Moving forward, Tampa will have to do all the things they did in Game 2 to avoid the pitfall that befell the Vegas Golden Knights in the last round against the Stars. Like the Lightning, Vegas also lost Game 1 with Khudobin stealing the show, only to come back and pepper the goalie for three goals for a 3-0 Game 2 victory. Vegas then seemed to forget what had worked so well in Game 2 and lost the series in five games. Let’s see if Tampa can avoid being struck by the same lightning that took out the Golden Knights.