Welcome to the beginning of our newest article series here on Back Sports Page! Untapped Potential will document some of the all-time great talents in sports before injuries halted them. These players often end their careers with fans questioning “what could have been?” Unfortunately, most of these athletes were never able to reach their full potential but their time on the field will always be remembered.

Johnny Knox played for the Chicago Bears from 2009-2011 and was electric during his tenure. Knox played with quarterback Jay Cutler all three seasons and his ability to be explosive made him one of Cutler’s favorite targets. 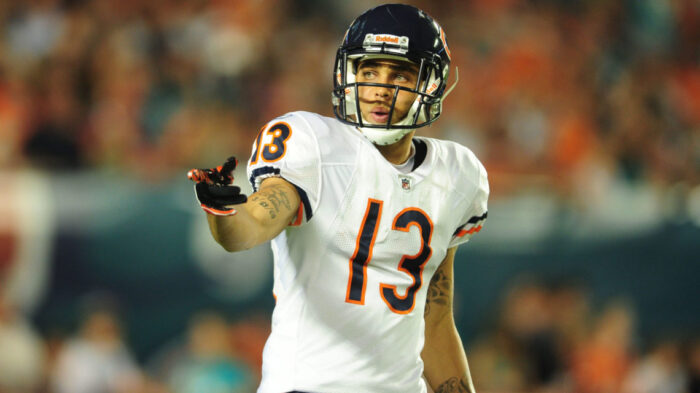 His rookie year Knox finished with 527 receiving yards and 5 touchdowns, fairly average for a rookie. That being said however, the Bears didn’t have a single receiver over 800 yards on the year.
Knox was able to make plays that the Bears offense hadn’t had for a long time.
His lone return touchdown of 2009 saw Knox run a kick back 102 yards to give the Bears the lead seconds into the 3rd quarter.
Knox showed off his speed and acceleration by simply outrunning most of the Lions kickoff team. The Bears had one of the best special teams units in the league at this time and Knox was certainly taking advantage of it. Plays like this were what led Johnny Knox to a Pro Bowl appearance as a returner his rookie year. Knox’s rookie performance helped set the stage for what would be a great year two for the former Abilene Christian prospect. Knox’s sophomore season with Chicago saw him lead the team in receiving yards by nearly 400 yards. He had 960 yards and 5 touchdowns and became one of Jay Cutler’s favorite receivers. Johnny also had 30 more targets than the next closest receiver. He became the main deep threat in a heavy running offense.
Knox helped lead the Bears to a 11-5 record which was good enough for a first round bye. Unfortunately for Knox, he wasn’t much a factor through the Bears divisional and NFC championship games. The Bears would lose 21-14 against Green Bay in the NFC Championship to finish out a great 2010 season. Knox has shown progression since his rookie year and with playoff experience now in his repertoire, Knox was poised for a big year three. The 2011 season saw Knox lead the Bears in receiving once again despite missing the final 2 games. Knox was the Bears biggest threat after Greg Olsen’s trade. In 2011, Knox was ranked second in the NFL in yards per reception at 19.6
The Bears were 7-3 before a Jay Cutler injury derailed their season. Cutler’s injury saw Knox’s production dip heavily. The Bears had three straight losses without gaining more than 100 passing yards. That final loss without 100 passing yards against the Seahawks would ultimately be the last game of Knox’s career.
Knox would suffer a severe spinal injury on a play where he was going for a fumble he lost. Johnny dove for the football and would unfortunately never play football again.

Where is Johnny Knox today?

Nowadays, Johnny Knox has 4 kids and spends his time traveling around the world with his family. Knox did dabble in coaching as an intern for the Lovie Smith coached bucs in 2015 and a high school coaching gig in 2018. Since then, Knox has been seen all around the world, most recently in countries like Spain, Italy, and Portugal.

Johnny Knox is a classic case of “what could have been?” He became one of the Bears most valuable assets and was poised for a long career with the Chicago Bears. Knox was never able to eclipse a 1,000 yard campaign, but he led his team in receiving two out of the three years he was on the roster. Not only that, but his playmaking ability downfield had him poised to become one of the greatest deep threats the sport had seen. While Johnny Knox didn’t get to play more than three seasons, his time will forever be remembered in Chicago and by Bears fans everywhere. How much potential do you believe Johnny Knox left untapped?