As the clock struck 4:00 P.M. EST on November 1st the Dallas Cowboys did not make any trades to improve the team. Cowboys fans have become accustomed to Jerry Jones not making any big trades on the day of the deadline.

The Cowboys did trade for Las Vegas Raiders DT Johnathan Hankins in exchange for a 2023-sixth-round draft pick and the return of a 2024 seventh-round pick on October 25th. 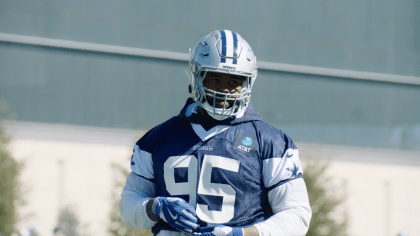 Although it was not a flashy trade that turned many heads, Hankins was a great pickup for the Cowboys.

The Dallas Cowboys also waived 2019 second-round pick DT Trysten Hill. The Cowboys tried to find a trade partner for Hill before the deadline but could not come to a deal with anyone. Hill recorded 36 tackles and a half-sack in 25 games as a Cowboy.

This is the burning question for Cowboys fans. Is the roster put together currently enough to win the Super Bowl? That is just something we’ll have to wait and see.

Teams around the NFL made moves at the trade deadline to improve their team and make a real push for the Super Bowl. For example, the Miami Dolphins went out and traded for DE Bradley Chubb from the Denver Broncos and RB Jeff Wilson from the San Francisco 49ers. Miami’s front office knows that they can compete for a Super Bowl with a few more pieces and they did just that. Even the undefeated Philadelphia Eagles improved by acquiring DE Robert Quinn, GM Howie Roseman wants to make that team the absolute best it can be.

The window for the Cowboys to win a Super Bowl is now. The NFC is wide open this year with only two teams above .500 outside of the NFC East. The overall consensus for the Cowboys is that they have all the pieces already to make a run at the Super Bowl.

Talks to Acquire a Wide Receiver

Reports came out that the Cowboys were in talks to trade for Houston Texans WB Brandin Cooks but could not come up with a deal by the 4:00 P.M deadline. This shows that the Cowboys were looking for more help at the receiver position but will now have to continue with their current receivers unless something unexpected happens (Odell Beckham Jr. signing?).

Cooks has recorded six 1,000-yard seasons in his eight-year career. This season he has 32 receptions for 354 yards and one touchdown. Making a trade for Cooks could have elevated this offense to return to the top of the league.

One issue with getting the deal done was Cooks’ current contract. The Texans’ number one receiver is set to make $18 million guaranteed in 2023 and that was the apparent deal breaker. Another instance where Jerry Jones and the Cowboys did not want to pay a receiver even though it could take this team to another level.

The talks about adding another playmaking receiver could have been laid to rest if the Cowboys did not trade away Amari Cooper during the offseason. Cooper’s five-year $100 million contract is what made the Cowboys trade away Cooper to the Cleveland Browns for only a fifth-round pick and a sixth-round pick swap. Cooper has 39 receptions for 553 yards and five touchdowns on the season in Cleveland.

It’s disappointing that the Cowboys did not make any moves at the deadline, but I cannot say I’m surprised. I do think this team is talented enough to win multiple playoff games, but I do think another receiver puts this team over the top. However, I’m hopeful that everything works out and that Jerry Jones made the right decision to not go out and reach for another player. So will this Cowboys team currently constructed be enough to win a Super Bowl?