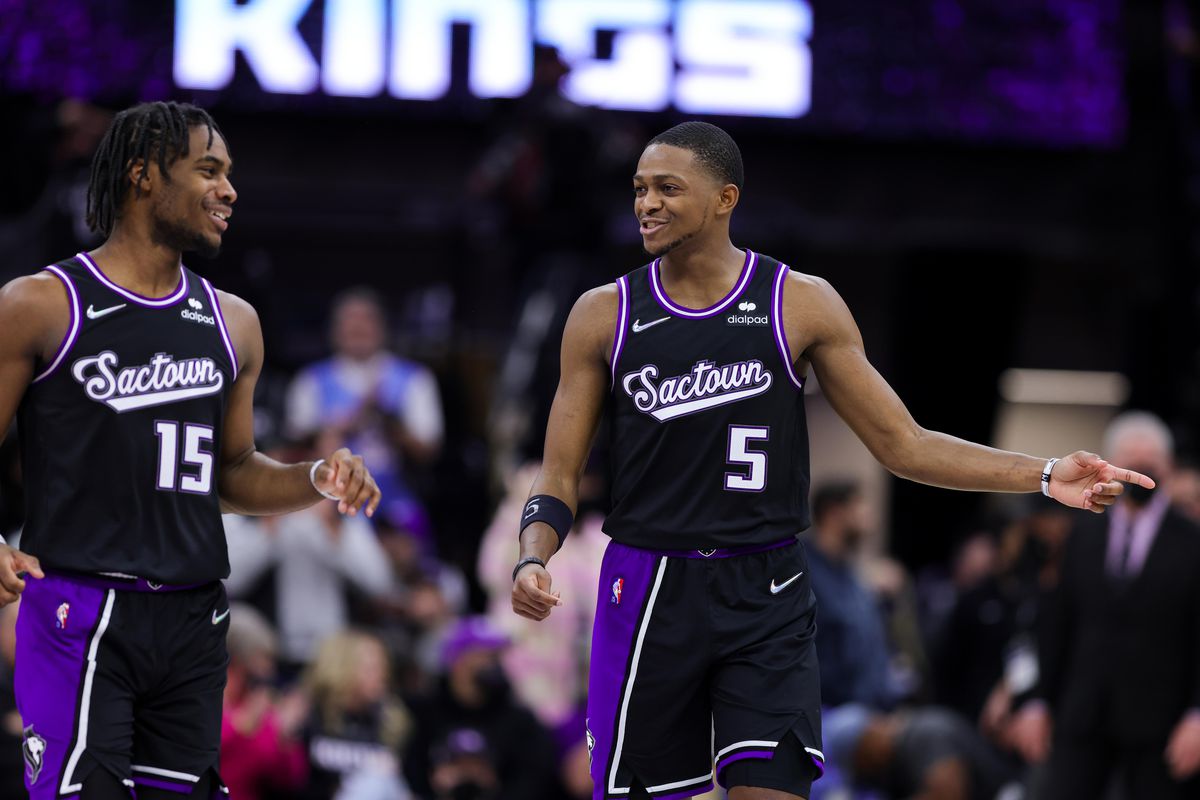 The Sacramento Kings made a head scratching deal midseason by sending twenty-two year old budding star Tyrese Haliburton to Indiana for borderline All-Star, Domantas Sabonis. Giving up a guy in Haliburton who looks like a future potential superstar for a guy who has probably peaked makes no sense to me, but hey, we’ll see what happens. Sabonis brings an inside-out big man presence which Sacramento has been lacking. His passing and versatility could potentially bode well with fourth overall pick, Keegan Murray, who looks poised and ready to take his shot at Rookie of the Year. De’Aaron Fox is still the face of the franchise, but there are questions about his efficiency and whether he is a true closing shot-maker. Without Haliburton, second year guard Davion Mitchell should get a chance to showcase his skills more this season. This combination of young talent is an experiment for sure, but could turn out well if mediocrity is what the Kings front office is searching for.

De’Aaron Fox is a fast, dynamic guard who can occasionally shoot the ball. Last season, he dipped below thirty percent from three for the second time in his career, which is concerning to say the least. Ideally, with more spacing and time, Fox’s shooting numbers will become more efficient. Mitchell is only six feet tall, three inches shorter than Fox. Playing both of these two in the backcourt is not ideal from a defensive perspective on paper, but both are pests who take pride in their ability on both sides of the ball. With that being said, Mitchell will most likely play most of his minutes at the one while Fox is off the floor. Veteran Matthew Dellavedova is also on the roster, but I don’t expect to hear his name this season.

The Kings picked up Kevin Huerter via trade this offseason. Huerter is a fringe elite shooter who can score in bunches. After mostly coming off of the bench in Atlanta, I expect him to start being that the Kings gave up a future first round pick to get him. If he doesn’t start, Huerter will play a significant sixth man role. Like I mentioned previously, Mitchell could start at the two, but it’s not ideal from a size perspective. A dark horse candidate to start at the two is recent signee Malik Monk. Monk had the best season of his career for the Lakers last season, averaging about fourteen a game on just under forty percent from three. Monk also took about six threes per game, which is encouraging after the loss of sharpshooter Buddy Hield in the Haliburton-Sabonis trade. It’s also worth noting that Monk shared a backcourt with De’Aaron Fox at Kentucky, and the two were pretty good together. Terence Davis hasn’t played thirty-five games in any of the last three seasons. If healthy, he could get some minutes at the two as well.

Harrison Barnes is one of the most underrated scorers in the NBA. Barnes is a 6’8” forward with guard skills. His shooting has been incredibly efficient, and he rebounds well too. Barnes fits perfectly into a starting lineup which desperately needs perimeter size. His scoring numbers may go down this season, but I expect him to be a bigger difference maker on defense for a change. Huerter is also very capable of playing the three, and could be subbed in for Barnes quite often. Keegan Murray’s scoring ability is enough to consider him a potential small forward as well. Sacramento will need better defense at this position. The Kings had the second highest opponent three point percentage last season, as well as the second highest opponent points per game. Hopefully for Kings fans, Barnes and Huerter will do a good job closing out on shooters.

Murray was able to snag Summer League MVP honors after a plethora of high scoring games. Murray rebounded at an elite level in college, and is a versatile defender who can arguably guard all five positions on the floor. How he will pair with Sabonis is yet to be seen, but the two don’t appear to have any glaringly clashing playstyles. Murray could blossom into a superstar. Chimezie Metu and Trey Lyles are less than adequate on the NBA starter scale, but they will most likely split bench minutes at the four. Richaun Holmes is more of a center, but his talent might be enough to warrant him playing more minutes at the power forward slot this season.

Sacramento has quite the log jam at the five. After the blockbuster deal last season, the Kings were left hanging on to a worthy starter in Holmes who now would not be able to start. Holmes provides a very solid backup option behind Sabonis if the Kings don’t move him before the season, which they very well could. Sabonis will undoubtedly eat up most of the minutes at center, and for good reason. The All-Star is a modern big who can stretch the floor and pass the ball at a high level for his size. His post game and touch around the basket is elite as well. My only concern is his defense. Sabonis looked disinterested at times last season on both of the teams he played for. I expect that to change if Sacramento competes for a Playoff spot. Alex Len is solid defensively and on the boards, and will also relieve Sabonis of center duties at times.

Can the Kings really be decent? From a talent perspective, the answer is yes. From a chemistry perspective, the Kings still have a few more questions which need to be answered. Will Murray be an elite scorer right away? Will Harrison Barnes regress with a lesser role this season? Will the Sabonis-Fox experiment truly work? New head coach Mike Brown will have his hands full as Sacramento tries to finally turn some talk into action. Last season the Kings were 30-52. I expect them to push forty wins this season as either the ninth or tenth team in a competitive Western Conference. I can see them making the Play-In Tournament and even potentially sneaking into the Playoffs. They will not win a series, though. The West is too tough and too experienced.