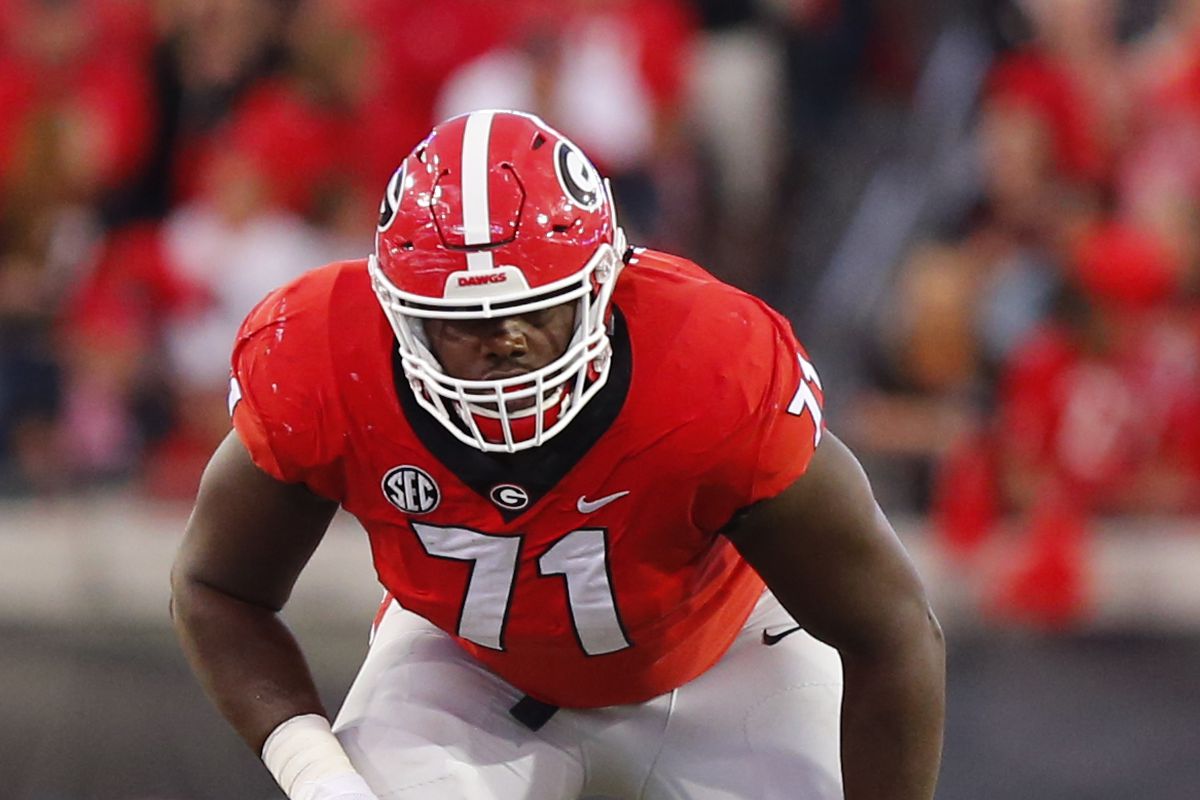 Dave Gettleman stated on his conference call that “We want to fix this offensive line once and for all.” Tonight was the first step as New York drafted Offensive tackle Andrew Thomas from Georgia.Immediate family, my agent, my mentor and a few of my close friends just to be here celebrating with me.

Thomas was selected as an All American in 2019 and was selected to SCC first team during the last two seasons as well as select to the freshmen All american team back in 2017.

Thomas has played against Josh Allen during his days in Georgia. Challenges like this made Thomas much more prepared to step into the pro game.

“I want to go up against the best guys and test my limits against them. Said Thomas during his Conference call with the media. “Going up against him (Allen) and having a pretty good game meant a lot to me. I put in a lot of hard work to get there.”

The Giants who have had offensive line issues since their last Super Bowl, now want to make sure Daniel Jones is protected going forward and are hoping Thomas can be a key to that protection.

“One thing that sticks out about him is when you watch the top pass rushers, with the exception of maybe a couple in this draft, they have to go against him” Said head Coach Joe Judge. “You watch his college tape and he is going against all the guys that you are going to see get drafted in the next couple of days. He does a heck of job on them, you see him compete, you see him play big in big games and that’s important. He was coached very hard at the University of Georgia and that’s a trait we look for. Guys who can play hard and play on big stages and compete”.

Both Gettleman and Judge both felt Thomas was the most ready offensive tackle in the draft and stated that they wanted Thomas as a cornerstone of the offensive line for the future. Judge was questioned about his ability to play on both sides of the line.

“The good thing about both of our tackles, really all of our tackles, they played on both sides” Said Judge. “If you look across the board, everyone on our depth chart right now has played on the right and the left. Everyone is going to come in on Day One and compete and as they shake out, whether that demonstrates being a starter at whatever position, that’s where they’ll fall. We went into this with several players we all thought had the ability to go on both sides, right or left. We made a decision that we’re going to let training camp figure that out. We’re not going to have a pre-conceived notion right now of trying to plug someone in. We have a lot of talented guys, they have to compete.”

According to both Gettleman and Judge, Thomas will have to earn his spot and nothing will be handed to him. ” I am going to say the same thing to him that I said to Saquon and that I said to Daniel, you have to come in and compete, nothing is getting handed to you. Said Gettleman during his conference call. “He’s big, he’s long, he’s strong, he can bend. He can anchor in pass (protection). He’s very athletic in the open field, we are just really excited to have him, and continue to build this team properly.

Thomas stated that he is grateful for the opportunity and has the confidence that he can come and make an impact for Big Blue. During his conference call with the media, Thomas discussed his work ethic and confidence.

“Confidence comes with preparation, understanding the playbook, learning from the vets week in and week out” Said Thomas. “Going against guys that have been playing in the league for 10 years, who are very good at what they do, so for me, it’s a mental thing and like I said, having confidence in myself for my preparation.”

During the call, Dave Gettleman addressed the rumors of possibly moving down in the draft order stating that there were some talks but nothing really to go crazy about.

“We had conversations, but everyone was touchy-feely, maybe yes, maybe no” Said Gettleman. “There were no firm offers anywhere. There is nothing that made me look at John Mara and Joe (Judge) and say let’s trade back and get some more picks. There really wasn’t much there. You can see we haven’t had a trade in the first round yet, how often does that happen? There wasn’t a lot of action.”

The Draft will continue on Friday Night with the Giants having the 36th pick in the second round and the 99th pick in the third round.