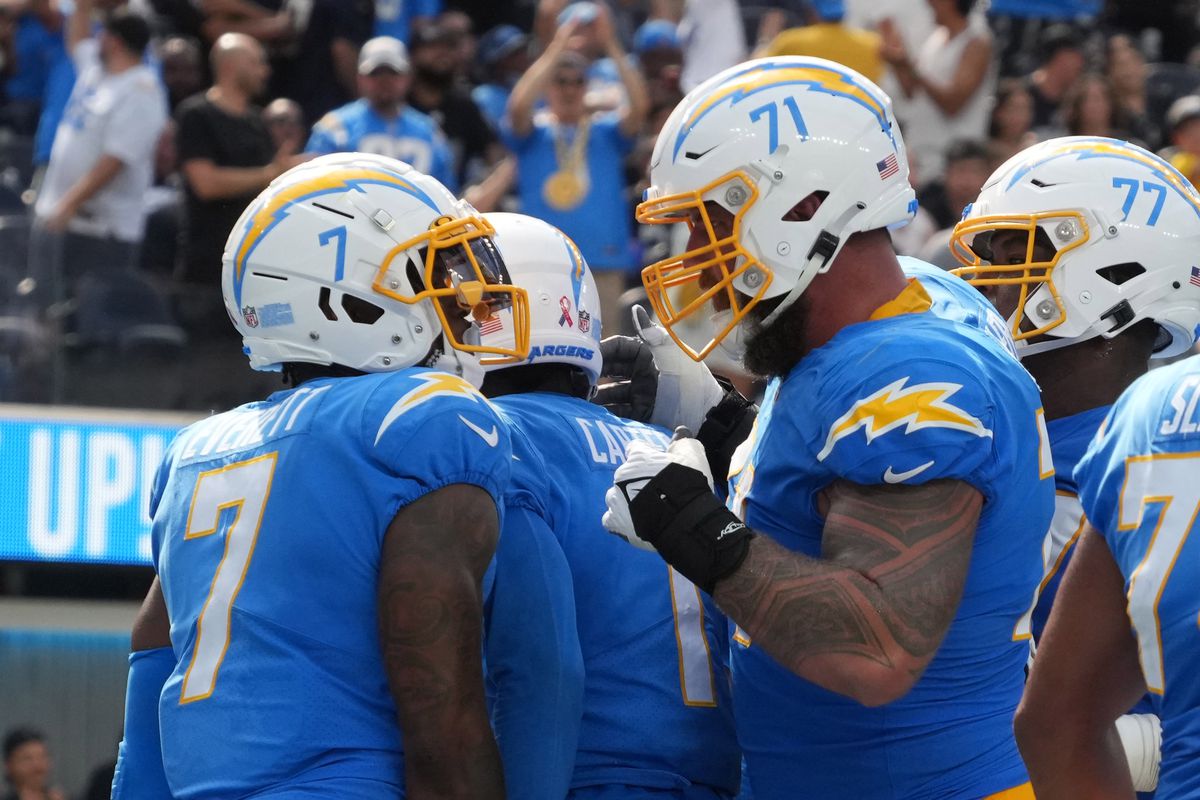 This week brings a quick turnaround for both of these Super Bowl hopefuls. Each team is coming in strong after wins week 1. This very well could be our preview of the AFC Championship game.

Despite struggling to contain Davante Adams in last Sunday’s matchup, the Chargers did a good job containing the Raiders’ offensive weapons. The Chargers also had good news coming out of warmups. J.C. Jackson could make his first appearance in the powder blue Thursday. Brandon Staley commented that Jackson’s chances to play are about “50-50” for Thursday. That is quicker than many expected, but after an outstanding performance by Patrick Mahomes, the Chargers are going to need everyone healthy, at the top of their game and focused on first downs, completions, clean scores, and blocking with hard and fast defense carrying the strength of their entire arsenal throughout every second of the game.

1. Defense needs to continue to thrive

The Chargers did a good job in holding Josh Jacobs Sunday. They need to be consistent and solid to improve against the run. Every ‘BOLT’ of their power needs to be put towards stopping Patrick Mahomes and the high powered Chiefs’ offense. Mahomes started week 1 with a five touchdown game against the Cardinals. Wins like that empower a team.

No small effort will stop Travis Kelce and JuJu Smith-Schuster. Developing a multiprong strategy to stop their productive play is a good place to start. Kelce ate up the Cardinals’ defense racking up 121 yards and a touchdown. The Chargers, after allowing Davante Adams to have a similar stat line in week 1, have the potential to see Kelce repeat that performance in week 2. The Chargers have to control the field limiting Kelce’s availability to Mahomes. They need to put the pressure on the Chiefs’ wide receivers. If they are able to do this effectively the Chiefs’ offense will need to another strategy. The Chargers’ defense has their work cut out for them. Get those men some heavy duty massage and stretch time.

Khalil Mack had an impressive first game. He will continue to bring pressure, make sacks and break up plays . With Mack’s success, Joey Bosa’s opportunities will grow as well. These two have the opportunity to become the Bash Brothers of football. They can become the most feared pass rush duo in the league. Their success against a Super Bowl contender will not only fuel the defense’s confidence, but it will show they have the ability to stop the best offenses in the NFL.

The run game struggled early, but it did eventually begin to find its legs late in Sunday’s game. The Chargers have to put Austin Ekeler and Joshua Kelley on task from the first minute of play. Step it up and Bolt up.

Successfully executing their run game is key, if the Chargers can optimize their play integrating their passing it would be a huge step forward in this development and coordination of the offense. Let’s not have this be a too little too late season. Being able to run at any time would open up the play action game which was emphasized during training camp this year. This versatility would definitely keep opponents on their toes, spread the defense out when needed, and condense it so that deep ball plays are successful.

In week 1, the Chargers offensive line did a great job in keeping pressure off their young quarterback. Hebert had time to make decisions and looked very comfortable in the pocket. As the season progresses, the Chargers will face better pass rushers. It is paramount they build up the confidence and chemistry to handle the increase in pressure. Strength, balance and reflex. Use the VR, run drills until your line can block a line of 2 year old cattle. Run through every scenario until it is a reflex reaction and you don’t think it just happens. You are stronger, quicker to react and have more stamina than your opponent.

If the Chargers are able to successfully do these things they should have no problem going into Kansas City and taking care of business. Things rarely go as planned. That is when this team needs to focus, stay calm and keep doing what works. Don’t take unnecessary risks. Don’t give up on the process or game plan. I foresee the Chargers following their established plan and getting the job done in Kansas City.