Cowboys Dominate Bucs: Look Ahead to the 49ers 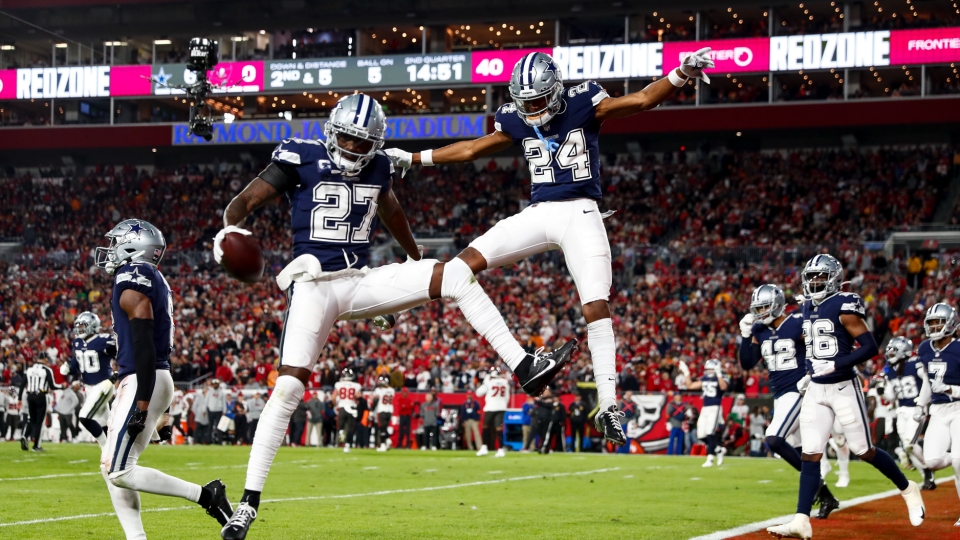 On Monday night the Cowboys won their first playoff game since the 2018-19 season when they defeated the Seattle Seahawks at home.

The Cowboys came out on top in the 31-14 where they were able to dominate for the majority of the game against the Buccaneers. Dak Prescott also may have played the best game of his career while the Dallas defense put a stop to the G.O.A.T Tom Brady (who was 7-0 against the Cowboys before Monday’s game). Prescott also broke his seven-game streak for throwing an interception.

After a dismal start to the game with two three-and-outs the Cowboys were able to put together a seven-play 80-yard touchdown drive where Prescott threw his first of four touchdowns (accounted for all five touchdowns).

That drive was the start of Dak calming down and getting comfortable. And from there on out, Prescott impressed everyone watching with 25 completions for 305 yards and four touchdowns in the air. On the ground, he rushed for 24 yards and a touchdown.

The offense looked like a well-oiled machine throughout the game and it will certainly give the offense confidence going into San Francisco this week.

On defense, Dallas shut down the Bucs’ offense for the majority of the game. They allowed only 52 rushing yards along with 12 pass deflections and two sacks. As I stated in my last article, Micah Parsons needed to show up for the Cowboys to win. And that is exactly what happened. Parsons recorded two tackles for loss, two QB hits, two pass deflections, and one sack. Overall dominant performance from the two-time All-Pro.

One obvious problem from Monday night was kicker Brett Maher, who missed four out of five extra points. Maher went 29-32 on field goals in the regular season so he is a trustworthy kicker. However, the Cowboys signed K Tristan Vizcaino to the practice squad today if Maher struggles in practice this week.

The Cowboys will look to ride the momentum of this commanding win into the Divisional Round.

For the second year in a row, the Cowboys will face the 49ers in the playoffs. Last season San Francisco came into AT&T stadium and upset Dallas. The game ended with some questionable clock management from the Cowboys to close out the 23-17 loss.

This year the Cowboys and their fans are expecting different results. With a playoff win under their belt already it may calm the Cowboys’ nerves going into this game. It will also be a revenge-type game.

For the 49ers, they have not lost a game since October 23 when the Kansas City Chiefs won controlling 44-23. This season has been eventful, to say the least for San Francisco.

Then comes rookie Brock Purdy. Mr. Irrelevant (last pick in the NFL Draft) has played exceptionally under HC Kyle Shanahan’s offensive scheme. He has gone 6-0 as the starter and is simply leading the 49ers to win after win.

Last week in the Wild Card round, Purdy threw for 332 yards and three touchdowns, and no turnovers in the 41-23 win over the Seattle Seahawks. This will certainly be the Dallas Cowboys’ toughest test of the season.

Limit Big Plays: The 49ers rank eighth in the NFL with 25+ yards pass plays with 33 during the regular season. They simply have playmakers at every position on the field. RB Christian McCaffrey is one of the best playmakers in the NFL along with WR Deebo Samuel who is versatile in both the run game and pass game. At TE George Kittle is considered a top-three tight end year in and year out. Their playmakers are a huge reason why Purdy is striving in this offense.

The Cowboys must limit plays that will get their playmakers going. There will need to be loads of film to study throughout this week to stop one of the best offenses in football. They have yet to seriously be stopped throughout the second half of the season, if the Cowboys can be the first to do so, good things will happen.

Keep the Offense Rolling: OC Kellen Moore may have had one of his best games play calling-wise against Tampa Bay. The Bucs’ defense simply did not have an answer for the Cowboys after their first touchdown. If Dak Prescott can play like he did last game, then this is a Super Bowl-caliber offense.

The running game was led by Tony Pollard who was explosive all night while rushing for 77 yards on 15 carries. Dalton Schultz was Dak’s #1 target on Monday and recorded seven receptions for 95 yards and two touchdowns. CeeDee Lamb and Michael Gallup each scored a touchdown and contributed immensely to Dallas’ success. They will all need another great outing to compete against the 49ers’ powerful defense.

Disrupt Brock Purdy: Personally, I think this could be the most important key to moving to the NFC Championship. If the Cowboys can hit Purdy and cause him to turn the ball over, this game could slip away from the 49ers. The Cowboys defense had Tom Brady making bad decisions and not looking like himself all game long so if they can do the same to Purdy the game will be in their favor.

Last week I predicted a Cowboys 31-17 victory which was almost spot on. And once again this week I’m confident that the Cowboys go onto their first championship game since 1995 which led to their last Super Bowl win.

I do think this will be a competitive game throughout but after watching how the Cowboys dominated the Bucs, they should be able to bring that momentum. The locker room should also have that sense that this team can win the Super Bowl. There is enough talent on this roster to bring a sixth Lombardi Trophy back to Dallas.

It should be another entertaining game this Sunday night in San Francisco.