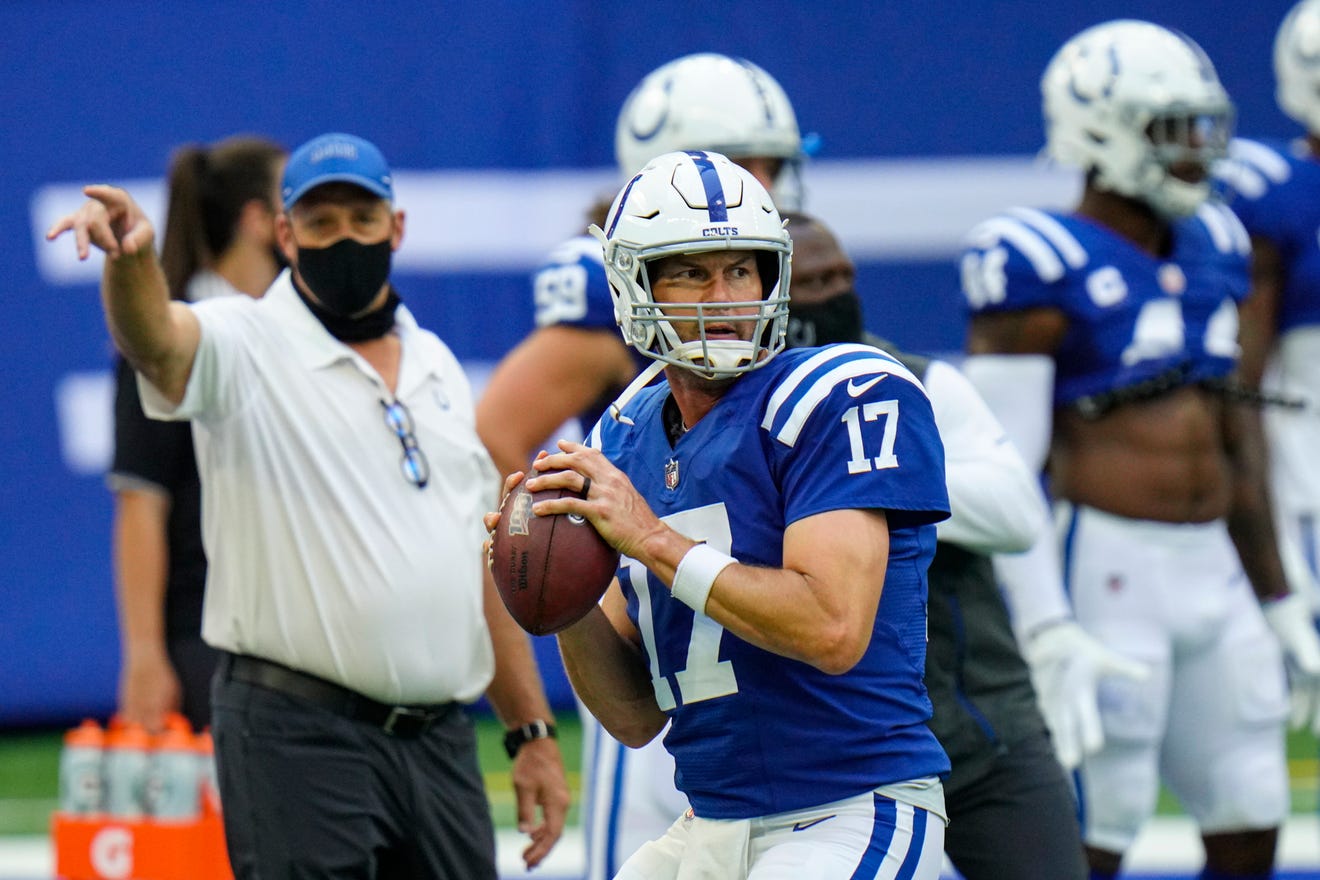 After spending the first 16 years of his career as a San Diego Charger, QB Phillip Rivers moved under center for the Indianapolis Colts in 2020. The 39-year-old veteran showed he still had some gas left in the tank, leading Indianapolis to an 11-5 record and a playoff appearance. Rivers had a renaissance of sorts in head coach Frank Reich’s offense, focusing in more on short passes and netting 4,169 passing yards and 24 touchdowns to 11 interceptions. Those stats certainly warrant giving the QB another shot after his one year $25 million contract expired, but age may be the most important number in this equation. Following the team’s Wild Card Weekend loss to the Buffalo Bills, Colts GM Chris Ballard told reporters that Rivers was not 100% sure he wanted to continue playing.

While Rivers calling it a career would certainly lack the shock value of Colts QB Andrew Luck’s surprise retirement before the 2019 season, the result would be the same: a playoff caliber team left with a gaping hole at the most important position in the game, if not all of sports. What’s worse, this time around Indianapolis may be without safety valve backup QB Jacoby Brissett, who is set to enter free agency alongside Rivers. Ballard and the Colts have indicated that they would like to have Rivers back in Indianapolis next season, but they’ll need to explore some alternatives as the two parties think it over for the next month or so. If Rivers does end up retiring or (perhaps less likely) taking a deal elsewhere, who might we see at QB for the Colts in 2021?

There’s a lot of reasons why Wentz could make sense for Indianapolis. For starters, his career best 2017 pro bowl season came under a Philadelphia Eagles offense still directed by none other than Reich himself. Wentz’s numbers have dipped considerably in the time since, resulting in him being benched in favor of Jalen Hurts down the stretch this season. While these struggles have certainly dampened the future outlook for this once promising young star, one can’t help but wonder if an environment change, especially one reuniting him with a coach who helped him shine at his brightest, could help spark a turnaround for the embattled Eagles QB.

Wentz’s fall from grace and his subsequent benching appeared fracture his relationship with now former Eagles head coach Doug Pederson, but it’s possible that the team’s next coach may wish to give the second overall pick in the 2016 draft another shot. Or perhaps a new coach may want to hand pick their own QB to fit their desired system. If the Eagles do move on from Wentz, the primary roadblock will be the 4 years and $128 million remaining on his megadeal contract. Indianapolis, or any team for that matter, would likely want the Eagles to eat at least a portion of that salary in return for taking on a player that is clearly no longer worth that kind of money. The good news for the Colts is that they could, in theory, offer less in terms of draft capital or established talent in return for taking on a larger chunk of that contract. Ballard has been notably careful in spending since taking the reins for Indianapolis, resulting in the third most cap space in the league. Could taking a shot on a potential QB of the future be the move he’s been waiting for or would Ballard prefer a less risky investment?

Coming off a largely unsuccessful one year $1.75 million experiment with the New England Patriots, Newton would certainly come at a much lower cost than Wentz. While the 31-year-old QB may lack the benefit of past success with Reich, he does have clear upside, as evidenced by his 2015 MVP season in which he threw 35 touchdowns and ran for another 10. Like Wentz, Newton has since struggled to replicate this production in the years following what looks more and more like an outlier season. A string of injuries including a rotator cuff tear, a knee strain and a pedal Lisfranc sprain (serious foot injury) have kept Newton off the field and hampered his production when he has been available to play. Could the Colts’ stellar offensive line help to better protect Newton and propel him to a return to his former glory?

The other issue for Newton has been a lack of consistent downfield targets to throw to. While the ride receiver position isn’t necessarily a strength for Indianapolis, most would argue that the combination of TY Hilton, Michael Pittman Jr., Zach Pascal, Parris Campbell, Jack Doyle, Trey Burton and Mo Allie Cox is a stronger group than Newton had last year in New England and the years prior with the Carolina Panthers. Not to mention, the Colts’ strong run game behind Jonathon Taylor would alleviate some pressure for Newtown and the air attack. It’s also entertaining to imagine the possibilities for creativity that Reich could capitalize on with Newton and his versatile skillset. He may not be the QB of the future but at a likely low cost, it may be worth it to take a chance at finding out.

The Tampa Bay Buccaneers moved on from the turnover prone Winston in order to clear the way for legendary QB Tom Brady to run the show. The first pick in the 2015 draft then went on to sign a one year $1.1 million deal with the New Orleans Saints to back up Drew Brees and apparently Taysom Hill too. Winston actually profiles similarly to Rivers in that he plays with a gunslinger mentality, putting up lofty stat totals through a high-volume passing attack. Unfortunately, interceptions have also been another huge number Winston typically puts up, throwing a league high 30 in his last year as a starter.

Perhaps Winston could follow in Rivers’ footsteps to take better care of the ball in a Colts offense that emphasizes the short passing game. Mixing in more easy throws could work well to complement Winston’s big arm and playmaking ability. With Winston under center, Reich and the Colts could lull opposing defenses to sleep with the run game and short passes before allowing the former Heisman winner to open it up over the top with surprise bombs downfield. Much like Newton, signing Winston would be far from a sure thing, but there’s no doubt that there’s still upside in that arm. He too would come with the benefit of being a low-cost investment. After working as a backup in 2020, Winston may want a chance to start again, and the Colts could offer him a chance to do just that with a strong supporting cast around him.

Jones likely saw his draft stock rise with 9 touchdown passes, 0 interceptions and 761 passing yards in the University of Alabama’s championship winning playoff run. Even before his impressive showing in the College Football Playoff, Jones looked like a lock for the first round of the NFL draft with 41 touchdown passes, 4,500 passing yards and only four interceptions in his undefeated Junior season. Jones only started for one full year at Alabama after backing up Tua Tagovailoa but that was more than enough to show his potential as a pro style QB.

With the 21st pick in the draft, The Colts may well be within range to select Jones but trading up in the draft could help to seal the deal. Indianapolis may elect to use their first-round pick to bolster the secondary instead, but if Jones is available it may be hard to pass on his potential. Even if Rivers does elect to return to play in 2021, it may still be a good idea for the Colts to go ahead and start looking ahead to their future at the position.

Similar to Jones, Trask also didn’t become a starter at the college level until his Junior season. He does however have an additional year of experiencing after sticking around to start for his Florida Gators as a senior in 2020. At 6’5 239 pounds, Trask is stoutly built and very much looks the part of an NFL QB. His stats concur, with 43 touchdowns, 4,283 passing yards and nine interceptions this season. Trask is also a remarkably accurate passer, with a 67.9% career completion percentage at Florida.

Trask and Jones are each talented young arms in their own right, but it’s possible that the additional exposure of a title run may push the price up higher on Jones. This may come to the benefit of Indianapolis if they’re able to sit back and instead select Trask with a second-round draft pick. The Colts may even elect to draft Trask or Jones and have them learn and develop for a year under a short-term free agent addition like Newton or Winston. Running the show as a rookie is difficult, so it may not be surprising to see Indianapolis attempt to hedge their bets, but if there are rookie QBs you could trust to come in and win right away, Trask and Jones certainly do appear to be among them.

Whoever does end up playing QB for the Colts in 2021, they will enjoy a talented young roster surrounding them. If there is as vacancy at the position, Reich, Ballard and the Colts should have no shortage of interested options to run the show for their offense and attempt to build upon this year’s playoff appearance.