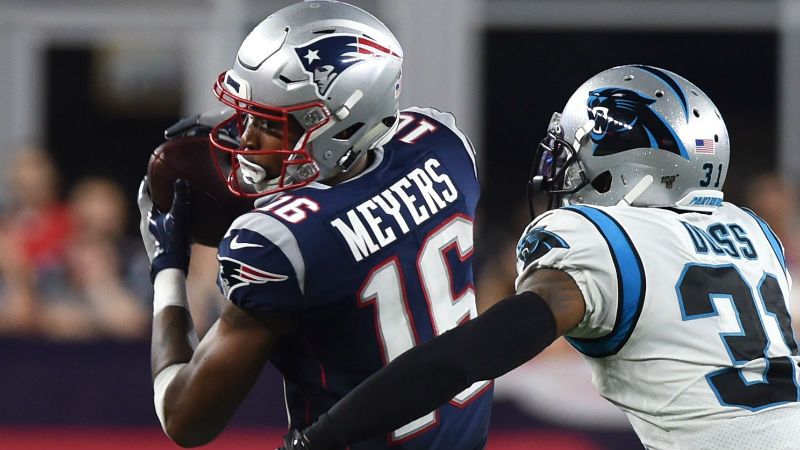 Prior to the start of the 1999 NFL season, Kurt Warner was just about ready to give up on his NFL career. He’d been underestimated time and time again, never really given a chance, and was bagging groceries for extra money while playing for the AFL. Then Trent Green tore his ACL in preseason, St. Louis Rams head coach Dick Vermeil named Warner his replacement starter, and the rest is history. Warner broke numerous records in leading the Rams to the Super Bowl and was named Super Bowl MVP.

The underdog story is not a new concept, yet it is always heartwarming and most of the time, relatable. Typically, the underdog is the person who is down and out, struggling, then by some miracle, things turn around and they become a star. It could be the person who was picked last in gym class, then turned out to be the best player on the team. Jakobi Meyers, rookie wide receiver for the New England Patriots, is the latter.

Meyers entered into the 2019 NFL draft out of North Carolina State, but found himself undrafted at the end of it all. Things quickly turned around for Meyers when he signed with the Patriots as an undrafted free agent.

Meyers was facing a lot of competition in the weeks before pre-season. Without the knowledge that Josh Gordon would be reinstated, the Patriots had Meyers, Phillip Dorsett, Maurice Harris and Braxton Berrios all competing for a spot on the 53-man roster. With rookie N’Keal Harry as an almost definitive starter, next to Julian Edelman and the freshly reinstated Gordon, Meyers had to stand out above the rest to prove his worth.

In the team’s Week One win over the Detroit Lions, Meyers reeled in six of his eight targets for two touchdowns and 69 yards. During training camp leading up to this game, the rookie mixed in well with the first team and didn’t seem out of his comfort zone. Going into the second preseason game of the year, Meyers brought in all six of his targets for a total of 82 yards and a successful two-point conversion to help bring the team a 22-17 victory over the Tennessee Titans. Last week, during Game Three of the preseason, Meyers did not shine as much as he did in the previous two games, though he did have a solid game overall.

With the preseason coming to a close this week, and the regular season being a week away from Sunday, the team will be looking to make their cuts. With how Meyers has progressed throughout training camp and the preseason this far, it would be no surprise if he is to find himself on the final roster going into the regular season. With Demaryius Thomas still recovering from an Achilles injury, Meyers may even see some utilization in week one. He has certainly proven that he belongs on the roster as New England looks to return to the Super Bowl.