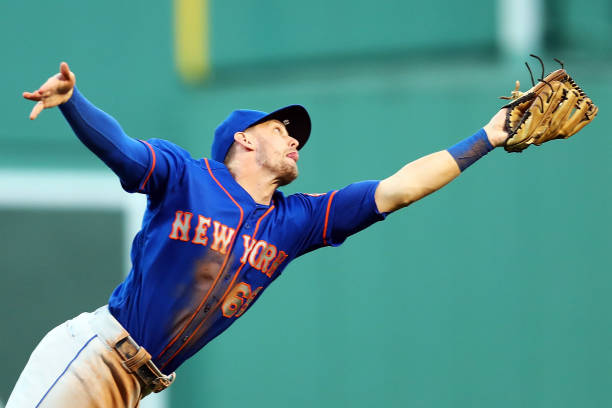 Note: If unsure about any stats used in this article, please check the key.

Unfortunately for the Mets, deGrom was not able to single-handedly carry them to the postseason. The team from Queens finished fourth in the NL East with a record of 77-85. After an incredible, 11-1 record start, the Mets went 10-18 in May, and 5-21 in June. Those two months alone were the difference in not making the playoffs for the third time in the last four years. The Mets received little aid from their star player, Yoenis Cespedes. Cespedes, who carried the Mets to the postseason from 2015-16, looked like a truly injury-prone player. In 2017, he was derailed from several hamstring strains, while in 2018 his year came to an abrupt end from Twin Heel Calcification. The Mets had another head-scratching injury when Noah Syndergaard was placed on the D.L. (now called the I.L.) with hand, foot, and mouth disease. Furthermore, Todd Frazier, who they signed to a 2/$17m deal struggled for the Mets. His OPS (.752 to .698), ISO (.212 to .176), BB% (14.4 to 10.2), and fWAR (3.1 to 1.5) all took a turn for the worst.

Other key acquisitions include Jed Lowrie, Marcus Stroman, Wilson Ramos, and J.D. Davis right before the trade deadline. Lowrie’s signing was surprising because the Mets already had Canó as a second baseman, and McNeil right behind him. Interestingly enough, McNeil was the healthiest and most productive of the three (.324/.392/.526, 18 HRs, .202 ISO, 3.9 fWAR), while mostly playing RF for New York. Also, acquiring Marcus Stroman shocked the baseball world as many baseball fans thought the Mets would sell Syndergaard, Wheeler, and/or Vargas (who they eventually did trade to the Phillies). Instead, they traded for one of the best pitchers in the American League in Marcus Stroman (124.1 IP, 2.89 ERA, 1.23 WHIP) to keep their playoff hopes alive. Surprisingly, the best acquisition of the quartet is J.D. Davis. Davis, who originally came from the Houston Astros’ system, was blocked by Alex Bregman, Michael Brantley, and lower than top prospect Kyle Tucker on the depth chart. As a result, Davis had no real opportunity with the Astros, so the Mets gladly scooped him up. In short, Davis has raked for the Mets (.307/.371/.519, 18 HRs, .212 ISO, and 2.1 fWAR). Although in terms of offensive performance, Ramos is not too far behind Davis; he’s still one of the best hitting catchers in the Majors (.298//.360/.434, 14 HRs, 111 wRC+, 1.5 fWAR).

Besides the major signings, the Mets brought in a wide variety of veterans, hoping that one would stick. The Mets signed brand named players such as Rajai Davis, Joe Panik, Adeiny Hechavarria, Matt Kemp, and Keon Broxton. These players have their fair share of hardware: Hechavarria and Panik won gold gloves, Broxton and Davis had 30+ steal seasons, and Kemp was second in MVP in 2011 In fact, the one veteran they did release was Travis d’Arnaud. d’Arnaud had a tough time throwing out runners (22.5 CS%), and a slightly below league offensive bat (career 97 wRC+) in his career, broke out when the Rays acquired him. In 80 games, he has 16 HRs (47 HRs in his career before then), 59 RBIs, and about a 1.6 fWAR. So, while Van Wagenen should be applauded for his efforts on taking a flyer on former All-Star players, none of these veteran acquisitions (or releases) have helped out the Mets.

Despite the Mets having a starting rotation that’s better than a good portion of National League contenders (Milwaukee Brewers, Chicago Cubs, Atlanta Braves, Philadelphia Phillies, St. Louis Cardinals and Arizona Diamondbacks), the Mets still trail behind the Los Angeles Dodgers and Washington Nationals in starting pitching. The Dodgers and Nationals have three pitchers a piece that are probable top-ten Cy Young candidates. The Dodgers have Hyun-Jin Ryu, Clayton Kershaw, and Walker Buehler, whereas the Nationals have Max Scherzer, Stephen Strasburg, and Patrick Corbin. That being said, the Mets have a top-10 Cy Young award candidate in deGrom, but Syndergaard and Wheeler will not fall into that category this season; Although Syndergaard Wheeler, and even Stroman (if he can find his groove again) do have the ceiling of an ace, they are not on par with these rotations. If the Mets made the playoffs and won the Wild Card game, can their rotation and their bullpen handle the Dodgers’ bats? Or even if the Mets made the World Series, could they withstand slugging AL contenders such as the New York Yankees, Minnesota Twins, Houston Astros, Oakland Athletics, or Cleveland Indians? It’s unlikely, to say the least.

To add insult to injury, the Mets offense is certainly top-heavy as McNeil, Alonso, Conforto, Davis, and Ramos are a fearsome quintet. However, Frazier, Canó, and Rosario are essentially league average hitters this year. Perhaps Lowrie’s return, or Joe Panik’s glove and contact skills can push Canó to the bench, but it’s unlikely that either would be that much of an upgrade. Another area of concern is the Mets’ defense. All across the diamond, the Mets struggle. McNeil is the only Met to play this year with a positive DRS or UZR. Although J.D. Davis (OF: -6 DRS, -8.4 UZR/150. 3B: -10 DRS, -5.3 UZR/150), and Wilson Ramos (-12 DRS, -7.9 FRM) are among the worst of the defenders, Conforto, Canó, Lagares, Alonso and Nimmo all are right behind them. At least, Alonso and Lagares pass the eye test in terms of their defensive abilities. It also doesn’t help that the Mets are awful with runners on base. They rank dead last in CS% (14.39%) with starters and relievers combined, third to last in CS% (15.91%) when their starters are pitching, and dead last with their relievers pitching (11.90 CS%).

Yet perhaps the most alarming issue is that the Mets are four games back of the second Wild Card with twenty games left to play. Currently, the Mets trail the Chicago Cubs, Arizona Diamondbacks, Milwaukee Brewers, and Phillies for the second Wild Card. The Mets will probably have to win at least fifteen of those games to have a decent chance at the Wild Card, and that’s only if the other Wild Card hopefuls don’t go on a hot streak. The rest of September will be a tough stretch for the Mets, yet they went on a tear to even put themselves in conversation about playoff contention, so it’s not too much of a stretch to make one final push.

fWAR: Wins Above Replacement from Fangraphs. For example, If a player has 0.1 fWAR they are worth 0.1 wins more than a replacement-level player (0.0 fWAR). During the halfway mark of a season, a starting player with 2.0 fWAR is an average starter.

Cy Young: The award for the best pitcher. There is a Cy Young award in the AL and NL.

1-5 starter: A starting rotation generally consists of five pitchers to go deep into ball games. 1 is the best starter, and 5 is the worst starter.

CS%: Caught Stealing percentage; The percentage at which runners are thrown out trying to steal a base. MLB average: 26.32%