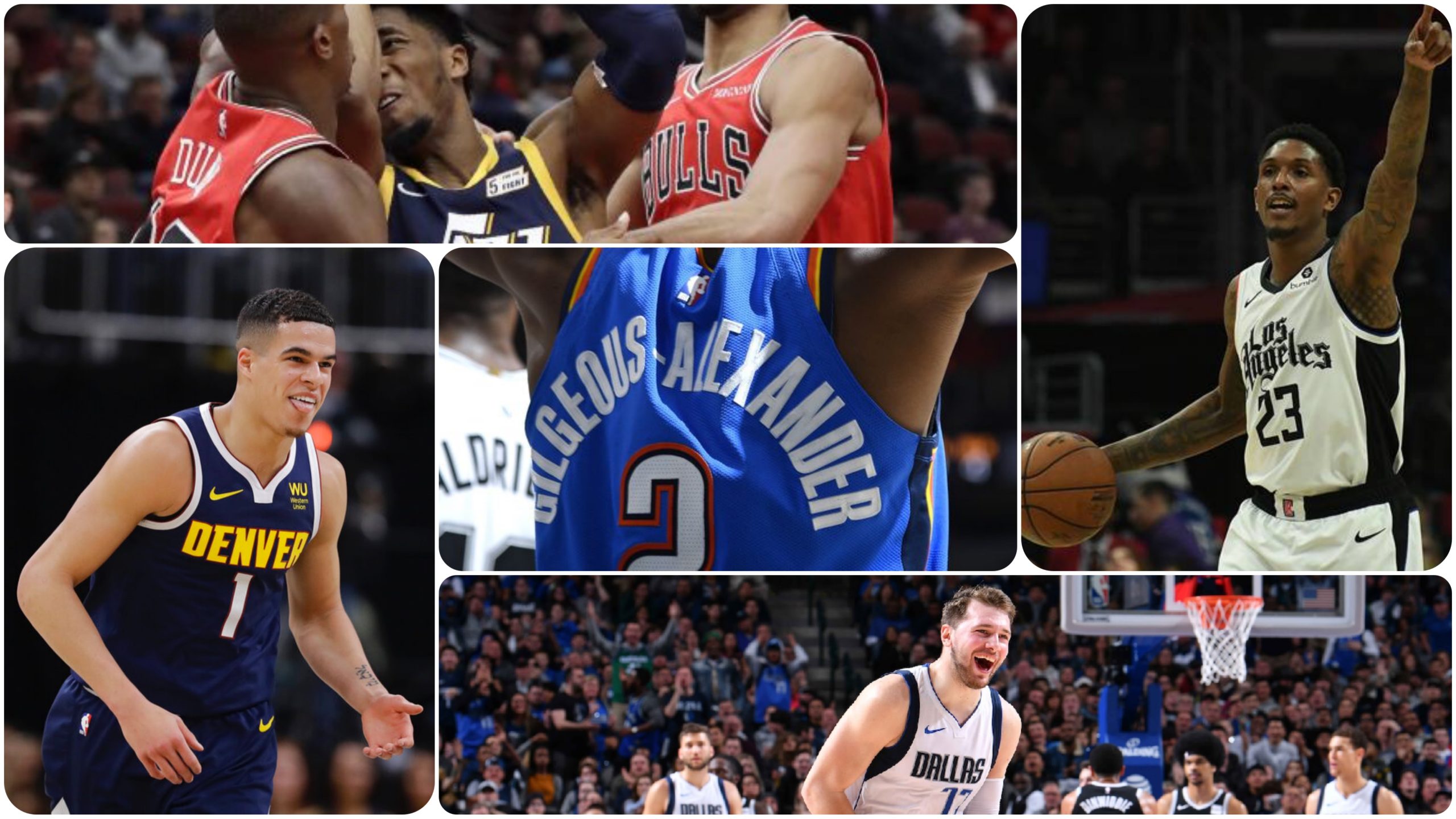 The Oklahoma City guard corps does it again, Michael Porter Jr. emerges, the Jazz stifle the Bulls, L.A.'s bench stalls the Pistons, Luka Doncic cuts down the Nets, and what a lineup the Golden State Warriors would have if they could snare the KAT.

What would a lineup possibly look like in Golden State as they tip off the 2020-21 season later this year?

With a healthy Stephen Curry, healthy Klay Thompson, a possibly draftee in LaMelo Ball, Draymond Green, and Karl-Anthony Towns, you’d almost have to pencil the Golden State Warriors back in for another championship consideration, if not certainty. Hell, use a Sharpie instead of a pencil.

Though Anthony Davis is living his best life in L.A., he still has a lingering desire to play in Chicago. But even if he stayed, with the Warriors’ fluidity in offense and everyone healthy, Towns might end up being the better Wildcat when all is said and done. Plus, Davis and LeBron James will be another year older.

Let the Lakers get theirs this year, then bring it back to the Bay.

Of course, this is conjecture, maybe even fantasy, at this point. But …

Despite shooting 50 percent to the Charlotte Hornets’ 44, despite outrebounding the Hornets, and despite having more assists, more blocks and more steals, the Cleveland Cavaliers found a way to lose last night’s game at Rocket Mortgage Fieldhouse. The formula was 14 turnovers and giving their guests 10 more trips to the free throw line with their 22 personal fouls. Someone do a welfare check on John Beilein, please.

NEXT GAMES
Thunder at Cavaliers – Saturday
Hornets at Mavericks – Saturday

The Indiana Pacers had the Denver Nuggets where they wanted them going into the half, up two, and a competitive game. Then it became The Silence of the Lamb, as the Denver defense squoze Jeremy Lamb and the Pacers in the second half, 62-52, with a defensive effort that start with a 35-27 second quarter that set the tone for the rest of the game. Michael Porter, Jr. didn’t start last night, but was the Nuggets’ team leader nonetheless, dropping 25 while Nikola Jokic and Jamal Murray kicked in 22 apiece for the team’s 24th win of the season.

There have been a couple of real lackluster games in the NBA this season, and the Toronto Raptors have been a part of both of them, and each time, they’ve lost. The first was the Raptors’ visit to Kawhi Leonard’s Los Angeles Clippers, which was a cure for insomnia back on November 11th, 98-88. Last night in Miami was worse as the teams combined for 160 points and Serge Ibaka was the high scorer with 19 points. Miami put just enough together to eke out an eight point win.

NEXT GAMES
Heat at Magic – Tonight
Raptors at Nets – Saturday

If you thought the Toronto Raptors-Miami Heat game was long and arduous, the Utah Jazz-Chicago Bulls wasn’t far behind. The Jazz had five players in double figures to Chicago’s three, and used a 29-19 third quarter as a catalyst for moving past the Bulls for the four point win.

NEXT GAMES
Jazz at Magic – Saturday
Celtics at Bulls – Saturday

Going for the hat trick on a slate of insomnia cure games, the Minnesota Timberwolves protected home court last night from the threat of the Golden State Warriors, who showed up in one of their most lackluster games this season, injuries aside. The effort just wasn’t there for a Warriors team that had handled these same Timberwolves, 113-104, a couple days before Christmas as part of their four game win streak over the holidays.

NEXT GAMES
Pistons at Warriors – Saturday
Timberwolves at Cavaliers – Sunday

The Brooklyn Nets had seven players in double digit scoring last night against the host Dallas Mavericks. Of course, none of that means much when your seven are outscored 94-87 by Dallas’ top five double digit scorers, and one of those is Luka Doncic, who missed his 10th triple double of the season by three dimes, but dropped 15 points in the fourth quarter. The Mavericks’ win helped them avoid a three game losing streak. Kristaps Porzingis (sore right knee) did not play, but then again, neither did Kyrie Irving. Again. But Caris LeVert may return as soon as Saturday.

NEXT GAMES
Raptors at Nets – Saturday
Hornets at Mavericks – Saturday

They’ve done it again … and on the road, in one of the most pristine environments in the NBA. The guard corps from the Oklahoma City Thunder continues to defy odds, completing the Texas Two Step with style – defeating the Dallas Mavericks at Oklahoma City on New Years Eve and then traveling to the hallowed hardwood of the AT&T Center and stuffing the San Antonio Spurs, who remain four and a half game behind the Thunder in the Western Conference.

The Memphis Grizzlies went on the road and roared out to a commanding 42-26 first quarter lead. The Kings responded with a 37-18 second quarter to take a three point lead into the locker room at the half, then pounded the Grizzlies again in the fourth, 38-26, to salt away the win. At the end of the night, both teams were at 13-22, neck and neck for the title of King of the Western Conference Basement Club. Dilly Dilly.

NEXT GAMES
Grizzlies at Clippers – Saturday
Pelicans at Kings – Saturday

The Los Angeles Clippers led 69-63 at the half, but caught the right wind in the third quarter, outscoring the sputtering Detroit Pistons, 37-16. To sail away with the easy 14 point win last night in L.A. The Clippers’ bench came in and scored 68 points, while Detroit had nine players in double digits to no avail. Montrezl Harrell and Lou Williams combined for 45 off the bench to give Kawhi Leonard and Paul George a night of semi-load management. The duo only had to put up 30 together.