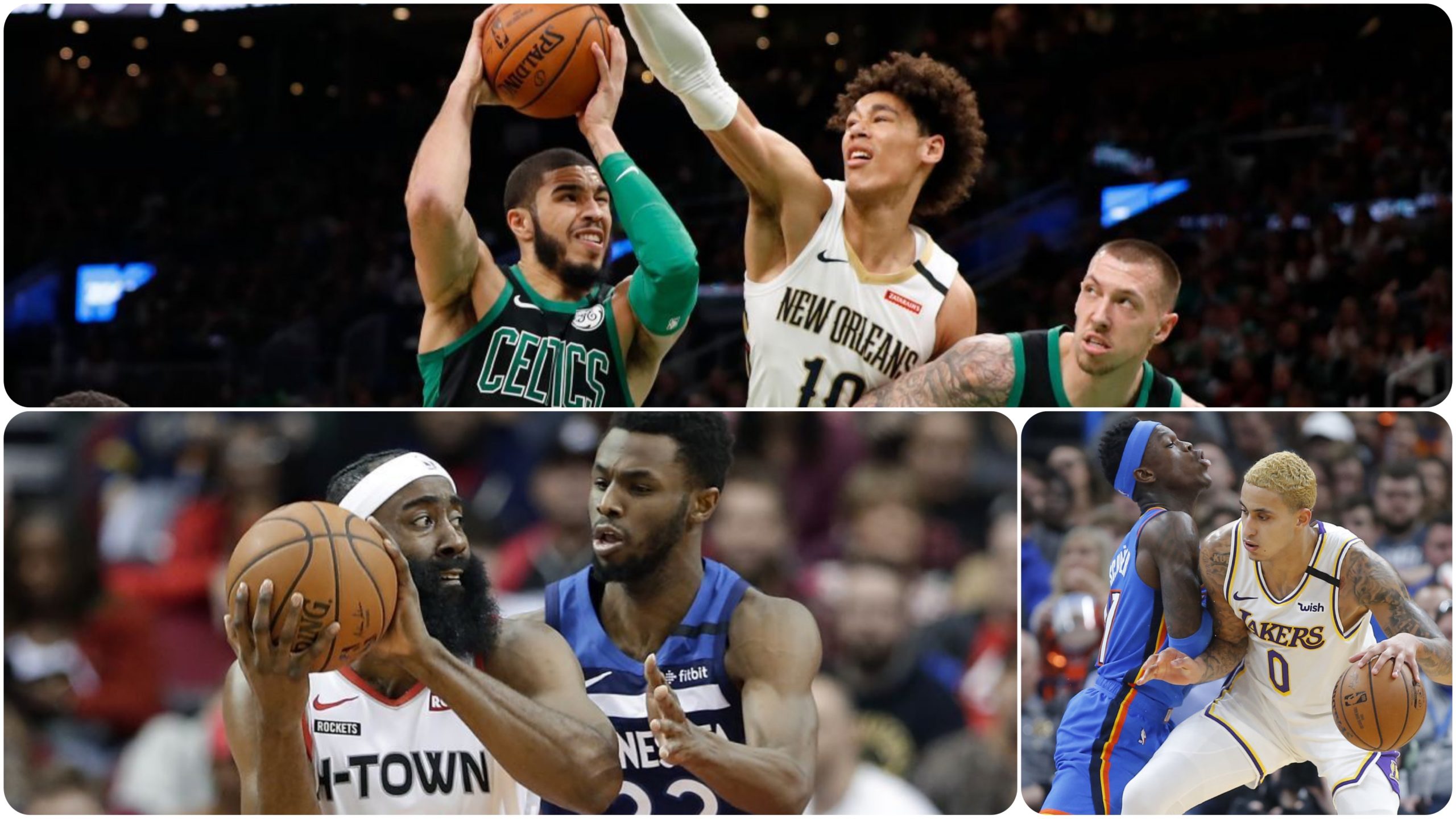 Jayson Tatum scored 41 points as Boston ended their losing streak, Kyle Kuzma dropped 36 on the Thunder, and James Harden scored 32 to thump the Timberwolves last night in a bevy of blowouts.

Seven games dotted the schedule last night with some blowouts that were expected to happen, and a couple that needed to happen to get teams back on track.

After using the Oklahoma City game as a team case of load management, the Houston Rockets unloaded on the visiting Minnesota Timberwolves last night, blowing the Wolves out over the second and third quarters, 80-56, to cruise to an easy 30 point victory. James Harden led all scorers with 32 points and surpassed the 20,000 point career mark. Russell Westbrook, who was the only bright spot for Houston in OKC, added 30 and Isaiah Hartenstein is putting up solid performances when he fills in for Clint Capela.

NEXT GAMES
Thunder at Timberwolves – Monday
Rockets at Grizzlies – Tuesday

Losing streak? What losing streak? The Boston Celtics put end end to their three game losing streak and made a statement to Danny Ainge and the rest of the league – there’s nothing wrong with the lineup the Boston Celtics currently have. If it ain’t broke, don’t fix it. Jayson Tatum dropped a career high 41 points and powered the Celtics to a 72 point first half, and the C’s had 114 by the end of the third quarter. Nine of the 14 teams that played last night didn’t get to 114 points as a final score.

NEXT GAMES
Pelicans at Pistons – Monday
Bulls at Celtics – Monday

The Chicago Bulls stampeded out to a 35-20 first quarter performance behind 12 first quarter points from Luke Kornet on the road in Detroit, putting enough distance between themselves and their hosts to steal a win last night. The Bulls shot 64 percent in that first quarter. Detroit had to go without the usual double double machine that is Andre Drummond, after he was ejected after 19 minutes for throwing the ball at Daniel Gafford’s head.

NEXT GAMES
Bulls at Celtics – Monday
Pelicans at Pistons – Monday

A chest cold. I remember Michael Jordan playing with the flu. I also remember LeBron James talking about playing through anything. No load management. All ribbing aside, to see what impact LeBron James’ leadership and work ethic has on his teammates, you just had to watch Kyle Kuzma, who has been a beneficiary ever since James came to L.A. Kuzma’s play of late is working toward silencing people who say he should be on the trade block for a third star. Ladies and gents, Kuz is your third star. Once L.A. jumped out to a 41-19 first quarter lead without James and Anthony Davis, this one was in the books, no matter what any former Los Angeles Clippers did.

NEXT GAMES
Cavaliers at Lakers – Monday
Thunder at Timberwolves – Monday

Just as you thought that the Philadelphia 76ers might be built to win without Joel Embiid, along come the Dallas Mavericks. The Mavericks won in Philadelphia last month without Luka Doncic, who scored 19 last night, and swept the season series by winning again last night in Big D by an 18 point margin, despite the best efforts of two former Tennessee Volunteers. Try as they may, they couldn’t match what Embiid brings to the game on a night when Ben Simmons was only about average.

NEXT GAMES
Sixers at Pacers – Monday
Mavericks at Warriors – Tuesday

What is going on with the Denver Nuggets? The team that shot to second place in the Western Conference in the month of December is now 5-4 since Christmas Day, including an embarrassing loss at home in the Pepsi Center last night to the Cleveland Cavaliers, a team who has nearly the opposite record. Many may have had an issue with head coach John Beilein crawling in the Cavaliers’ behinds like he did, but it seems to have lit a fire under them. Good for you, Coach. Maybe Mike Malone needs to do the same to the Nuggets … or should I call them Thuggets?

NEXT GAMES
Clippers at Nuggets – Tonight
Cavaliers at Lakers – Monday

Through all their trevails in the early 90’s, and the weed filled, Pepsi-can lighting, fake drivers license era that followed Portland, 2019-20 seems to have more question marks than ever for a team that made the Western Conference Finals and got blanked. Granted, the Milwaukee Bucks came to town last night and lit up 14 three pointers, Giannis Antetokuonmpo had 13 points and seven rebounds in the first 12 minutes, and the league’s best team cruised to a 21 point win in the Moda Center … that’s expected of the best team in the NBA. But Portland needs to figure out if they’re a team that’s going to compete to get back into playoff contention or toss the season completely. Right now, Antifa is more organized in Portland than the Blazers.

NEXT GAMES
Hornets at Blazers – Monday
Knicks at Bucks – Tuesday

********************
Tracy Graven is a Senior NBA Analyst for BackSportsPage.com.
He has written the NBA, and done NBA radio, for the last two decades for HoopsWorld, Swish Magazine, and HoopsHype, the Coach Scott Fields Show and NBARadioShow.com, and is also tackling the NFL, NCAA, and will be pinch-hitting on some Major League Baseball coverage for BackSportsPage.
He’s spent 20 years in locker rooms in Orlando, Boise (G League), San Antonio, Phoenix, and Oklahoma City.
A corporate trainer by day, he currently resides in Tennessee.
Reach him on Twitter at @RealTMoneyMedia