The New York Mets have had an unfortunate turn of events this week. Seth Lugo, one of their pitchers, will have elbow surgery to remove a bone spur. 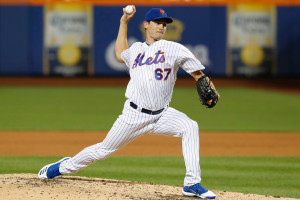 The New York Mets have had an unfortunate turn of events this week, learning that Seth Lugo will have elbow surgery to remove a bone spur. Jon Heyman posted this update via Twitter.

Lugo has a career ERA of 3.45, and has been with the New York Mets since 2016. Though last season was a shaky one, he has been a solid pitcher for them overall.

With Steven Matz traded to the Toronto Blue Jays, Lugo could have potentially joined Jacob deGrom, Carlos Carrasco, Marcus Stroman, and David Peterson in the starting rotation, although he has pitched primarily in relief over the last few seasons. In 2020, he threw 36.2 innings over 16 appearances, seven of which were starts. The Mets will now have to make other plans, potentially starting Joey Lucchesi in the five spot instead.

Lugo wasn’t a confirmed starter this year, and was being considered a bullpen pitcher. This being said, the Mets’ starting rotation will take no hit, it is their bullpen many are concerned about. Though some pieces are missing , the Mets still have Edwin Diaz, Trevor May, and a few other talented arms they can rely on.

Now, the Mets do need to add a few more high caliber relief pitchers. Only time will tell who this will include, but hopefully Seth can make a speedy recovery and get back on the mound without any complications. Though he has potential to be a good starter, the bullpen is where he is needed most for the Mets.