Weekly AL East Recap: The Wild Card Race is Closer Than Ever 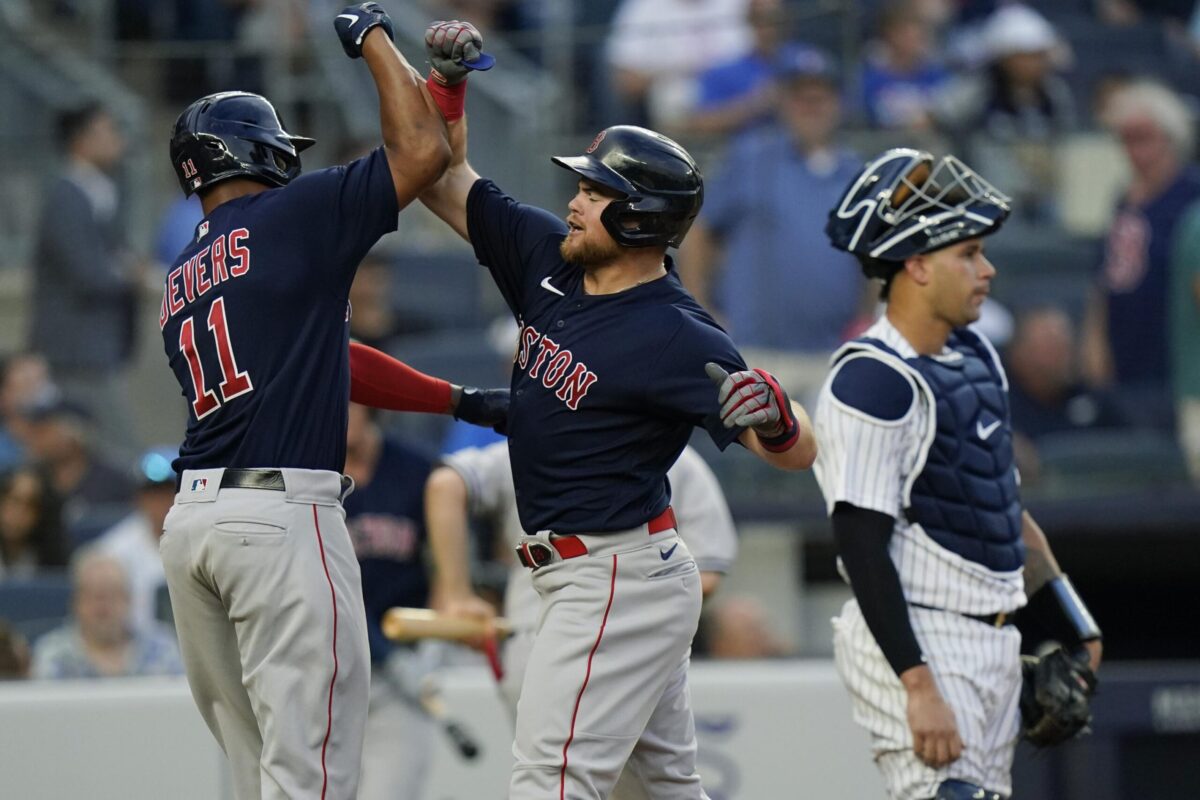 The AL East contenders tighten up as the Yankees drop a series to the Orioles, while the Blue Jays make a late push for the playoffs.

The Rays are inching towards an AL East title, but the Wild Card race has gotten closer since last week, with five teams within four games of each other.

If you did not already think so, the Rays showed why they are the best team in the American League, let alone the AL East.  A 4-3 week ended with a six-run comeback at Fenway with typical contributions across the board.  These guys will be favorites to make back-to-back World Series.

The Rays benefitted from some wacky plays in Monday’s wild win.  Nelson Cruz, one of the slowest players in baseball, hit a Little League grand slam off of two errors, and Austin Meadows hit an official inside-the-park home run.  They both homered earlier in the week, and Brandon Lowe also hit two.  Wander Franco‘s on base streak is still going on, and went 10-22 with a triple and three doubles.  Randy Arozarena and Kevin Kiermaier also tripled to round out the attack.

With Dietrich Enns‘ save this week, the Rays set the MLB record with 13 different players recording a save in a single season.  Their patchwork bullpen success continues to baffle many, as Shawn Armstrong and Adam Conley both pitched scoreless weeks.  Oh yeah, they have starters, as well.  Michael Wacha had his best start in a while, pitching a quality start.  Chris Archer got his first win in two years, so congratulations to him.  The same cannot be said of Luis Patino and Ryan Yarbrough, who were hit hard in less than three innings a piece.

You hear that?  That’s the sound of Yankee fans online losing their minds.  Their team had a 2-4 week featuring a series loss to the last-place Orioles.  There were articles before the weekend saying the Yankees needed to win all six of their remaining games with the O’s, but now they have already dropped two.

The offense was very inconsistent this week, and they disappeared all together in a shutout Monday.  Gary Sanchez led the way with three home runs, but two of them came in the same loss.  There aren’t many other hits to be found.  Anthony Rizzo and DJ LeMahieu were the only hitters with batting averages over .300 for the week.  Joey Gallo keeps slumping, as his home run was his only hit of the week.

Once again, Gerrit Cole was clearly the best pitcher on the Yankees for the week.  He gave up one run over seven innings.  Nestor Cortes was within shouting distance going 5.2 innings with just one run.  Jameson Taillon went seven Monday, but he gave up six runs in his previous start.  Corey Kluber went 3.2 innings in his return from the IL, but Andrew Heaney failed to piggy back, giving up four runs in just a third of an inning.  The up/down relievers also got hit hard, but Lucas Luetge had three scoreless appearances.

If the Red Sox miss the playoffs, remember Monday’s catastrophe.  With Chris Sale on the mound, they blew a 7-1 lead on some relief pitching and inexplicable defense.  They currently have ten players on the COVID-IL, including Xander Bogaerts, but that does not prevent them from playing fundamental baseball.  They ruined a lot of good feelings at the end of a 4-3 week, and the AL East crown is out of the picture.

With so many injuries, a lot of replacement players and AAA guys are getting playing time.  Jonathan Arauz played all six games and hit two home runs, but only got one other hit.  Taylor Motter and Jack Lopez, neither of whom I knew were still playing, are filling out the lineup.  The Sox claimed Jose Iglesias off waivers, and he got an RBI single in his first game back with the team that originally signed him.  There are still stars in the lineup, as Rafael Devers, J.D. Martinez, and Kyle Schwarber all hit for power this week.

Adam Ottavino got two wins and a save this week, but he and Garrett Whitlock were not reliable Monday like they usually are.  Call-up Kutter Crawford was no better with five runs in his debut.  The other starters were good, though, as Eduardo Rodriguez pitched six shutout innings and Tanner Houck five.  Nathan Eovaldi pitched into the seventh, and Sale gave up seven runs in two starts but was only charged with three.

The Blue Jays are making a run at the Wild Card, winning five straight games to wrap up a 5-1 week.  After sweeping the Oakland A’s, they celebrated Labor Day with shutout over the Yankees.  They have a real shot now at passing the teams ahead of them in the AL East.  Their six-run comeback Friday was arguably the best of the season.

Even during a good stretch, it is amazing to see seven players with an OPS of 1.000 for the week.  Marcus Semien, once again, led the way with a whopping five home runs.  Teoscar Hernandez was close behind with three, and Lourdes Gurriel was no slouch with two.  Vlad Guerrero Jr. got to 40 home runs, meaning him and his dad are only the second father/son duo to reach 40 home runs.  Alejandro Kirk and Danny Jansen both homered, which is rare for Toronto catchers to do in the same week.

A 3-3 week for the Orioles is their best in a few months.  Winning back-to-back games against the hated Yankees earned fans a reprieve from suffering and tiny amounts of hope for next year.  Amazingly, the Orioles have played better against the Yankees than any other team, with a respectable 7-9 record.

Cedric Mullins had two home runs and two steals this week, putting him in the exclusive 25/25 club.  Trey Mancini only played four of six games this week, but he went 6-13 with a home run and a double.  Kelvin Gutierrez cam up with a game-winning flare Sunday in the Bronx, and Austin Hays hit .308 with a homer for the week.