What You Need to Know About Jake Luton Going into Sunday 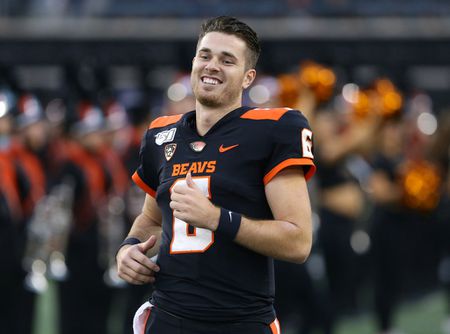 The Jaguars have been a face of instability in the NFL for quite some time. Specifically, they have struggled to find their franchise guy at quarterback:

Even when they did draft well and go to the 2017 AFC championship game, they could not retain any of their homegrown talent. Going into week nine, the Jaguars are in a familiar position at 1-6 and seemingly vying for a top spot in the NFL draft.

Just a year ago, there were some signs of life when 2019 6th rounder Gardner Minshew took over for an injured Nick Foles and went 6-6 in his 12 starts. The legend of the mustache was born and he was given the keys to this offense for at least the beginning of this year.

However, he hasn’t seen the same level of success as 2019, stands at 1-6, and there were rumblings that he would be benched early last week. Nonetheless, Minshew suffered a fractured thumb in their loss in week 7 against the LA Chargers. The Jaguars used the bye week to get rookie Jake Luton ready to get his first start.

The similarities between Luton and Minshew start and end at both QBs being 6th round selections from the Pac-12. Let’s take a look at Luton and what to expect going into his debut:

What sticks out is the size of Luton: a prototypical pocket passer who is big in stature. But it is also evident that he lacks any real athleticism or explosiveness.

Luton is an intriguing QB prospect. The only year he started every game in his college career was his redshirt senior year where he led Oregon State to a 5-7 record. That isn’t anything to scoff over as Oregon State. According to Bill Connelly’s S&P rankings, Oregon State was only favored in one game and projected a measly 2.6 wins. The oddsmakers in Vegas put their over/under at 2.5 before the season began.

Luton and the Beavers had different thoughts leading their team to their highest win total since 2013 when Sean Mannion and Brandin Cooks led them to a victory in the Hawaii Bowl.

Luton was asked to make pro-style throws in head coach Jonathan Smith’s offense and excelled at a high level. He is well-versed in play-action, which is a prerequisite for Jay Gruden’s west coast offense.

However, he cannot extend the play quite like Gardner. The OL looked strong out of the gate but has been awfully inconsistent allowing a league-worst 9.0% adjusted sack rate.

This is nothing new to Luton who had a brutal OL at Oregon State. But this isn’t the Pac-12; NFL teams will test Luton early.

Expect Gruden to lean heavily on James Robinson to offset the struggles Luton will inevitably work through. Gruden will script up plenty of quick game concepts, as well as screen/manufactured touches for someone like Laviska Shenault.

Guys like Shenault and Chark will have to bail Luton out when he pushes the ball down the field or else defenses will inescapably tee off on the young rookie.

His first start against Houston is definitely one of the more favorable matchups he could’ve gotten; it’ll be interesting to see if Luton has some of that Minshew moxy he had in 2019 to get the ball rolling again in Jacksonville.