Is Darius Slayton The Odd Man Out?

With training camp less then a month away, Darius Slayton is being what everyone expects him to be, a team player.

With that said, do the New York Giants have Slayton’s back?

All signs say that Slayton, who was picked in the 5th round of the 2019 draft will not be the primary part of the offense like he was a year ago due to the additions of Kenny Golladay (Free Agency), Jeff Ross (Free Agency) and Kadarius Toney (Drafted in the 1st Rd of the 2021 Draft).

Along with Toney, Golladay, and Slayton, the Giants still have Sterling Shepard which muddies the water a bit to figure who will be the main targets for Daniel Jones.

Head Coach Joe Judge, who has been known to be a player’s coach showed a certain amount of respect to Shepard as the veteran in the Wide Receiver room by calling him to discuss his role with the addition of Gollaway and Toney. Slayton was asked if he received the same call at a media session two weeks ago, his answer was “no.”

“This year after the Draft, I called Shep,” said Judge. “To me, it’s important to understand that, look, we are bringing in players to help this program and that the better each player plays, the more it helps each player on the team. We don’t look at any player on this program coming in as a threat or replacement. We look to go ahead and breed competition in this program and the best players will play. But I do think there is merit to talking to your older veteran leaders on the team and when you add someone at their position and just clarifying who you are bringing in and what the immediate plans are for that player.”

Slayton did not receive this call but for whatever reason it was a hot topic within the media room after the conference call. Is there merit to the thought that Slayton is not as big of a priority to Big Blue? 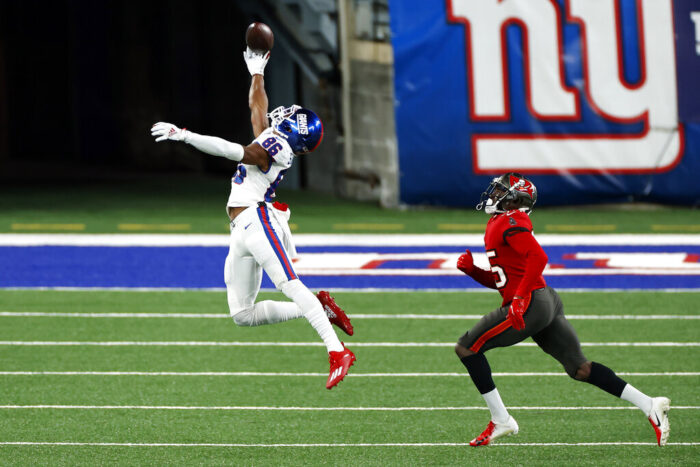 Slayton’s numbers rised slightly from 2019 to 2020, but with the options Daniel has, how much of a priority will Darius feel like if the attention is on the new toys? Slayton was the guy who has held things together during the building of the foundation and until now one of Daniel’s favorite targets.

This was one of the big questions heading into Giants camp next month.

Follow Randy Zellea and Ryan Stern on the Big Blue Report Podcast on the Back Sports Page Network!!