On Tuesday night you have a baseball player striking people out on a broken tibia.

The same night a top shelf NBA players sits out his game against the San Antonio Spurs due to right ankle soreness.

One is 37 years of age – the other will be there on December 30th; you’ll know it because he’ll have another slight malady, especially if Ohio State is in a BCS Bowl Game. Happens every year.

Can we at least agree how soft the NBA has become?

Charlie Morton – a pitcher for the Atlanta Braves – broke his leg in the second inning, stayed in Game One of the World Series, threw 16 more pitches to strike out Chaz McCormick of the Houston Astros, and got Martin Maldonado on a pop-up fly out. Next inning, he fans Jose Altuve before exiting the game. 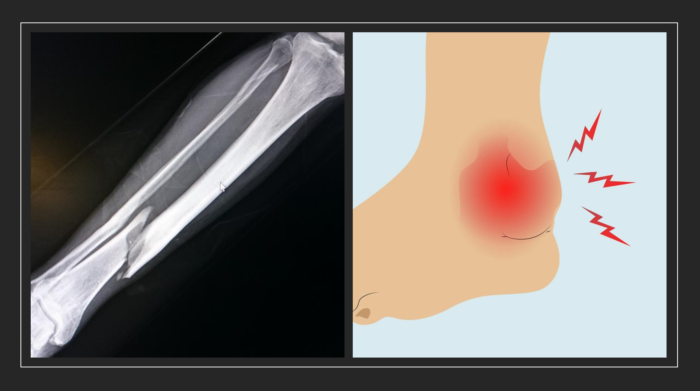 LeBron James not only sat out the game against the Spurs, but again last night versus the Oklahoma City Thunder. The result? Two losses, including gifting OKC their first win of the season.

Sure, those riding the LBJ Train will argue that Game One of the World Series and the fourth fifth games of a young NBA season are not even close to being the same thing.

But you can’t say you’d never sit out for no reason or from fatigue, because you’re a professional, when your actions say the polar opposite. 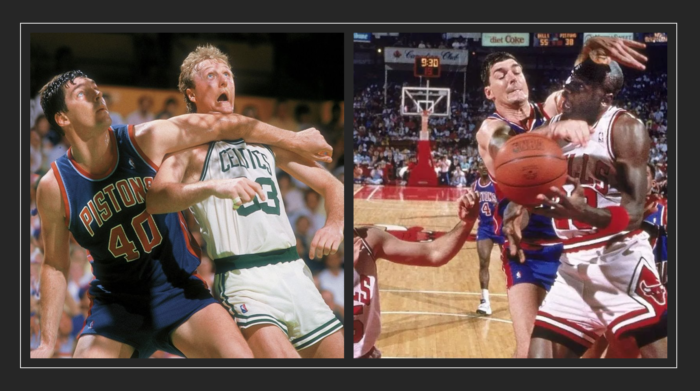 As one fan said, that’s the difference between a guy that wants to win and a guy who gets paid for wins. If James had to go against the teams of the 1980s and 90s – say, the Bad Boy Detroit Pistons and go in the paint against Bill Laimbeer or Rick Mahorn, he’d be crying to the officials more than he does today.

Knock down, drag out basketball is gone in favor of seeing who can shoot the furthest from the bucket or break someone’s ankles with a tricky dribble, step back 2-3 steps, hit a three, or win an Academy Award for most dramatic flop from being touched ever so gently or even coughed or farted on.

Then you have ankle soreness. Turf toe. And, God forbid, load management … more like a load of bullshit. Making and releasing rap albums shouldn’t take precedence over your full time, current job. Do it over the summer like Damian Lillard does.

Being able to inspire and direct your team is important. However, it’s even more important to ensure that you know what you should be doing.

Model what you want to see from others. Lead from the front. Be willing to submit to uncomfortable information and then use it to improve yourself. 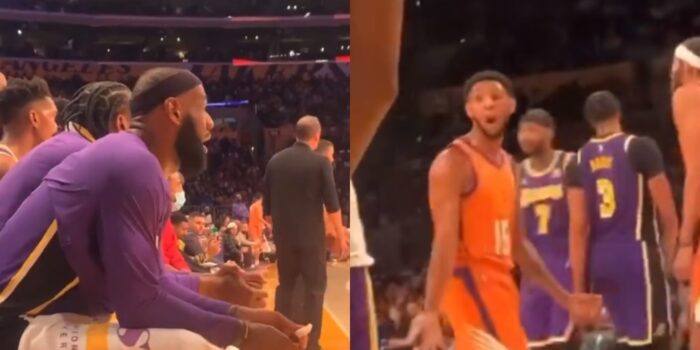 Not sitting on the bench yelling racial epithets at Cameron Payne just because he and his Phoenix Suns are torching you and your team. Definitely not taking two games off after that display of lack of character. Compared to that night, LeBron taking two nights off is so soft he might as well have been wearing a Snuggie made from Charmin Ultra Soft tp while poking Miley Cyrus’ foam finger on Nicki Minaj’s ass post-surgery.

What exactly “setting a good example” entails can be a little hazy, though. And James often tries to use that haze and Euro-step around that that to his advantage. (To be fair, it’s hard for Morton to Euro-step with a broken tibia).

It’d be nice to have the old NBA back where the referees let the players play … and play through the injuries.

If we can penalize Ben Simmons and Kyrie Irving, can we not do the same for the others who don’t ‘show up to work?’

I know I can’t just tell my boss I’m not feeling it today. I go in. I go to work. I set the example I expect from my team. It’s called responsibility, character, and integrity.

Besides, if die before I go to work, they’d call a seance to double check; and if I died at work, they’d make sure I clocked out first.

Kudos to Charlie Morton, for being the Iron Man you are; I hope it pays off in a World Series championship for you and the Atlanta Braves.

Shame on you, LeBron. 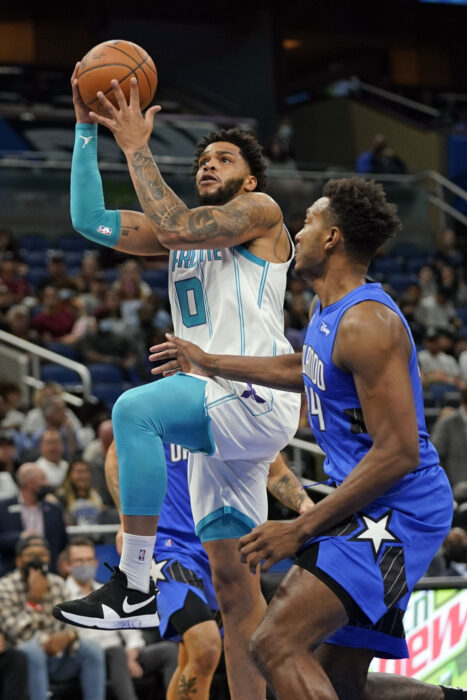 Charlotte’s swarming offense continued last night in Orlando, where the Magic seem to be forgetting to close the curtain when it comes to opposing teams seeing any tricks up their sleeve. While it’s shaking out that this is Cole Anthony’s team to lead, he’s doing it inconsistently, yet a work in progress. The story in Charlotte last season was LaMelo Ball, but it’s obvious from the last three games that Miles Bridges’ improvement year over year is proving to be as sweet as honey. After opening the season with a modest 13 point output in a win over the Indiana Pacers, Bridges has banged out games of 30, 32, 25, and 31 points for a five-game season average of 26.2 points per game – 12th in the league, sandwiched between Jayson Tatum and Brandon Ingram. Not bad company, Miles.

NEXT UP
Hornets at Heat – Friday
Magic at Raptors – Friday 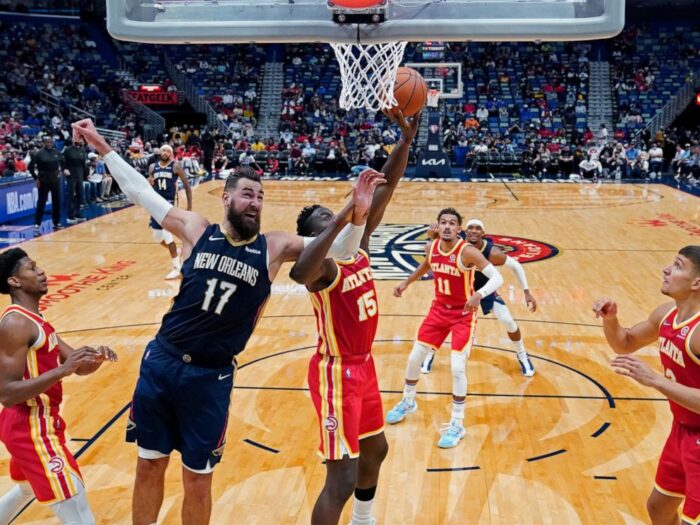 In a game that was much closer than it should have been, either the Atlanta Hawks struggled on the road in New Orleans, or the Pelicans seized upon an opportunity and came up just short. While it was a little of both, fans of both organizations will see it through their own lens. While Trae Young is special in his own rite, it was the defensive prowess and efforts of Clint Capela and John Collins that saved this one for Atlanta, as they were qa huge part of the Hawks’ 21 offensive rebounds, especially late in the game, giving the Hawks a win that should have been much easier.

NEXT UP
Hawks at Wizards – Tonight
Kings at Pelicans – Friday 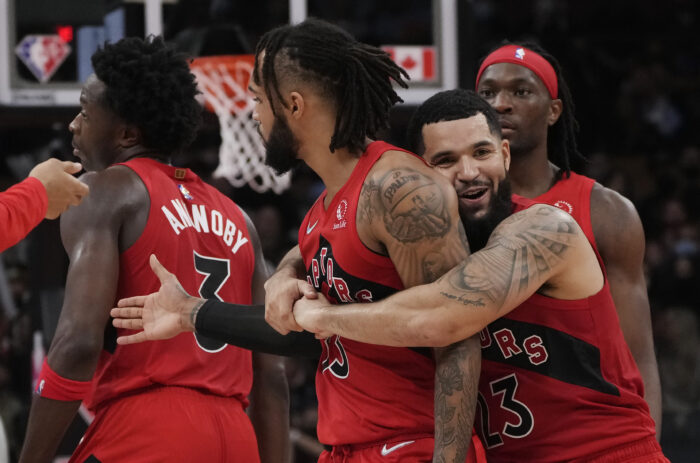 In Toronto, they’ve gotten past the virus’ outbreak by playing in Tampa Bay last season. They’re trying to prove to the basketball community – and themselves – that they can be a championship caliber team and that they didn’t just win a championship because Kawhi Leonard was there. Fred VanVleet seems to be leading that charge since Kyle Lowry took his talents to South Beach and Pascal Siakam is still recovering from a left shoulder injury. Scottie Barnes has my early vote for Rookie of the Year, as he helped VanVleet lead the Raps to their first win in T.dot in 20 months last night.

NEXT UP
Pacers at Nets – Friday
Magic at Raptors – Friday 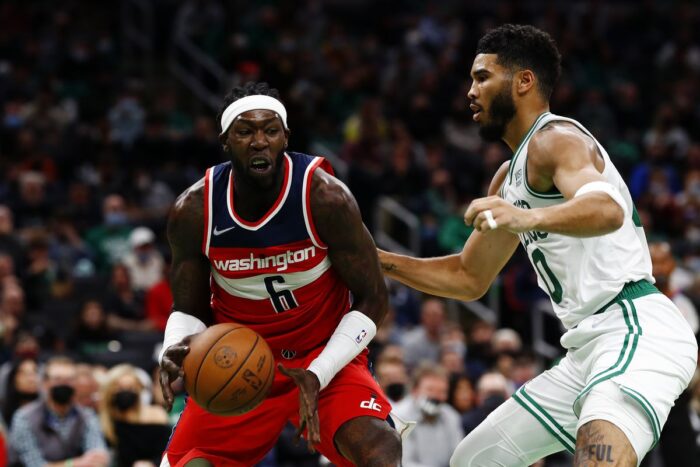 If you thought the Washington Wizards were just going to be the doormat of the Eastern Conference, think again. And if you thought that the team was going to be a ragtag squad of trade remnants floundering under a new rookie head coach, then you don’t know the name ‘Unseld’ very well when it comes to basketball. The Wizards are tied for second in the Southeast Division with Atlanta and Miami, as all only have one loss in four games. Charlotte leads the division at 4-1 only because they’ve played one more game than the rest. Keep your eye on the Southeast. 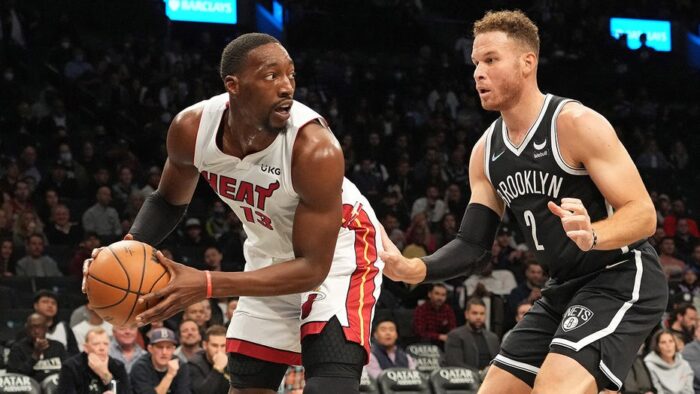 Brooklyn’s woes continue, as they lost their third game out of five last night at home in the Barclays Center. Kevin Durant continues to be a stalwart force for the team, but James Harden is not the same player that he has been nor what the Nets need him to be. Philadelphia 76ers President Daryl Morey is surely keeping tabs on the situation. Meanwhile, Miami continues to evolve in a direction that’s eventually going to get former Portland Trailblazers ball boy Eric Spoelstra into the Pro Basketball Hall of Fame. (Yes, that’s how long I’ve known the coach and his sister Monica Spoelstra, since I am from Portland). Kyle Lowry finally made his presence felt with nine dimes on the road.

NEXT UP
Pacers at Nets – Friday
Hornets at Heat – Friday 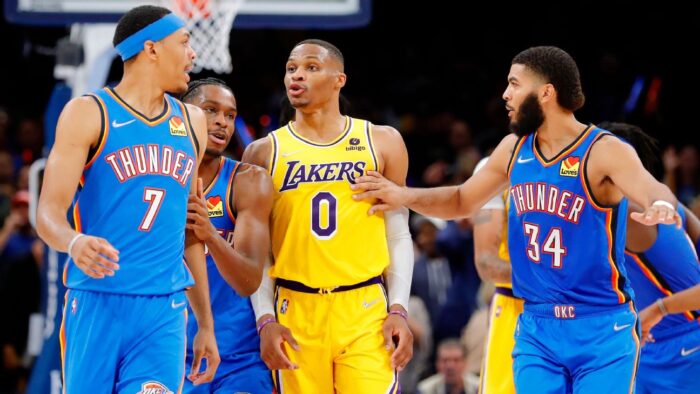 The Oklahoma City Thunder took advantage of the absence of LeBron James from Los Angeles’ lineup, and while former Thunder staple Russell Westbrook served up his first triple double of the season with 20 points, 14 rebounds, and 13 assists, the Thunder got their first win of the season by going five deep in double figure scoring, Shai Gilgeous-Alexander leading the way with 27 points, nine rebounds, and five assists – not quite a triple double, but they get the win … and Westbrook was ejected from the game.

NEXT UP
Cavaliers at Lakers – Friday
Thunder at Warriors – Saturday 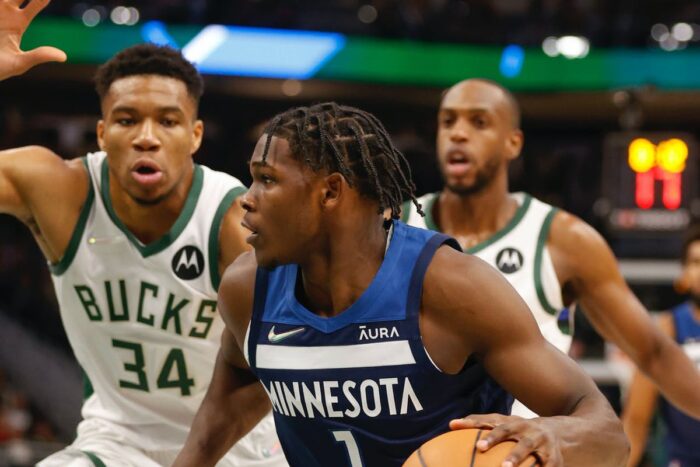 The Minnesota Timberwolves are ready for prime time, and proved as much against the reigning champion Milwaukee Bucks last night, despite 40 and 16 from Giannis Antetokuonmpo. Karl-Anthony Towns and Anthony Edwards are proving to become a lethal combination in the front court, something Antetokuonmpo could not stop last night. 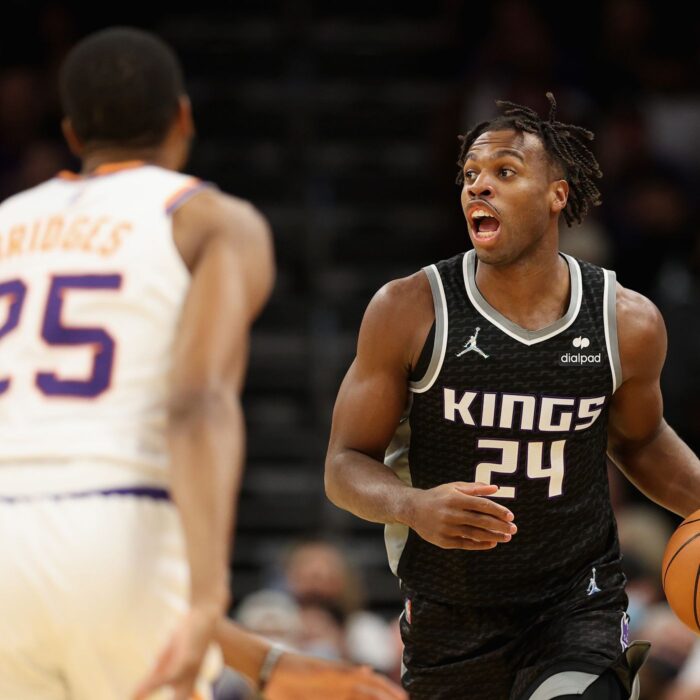 The Sacramento Kings are like high blood pressure, becoming the NBA’s silent killers because there are no visible signs that they are going to defeat you. The Phoenix Suns have a lot of ground to make up, as they sit at 1-3 and 12th in the West after last night’s home loss. The last time Phoenix sat this low in the West, they ripped off eight straight in the bubble in Orlando to just miss the asterisked playoffs. Can they do it again? The haughty Cleveland Cavaliers are their next opponent – they’ve won three straight.

NEXT UP
Kings at Pelicans – Friday
Cavaliers at Suns – Saturday 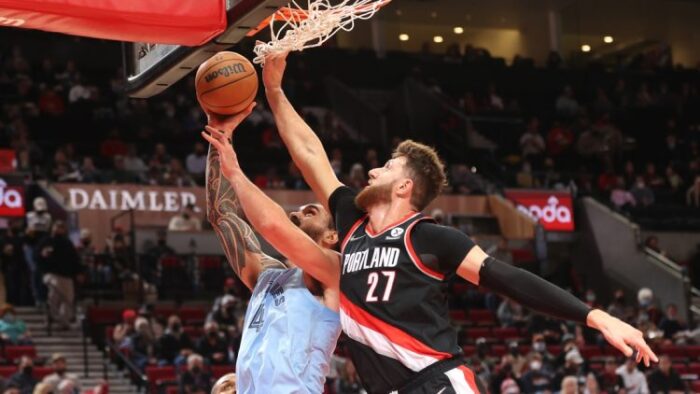 It’s always been said that no one man alone can defeat five, as is being proven by Ja Morant and the Memphis Grizzlies in their last two games against the Los Angeles Lakers and last night in Portland, where C.J. McCollum is becoming more the face of the Trailblazers while new head coach Chauncey Billups is morphing Damian Lillard into a more complete player. The Grizzlies’ task doesn’t get any easier as they go to San Francisco to face the undefeated Golden State Warriors.

NEXT UP
Grizzlies at Warriors – Tonight
Clippers at Trailblazers – Friday

J.B. Bickerstaff has the Cleveland Cavaliers at 3-2 and those three consecutive wins have come at the expense of the Atlanta Hawks, Denver Nuggets, and last night, the Los Angeles Clippers. It put the Nuggets on a two game skid, and they face the Los Angeles Lakers next, who are on a two game slide coming into tomorrow night’s game.

NEXT UP
Cavaliers at Lakers – Friday
Clippers at Trailblazers – Friday 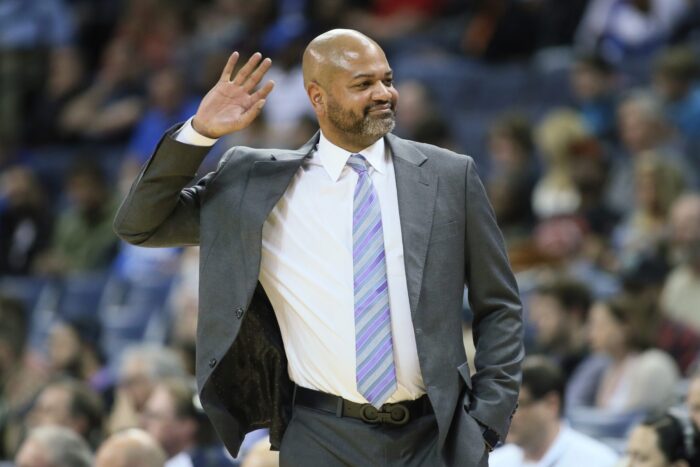 The Rundown v102721 – Warriors and Thunder Continue in Opposite Directions
The Rundown v102921 – Morant Takes Down Warriors, Walker Ends the Running of the Bulls, Jazz Now a Solo Act