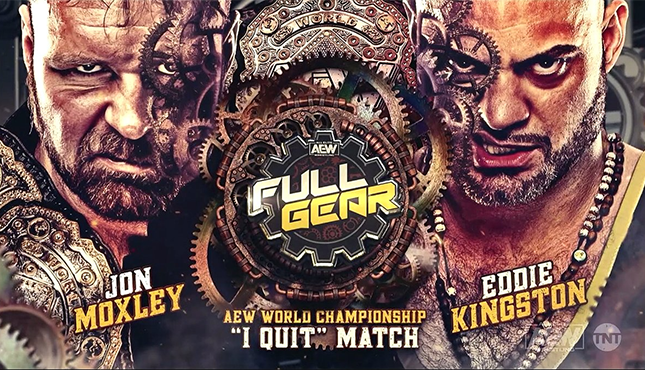 Tonight, All Elite Wrestling presents their next foray on pay-per-view with the second edition of Full Gear, airing live from Daily’s Place in Jacksonville, Florida. The card is stacked with great matches from top to bottom, featuring the first-ever “I Quit” match in AEW and the finals of the World Title Eliminator Tournament. Read on for my matches to watch on the show tonight along with my predictions for the three.

Talk about a main event! These two have been going at it for weeks, delivering scathing promos almost on a weekly basis, with this past Wednesday’s faceoff between the two being the best of the bunch. That promo really sold just how hard Kingston has worked over his 18-year career to get to this main event spot and how far Moxley will go to ruin it and retain his title. The two met for the title back on Sept. 24 with Moxley retaining by referee stoppage. Kingston argued that he never tapped and never quit, leading to tonight’s I Quit match. I fully expect this match to be absolutely brutal with blood spilled by both men. I think this is the time for AEW to pull the trigger on the fast-rising Kingston and give him the title, which is exactly what I think the company will do by having Moxley say “I Quit”. Prediction: Eddie Kingston becomes the new AEW World Champion

The finals of the World Title Eliminator Tournament will see former friends and tag partners Kenny Omega and Adam Page meet with a future AEW World Title shot on the line. After losing the tag titles at September’s All Out pay-per-view, Page found himself as the odd man out of The Elite with The Young Bucks and Kenny Omega kicking him out for his actions in and out of the ring. The slow burn of this storyline has been some of the best storytelling seen in recent wrestling, and I’m extremely excited to see these two finally meet in the ring. When the tournament bracket was announced, I think everyone knew these two would meet in the finals and now we get our wish. I think the time is now to let Kenny Omega start his pursuit for the AEW World Title, so I expect him to get the win tonight. Prediction: Kenny Omega wins and earns a future AEW World Title opportunity AEW Full Gear begins at 8 p.m. on pay-per-view with the Buy-In pre-show beginning at 7 p.m.