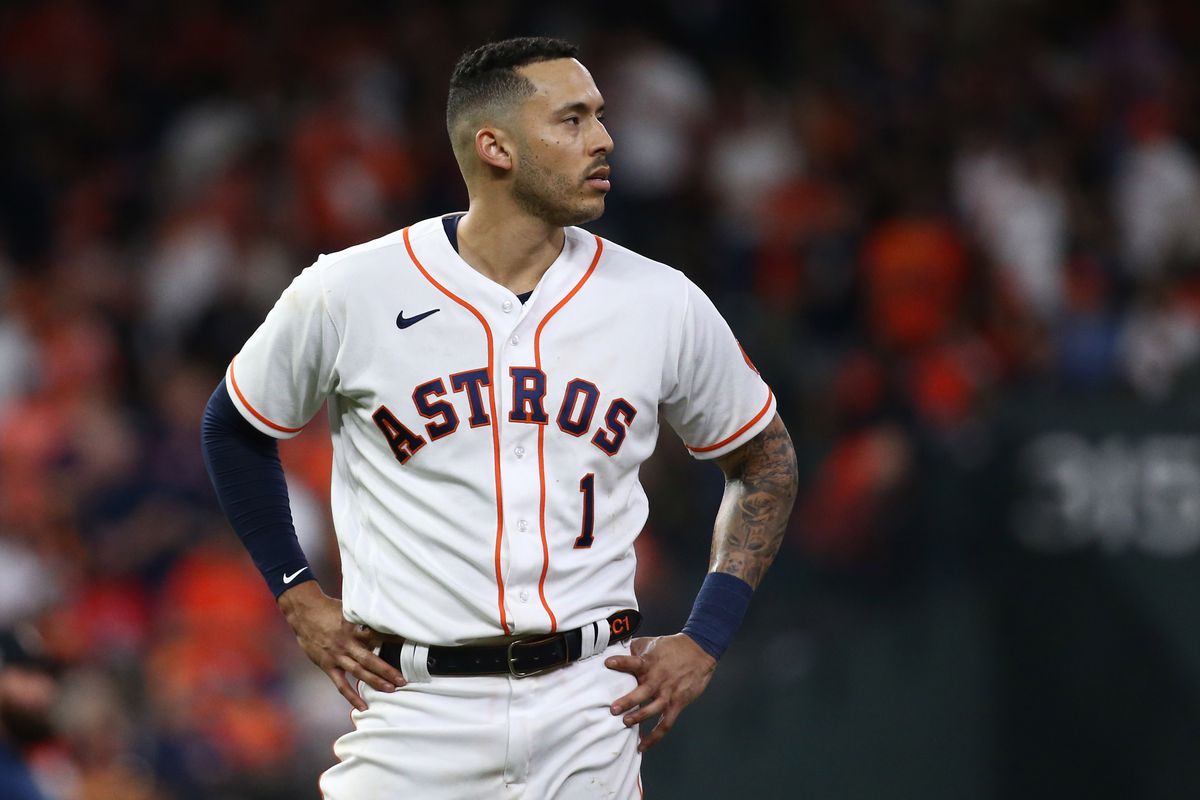 The Minnesota Twins take on the Houston Astros for a three game set this week. It’s been since Game 6 of the 2021 World Series that Carlos Correa stepped on the field in Minute Maid Park. The 27-year old signed a 3 year, $35 million deal with the Minnesota Twins last offseason with a player option each year should he decide to leave the team.

While Astros fans definitely wanted to keep the All-Star on the roster, they understood his reasoning behind the decision to leave. Astros owner Jim Crane thought throwing in more than $30 million for 7-10 years was too much to retain Correa.

Houston Astros fans remember how important Carlos Correa was when he wore the blue and orange. The 2012 number one overall pick made an immediate impact in Houston when he was called up in 2015 and won Rookie of the year. Additionally, Correa contributed to six playoff berths, with five of them being ALCS appearances and three World Series appearances. He even put the team on his back during the sign stealing allegations, and was very vocal in retaining the spirit of Houston Strong.

A tribute to his greatness

Although Correa will be in the opposing dugout in this three game series, fans are excited to see him on the field and recognize his historical contributions to the team. There’s just too many to choose but a few notable ones are:

No need to worry

Besides the punishment Houston faced due to the sign stealing scandal, Houston’s farm system is still one of the best in the league. Newcomer Jeremy Peña has fitted in nicely as the starting shortstop. He’s got two walk off home runes, is 2nd defense WAR (Wins Above Replacement) with 1.9 (which is better than Correa this season), and on a much cheaper rookie deal. This allowed James Click to give players like Yordan Alvarez a contract extension.

Over the last month, Pena took a dip in production. This is relatively normal for rookies, as it’s their first time experiencing a 162 game season. The Astros have the best record in the AL at 78-45, lead the AL West by 12 games, and are poised to make another playoff run to the Fall Classic. It’s safe to say losing Correa didn’t hurt one bit.

Where does Correa end up?

Carlos Correa took this player option deal for a reason. He has the choice to walk if he feels the Twins aren’t a good fit. The All-Star Shortstop wants to play for a contending team and become one of the highest paid players in the MLB. Currently, the Twins are couple games back in the AL Central and three games back in the Wild Card. The easy route would be to overthrow the Cleveland Guardians, who are 1st place in the AL Central. They have plenty of time to make a run for the AL Central crown, but to the World Series? It’s unlikely. If Minnesota doesn’t make the playoffs, Correa might opt out and find another contending team that’s willing to offer a lengthy deal.