For Memphis Grizzlies, Past Fuels Future 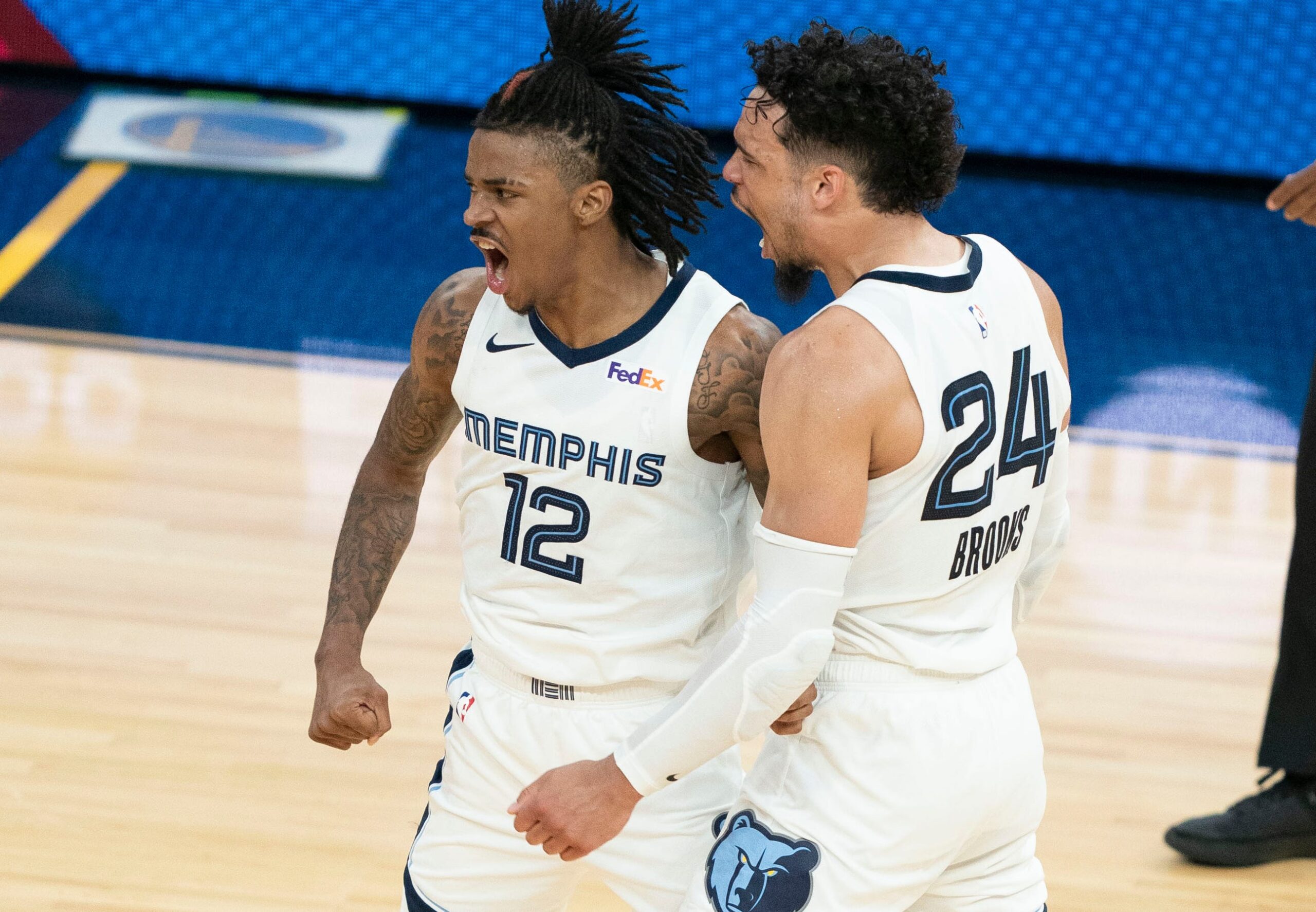 As the buzzer sounded at the end of the Memphis Grizzlies’ 117-112 victory over the Golden State Warriors, jaws began to drop across the basketball world. Never mind that the Dubs were the clear favorites in the eyes of Vegas or the general public, even the experts were taken completely off guard by the win–in a panel of over ten ESPN insiders, only *one* predicted a Grizz victory. In the eyes of the broader audience this upset was a shocker. But in reality, this didn’t come out of nowhere. In fact, it’s been building for a very, very long time.

For one, the Grizzlies’ path to success began in last year’s play-in game, where they acquired some valuable experience in a close, if not preventable loss to the Portland Trail Blazers. It’s a game that put a chip on the shoulders of Memphis’ young roster, both for the players that saw the court and the multitude of Grizzlies who were subjected to watching from the sideline, harnessed to the team’s injury reserve.

Of those Memphis Grizzlies who missed last year’s play-in game, it may have been most difficult on Jaren Jackson Jr, who was sidelined with a torn meniscus. “This is what I play for,” Jackson said after Memphis’ triumph over San Antonio. ”The whole reason I came back is to play in games like this. I’m just thankful to be out there, it definitely was a long year, and [last year], not being able to play in the last game of the previous year was really hard to watch. I’m just really glad to be out there helping the guys and it’s a lot of fun playing in these meaningful games and winning games that matter.”

In Jackson’s two efforts in must-win games, the Michigan State product was a whopping +14–impressive, considering the combined margin of victory across those contests was only +9. Equally vital was the play of Tyus Jones, who was held out of the Bubble’s play-in game with a nagging right knee injury. Though the sixth-year man found himself on the periphery of the rotation, his IQ proved a stabilizing force for Memphis against a vastly more experienced Warriors team, boasting multiple players who’ve made numerous trips to the NBA Finals.

Having these two in tow has been nothing short of a motivational spark for the Memphis Grizzlies. I asked Ja Morant about how he felt regarding the presence of Triple J and Tyus. “[I’m] extremely happy,” he said. “It just shows how deep our roster is. With Tyus, veteran guard, and Jaren on his third season just getting back and jumping right into high intensity games and being able to affect [them] is big for us. We try to tell each and every one of our guys when they go out there to play with confidence, and those two showed up big for us”.

The path to redemption continued amidst a regular season littered with injuries, throwing an unexpected obstacle in the young team’s path. Rotations were changing constantly, lineups were tinkered with, and chemistry waxed and waned, all while seemingly half the team rehabbed their ailments. But, credit Taylor Jenkins and the team’s focus. In that time span, the squad honed in on their ‘next man up’ mentality–forcing everyone into staying ready to contribute, regardless of the situation. Given that Memphis was forced to roll out unused lineups against the Warriors’ onslaught and close their most important games with a rookie center, I’d say their work paid off tenfold. “A lotta work behind these smiles,” as Jackson said postgame.

Perhaps nobody modeled the ‘next man up’ approach against Golden State more than Grayson Allen. Having played just five minutes against San Antonio and missing over a week’s worth of games in the buildup to the final showdown, one might’ve expected Allen’s rust to sink the team. Instead, the Blue Devil gave Memphis 25 rock-solid minutes (finishing +17!), including a pair of crucial threes in the overtime period.

“I’ve had a bunch of weird injuries this year, a lot of stuff that’s out of my control,” said Allen.  “So there have been a couple times now where I’ve had to get back into the rotation or starting lineup. It’s been different spots, different moments, different minutes, and [the key’s] been just being ready, trying to keep that same mindset that I’ve had through the injury, and keeping that same confidence in finding my rhythm out there on the court.”

Then of course, comes the infamous late-game struggles. Down the stretch of the regular season, the Grizzlies couldn’t close out a contest to save their lives, blowing leads to the Knicks, Timberwolves, even the Orlando Magic. That boogeyman dates back to the play-in game: don’t forget that Memphis led that one heading into the fourth quarter (CJ McCollum scored 13 in the fourth to put that one away). And yet, when it mattered most, the Grizz were ready, clinging on to their lead and burying the Dubs and OT with an Xavier Tillman triple. I’m gonna repeat that once again. A rookie hit the biggest shot of the Grizzlies season–if that’s not special, I don’t know what is.

Ever the humble rook, Tillman pointed to Ja Morant as the tone-setter for the team’s finish. “You look at Ja,” said X, “[he] had that same floater opportunity in multiple games. He was talking about it like ‘stay with it, stay with it’, we just trust in him, that’s our guy. Having that trust, having that faith, game in and game out in the same situation, it just builds on. Finally it manifested today”.

Nevertheless, both Tillman and Desmond Bane recognized their ability to build off the crunch-time struggles, especially as such a young team. “Experience is something you can’t put a price on,” commented Bane. “All of us are young guys trying to find our way in this league. Coach giving us those opportunities to close games and be on the floor definitely gives me confidence, and I know it gives [Tillman] confidence in games like this.”

Of course, now Memphis’ young guns find themselves in completely new territory: a full-on playoff series. Though the Utah Jazz swept the season series against the Grizzlies (find out why here), you’re clearly not watching this team closely if you think their confidence will come close to wavering. Regardless of the outcome, two things are for sure. One, the Grizzlies have officially made their presence known across the NBA landscape. Second, and more importantly, playoff experience is invaluable. Win or lose, you can be sure that with that experience under their belt, the Memphis Grizzlies will continue to fuel their future with their past.

Can Paul George Be Trusted In The Postseason?
Celtics vs. Nets Playoffs Game 1 Takeaways