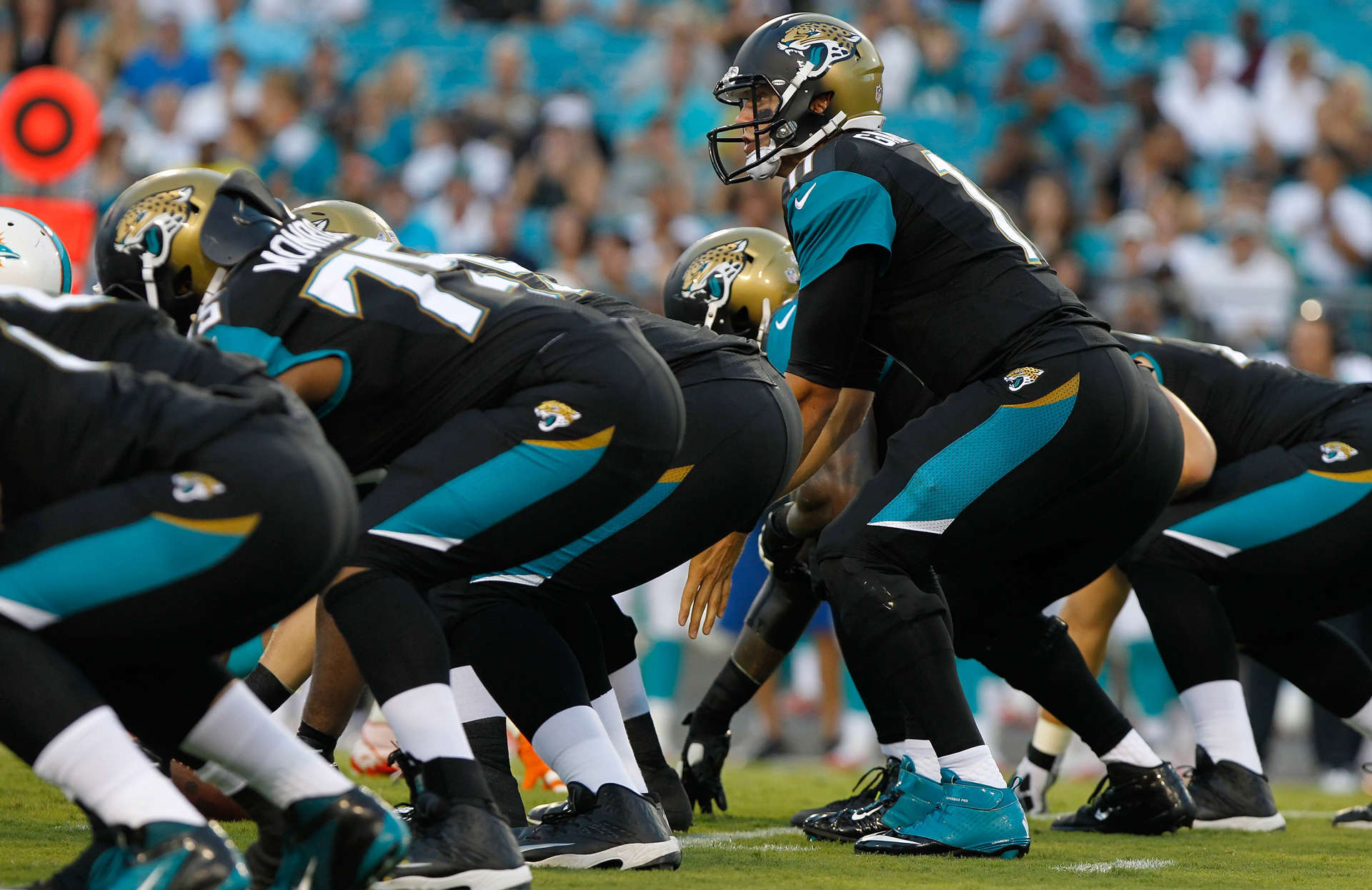 The Jacksonville Jaguars have only held one public training camp practice in 2017, and already they’re making national headlines…for all the wrong reasons. This past Saturday, fans and media were subjected to a practice in which their starting quarterback threw five interceptions. While the Jags defense should get some credit for creating pressure and turnovers, the fact is, all of these picks were on Bortles. He looked absolutely terrible. Going into his fourth season, this is a contract year for the young signal caller from UCF. If he doesn’t produce at a high level, the Jaguars will most likely not pick up his fifth-year option, making Blake Bortles a free agent in 2018, and sending the Jaguars back to the draft room to find another guy.

All of the talk leading into today’s practice was focused on Bortles..that is until about 9:00 am. This is about the time that Branden Albert announced his sudden retirement. Albert, a nine year veteran left tackle, was acquired by the Jaguars via trade with the Miami Dolphins back in March. Albert was expected to earn the Jaguars starting job at left tackle, a position of dire need since the team decided to move on from former first round pick Luke Joeckel. Behind Albert, the Jags were planning to groom 2017 second-round pick Cam Robinson, the starting left tackle from Alabama. As fate would have it, Robinson could wind up being the Jaguars starter at left tackle in week one.

It was an un-seasonably cool day in Jacksonville, with highs only reaching the mid 80’s, plenty of cloud cover and a nice breeze. As the team took the field at 10:30 am, there didn’t seem to be a whole lot of energy. I saw a lot of nervous faces, which is to be expected in training camp. One guy that stood out was third year linebacker Telvin Smith, who jogged out onto the practice field like he couldn’t wait to put in work. The rest of the team seem to lack Smith’s swagger.

As the team went into their individual drills, I got a chance to watch the offensive line go through their drills. Tony Sparano Jr., the team’s assistant offensive line coach, had the linemen working on angle blocks nearly the entire time. He was teaching the line to recognize their man, as head up, outside or inside. He was also teaching them to take an open step before engaging the defender. In Sparano’s words “we’re losing ground to gain leverage”. Why is this important? Because it means the Jaguars are installing a zone run scheme, similar to the Mike Shanahan made famous. The zone run scheme is easy to teach, and easy to execute, compared to traditional man-on-man schemes. It gives the running back the ability to pick his hole, then run downhill. It also creates natural cut-back lanes for more shifty backs, like T.J. Yeldon. If the Jags can master their ground attack, it could take a lot of pressure off Bortles this season.

With the sudden departure of Albert, I was obviously curious to watch the left side of the offensive line practice. At left guard, the Jaguars worked out Patrick Omameh, who started six games for the Jaguars after Joeckel’s season-ending knee injury may be the projected starter at this position, though head coach Doug Marrone is insistent on stating that everyone on the team must “earn their position”. From what I saw, the Jags don’t have a lot of options here. As I watched Omameh, he looked slow, his feet were often wrong, and he didn’t seem to fire off the ball with the level of intensity that you’d like to see from a guard. However, against the rushing defenders later in practice, Omameh did a good job of protecting Bortles (especially on a MLB A-Gap Blitz).

At left tackle, Cam Robinson looked lost out there. After nearly every drill, he was either asking questions, or being coached up by Sparano. He was frequently beaten by rushers in one-on-one drills, and was clearly struggling to put it all together. This is to be expected of a rookie left tackle, even one from Alabama. But make no mistake, the kid can play. Versus Alabama, I watched Cam Robinson absolutely stonewall Myles Garrett, who many considered the best pass rusher since Reggie White. The key to Robinson’s success will be his ability to develop into an NFL caliber left tackle in a division where he’ll have to face guys like Jadeveon Clowney and J.J. Watt twice a year. One of the biggest mistakes the Jaguars made was throwing an inexperienced Luke Joeckel in at left tackle before he was ready. Will the Jags make the same mistake with Robinson? Do they even have a choice?

After the individual drills, the Jags quarterbacks and receivers got together to run the route tree. Of particular note, Marqise Lee showed some excellent route running and hands on a couple of plays. Lee is a speedster, capable of getting behind the defense for a big play. If he can develop as a route runner, he could prove deadly in the slot this year.

The Jaguars worked a lot on special teams today. First, in the punting game, where Brad Nortman made some nice end over end punts, but also shanked a few ugly ducklings to the left sideline. At punt returner, the Jags worked out Arrelious Benn, Rashad Green Sr., and Marqise Lee, none of which were able to create any lightning.

When the offense and defense came together, it was all about situational football. The offense was practicing it’s two-minute drill, with the goal of getting downfield and controlling the clock to set up a game winning field goal. Backup quarterback Chad Henne started the drill, and led the team into field goal range, despite a couple of errant throws. Next up was Blake Bortles. Bortles showed very good timing and accuracy on his throws. His ball placement was excellent, putting the ball where only his receivers could make a play, and he wasn’t afraid to take his check-downs. This resulted in 14 completions, no interceptions, and a last second field goal.

Last, but not least, the Jaguars went into a more traditional offense versus defense style practice. Henne started and moved the ball pretty well, but didn’t really make any “wow” plays. Bortles then came in and continued to poise and accuracy. He found running back Corey Grant, and laid the ball in perfectly for a big gain. Later, Bortles was able to show that same touch on a go route to wide receiver Marqise Lee that was set up in part by a great pass block by Leonard Fournette. Fournette also had a decent run to the right side, showing burst and open field. The first-round draft pick did however fumble an exchange from Bortles, that caught the ire of Tom Coughlin. For a few plays, Coughlin had Bortles and Fournette stand by him on the sideline and practice handing the ball off. With as much heat as Bortles has been under, he’s still clearly the best quarterback on the Jags roster. Neither Henne, nor camp arm Brandon Allen showed any real signs of challenging the position. The offense moved more crisply, had better timing, and looked noticeably more in tune with Bortles at the head than either of the other quarterbacks. Which is what one would expect of a starting NFL quarterback.

After practice, I was able to catch up with linebacker Hayes Pullard III, who played in all 16 games last season, and notched 9 tackles. Pullard took full credit for bringing in today’s L.A. style weather to practice, and says he’s learning a lot from both Paul Posluszny and Telvin Smith. Pullard, a seventh-round draft pick out of USC in 2015 has shown enough hard work and ability to stick on the Jags roster since being acquired off waivers by the Browns that same year.

All in all, the Jaguars had a good practice today. It’s early yet, but one can already see the fingerprints of Tom Coughlin showing up in the little things. Though true, it’s often the little things that kill in this league, the glaring issues at offensive line and consistency of Blake Bortles will be worth watching both in training camp and pre-season.