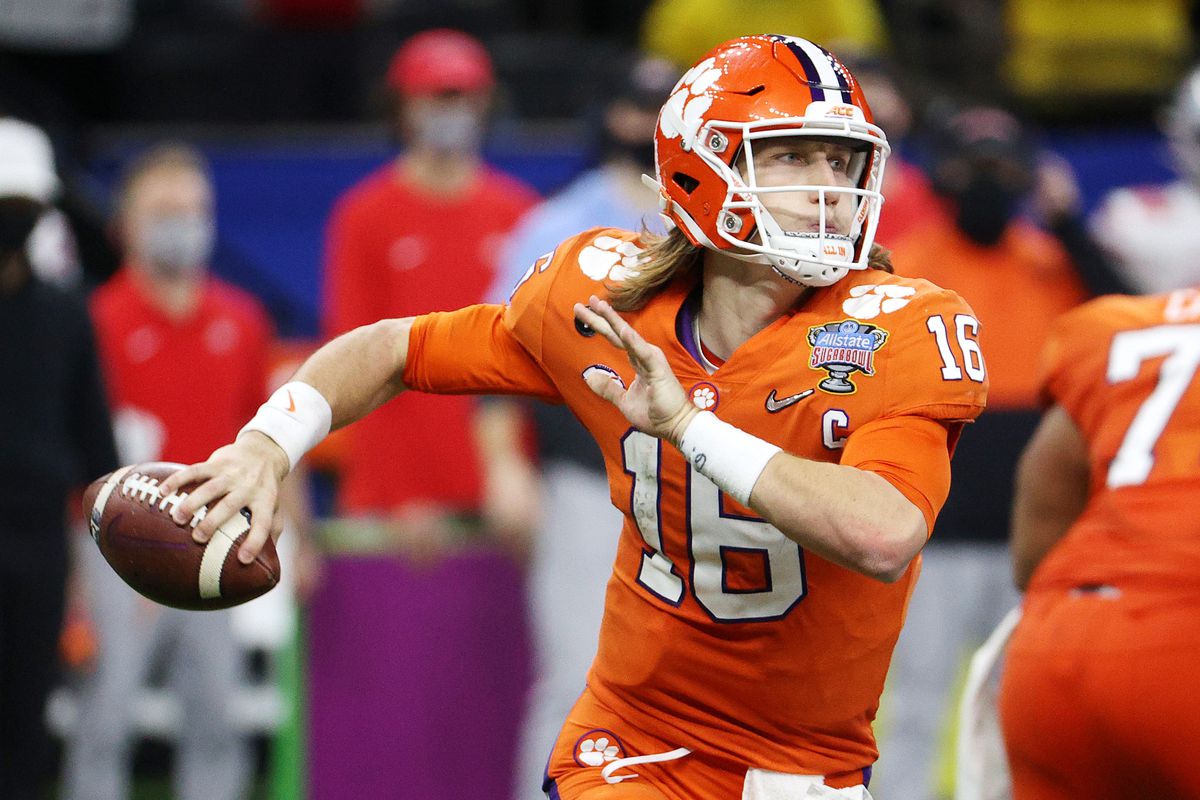 It’s Draft Week and we’re down to the final day before the 2021 NFL Draft kicks off on Thursday night. Why not cap it off with a mock draft? More deals have gone into effect including Teddy Bridgewater being traded to the Denver Broncos, but will it affect Denver’s decision on whether they go Quarterback or not? Let’s find out!

After the Sam Darnold trade to Carolina, it was obvious that Quarterback is the way that they wanted to go. Wilson is the guy that the Jets have been eying on as he can make every throw. Durability will be his main concern with injury history in the past.

The 49ers do not move up and give up this much to not take a Quarterback either. Word is that the pick is between Mac Jones and Trey Lance. It all could be smoking mirrors, but for this sake Jones had a tremendous year last season at Alabama capping it with a National Championship.

Even with it being the day before the NFL Draft, I still don’t know what direction Atlanta may go. They can ultimately trade back, go Quarterback, or even Offensive Lineman. Arthur Smith loves using two TEs and play-action so Pitts would be an instant upgrade on offense, but not sure long-term if it’s the answer 100 percent.

With QB Joe Burrow returning from his knee injury I know it would be great for him to partner back up with his star Wide Receiver at LSU Ja’Marr Chase. However, the last time we saw Burrow on the field he was being carted off it. Protect Burrow and take Sewell.

Miami needs a true WR1 here at No.6. Talks have come out that the Dolphins favor Alabama WR Jaylen Waddle over Chase, but it could all be smoking mirrors with this pick as well. Chase is the best WR in this draft class and gives Tua Tagovailoa a true WR1 on the outside with Chase.

Detroit loses Kenny Golladay to the Giants in free agency, and that Wide Receiver Corps in Detroit is abysmal. Jared Goff may not be the long-term answer at QB, but while he’s there, give him some weapons.

Like other teams in the top 10, Carolina could go many different directions as well. Justin Fields is in play here at eight, but the offensive line for the Panthers stunk last season. Slater improves Carolina’s offensive line tremendously.

Yes, Denver just traded for Teddy Bridgewater, but it does not rule out that they are out of the running at getting a Quarterback. At this point, it’s either Fields or Lance, take Lance where it’s no need to rush him out on the field while Bridgewater and Drew Lock battle to be the starter.

Although Jerry Jones was Kyle Pitts A LOT, Dallas’ defense was terrible last season. Surtain is the son of former NFL CB Patrick Surtain Sr. and he’s a safe pick here for the Cowboys.

The Giants could go on the other side of the ball and grab an edge rusher or LB Micah Parsons. I’m going to give Daniel Jones another weapon to see how he progresses this season. With RB Saquon Barkley on track to return week one this season along with Evan Engram and Kenny Golladay, the offense should look good.

The Eagles would love to add a WR to their team, but they also need another corner to pair up with Darius Slay. The top three WRs are gone at this point, take the next best corner which is Horn in this case.

Just like Cincinnati, the Chargers need to protect QB Justin Herbert. Darrisaw is excellent in pass blocking and could potentially be the best OL in this draft class.

The EDGE rankings may differ to others, and I like Paye as the best EDGE rusher in this draft class. Minnesota could not get to the Quarterback last season, and I love Paye’s motor don’t let his numbers mislead you.

Fields is my QB2 and for him to fall this far would be crazy. If Carolina doesn’t take Fields at No. 8, be ready for the Pats to jump up or see if Fields fall to him just like this.

Ideally, the Cardinals should get a CB to replace Patrick Peterson who’s now in Minnesota. Farley is still there, but his recent back procedure is scaring teams away—the Cardinals may be one of them. So, grab another defender with Collins at No. 16. He’s versatile and athletic, seeing him with Isiah Simmons would be nice.

Parsons has some off-the-field character issues that’s questioning how far he could possibly slide. He’s a top-10 talent for sure and Jon Gruden may not see and offensive lineman that he could get here.

Phillips pro day could possibly make him the top EDGE rusher to be drafted on Thursday night as well. He has a lot of medical red flags as well, but has the potential to be a good player.

Vera-Tucker is one of the most versatile lineman in the draft. He played tackle, but he may be even better inside. Washington would love him here.

If one of the quarterbacks do continue to slide, Chicago may try to move up in the draft to take one, but Matt Nagy and company are also on the hot seat and need another playmaker to help an offense who was very pedestrian.

Former LT Anthony Castonzo has retired so this is perfect for them to go Jenkins here to replace him. Join one of the better offensive lines and protect Carson Wentz.

The Jets need a pass rusher. I was stuck between Oweh or Texas’ EDGE rusher Joseph Ossai. I like Oweh just a little bit more because he has more of a twitch and I think he can excel in new Head Coach Robert Saleh’s defense.

The Steelers could also go edge here as well, but they also have a lot of departures from the offensive line. Big Ben needs to be protected and the line needs to be better in the run game. Pittsburgh can address running back on day two.

Jacksonville needs help in the secondary it has not been the same since they traded away Jalen Ramsey. I think taking the best Safety would be better than the fourth CB or if you don’t trust the medical on Caleb Farley.

The biggest question for JOK is where do teams look at him as a Linebacker or Safety. Cleveland could use his versatility on their defense who’s great on the front and back ends.

The Ravens have this pick and the 31st pick after dealing Orlando Brown to the Chiefs. They desperately need a pass rusher due to losing Matt Judon and Yannick Ngakoue. Ojulari isn’t the biggest out of all the edge rushers, but his quickness and explosiveness can help him beat those slower tackles who don’t get off the ball as quickly as him.

The Saints need help at corner to pair with Marshon Lattimore, and although teams are shying away from Farley I think the Saints are hoping that he slides right into their hands.

Green Bay shocked everyone last year with moving up to take QB Jordan Love instead of grabbing a WR to give Aaron Rodgers another weapon. I don’t think the Packers will make that mistake two years in a row. Bateman is an excellent route runner, has great hands, and can help with improvisation. What quarterback does that the best? Yes, you guessed it.

If Pittsburgh doesn’t go RB at 24, the Bills are running to the table to turn in this pick. Buffalo was awesome in the passing game with Josh Allen, Stefon Diggs and company, but the run game was very lack-luster. This would be the perfect pick for Buffalo if they want to continue to be among the elite teams in the AFC.

Baltimore did sign Sammy Watkins but wide receiver is still a need. A big body receiver to be more specific, and Marshall is the guy. He has good speed as well, I think he’s a great fit for the Ravens.

Tampa Bay has brought back everyone from their Super Bowl run—which is rare. Do they really need anything? If they stay at No. 32 take Rousseau—he’s a raw talent and his 2019 season was a great one with 15.5 sacks, but he is lean and not that physical so Rousseau could be just a project. He’ll be under the tutelage of some great defensive lineman in Tampa.