Paul George is the No.1 Option

This young season has been up and down for the Los Angeles Clippers (7-6) in just 13 games. With all the expectations in the early going, the hopes of bringing their first championship to this franchise is in their sights.

Superstar Kawhi Leonard was expected to return fully healthy this season. The two-time Finals MVP missed all last year as he recovered from a partial ACL tear in the 2021 NBA playoffs. Back in the 2019 offseason, Leonard was chosen to go along with all the other veterans and pieces head coach Ty Lue had assembled. Since then, it hasn’t been what they’ve expected. With all the different players in and out of the lineup, it’s been difficult for coach Lue to maintain team camaraderie.

On The Shoulders Of Paul George 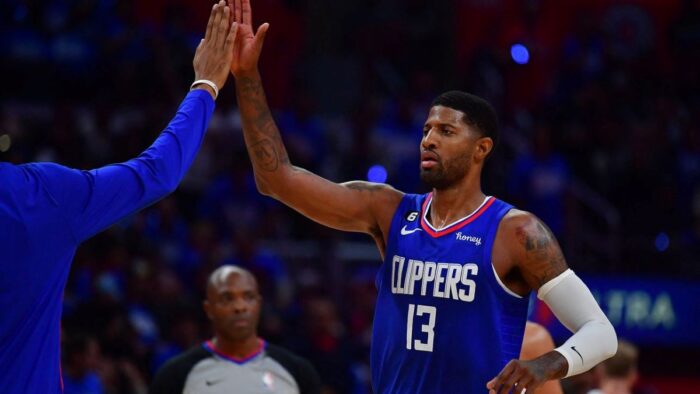 The excessive absence of Kawhi has caused 32-year-old Paul George to carry the load and lead the offense. Prior to the start of the NBA season, George came out and told the Clippers and the rest of the world he had no problem taking a back seat to Leonard.

“Kawhi is number one, and I’m totally fine with it,” George said. “Everybody say Kawhi and you are one and one, or 1A and 1B, I’ll publicly say I’m the two. Kawhi is the one, I’m the two. So that part we nipped in the bud. There’s no ego when it comes to that. But with that being said, I believe in my talent and what I do. I believe on any night in what I’m capable of.”

Before Saturday’s loss to Brooklyn (110-95), they were 5-1 in the previous six games and trending in the right direction according to coach Lue. After four straight losses a few weeks into the season, George vowed to be better.

“It starts with me. I was poor tonight (after the 122-91 loss to New Orleans). I’ve been poor the last couple games. I’ll get it together. I’m committed to my work, I’m committed to this team succeeding.”

Taking Matters Into His Own Hands

He turned the corner after that loss and his play over those next six games were superstar numbers, averaging 30.6 points in that stretch while shooting 56% from the field. His performance named him Western Conference Player of the Week in that stretch. His performance over that span has been done with teammates in and out of the lineup. Most notably in the absence of Leonard, who has only appeared in two games thus far.

Without Leonard, George has taken his game to another level, and it was required of him according to coach Ty Lue. After their 95-93 win against Houston, Lue was asked if those performances is what they need from him (George). “Hell yeah,” he responded.

Last Friday, Leonard participated for the first time in 5-on-5. Hopefully there’s confidence in his return sooner rather than later. He’ll have to work his way back into game shape. More importantly, Leonard needs to build the rapport with his teammates. They’ve been out battling each game since he went down.

As of right now, there’s no definitive timetable for Leonard’s return. Nevertheless, this team will continue to believe in George’s ability to carry this team. Although there’s the aforementioned remark of how he said he’s the “two,” his capability to wield his team to victory with his play earns him the right to be the number one option. Until someone else (Leonard) comes in and shows they can perform consistently and stay healthy, this is George’s team to lead.