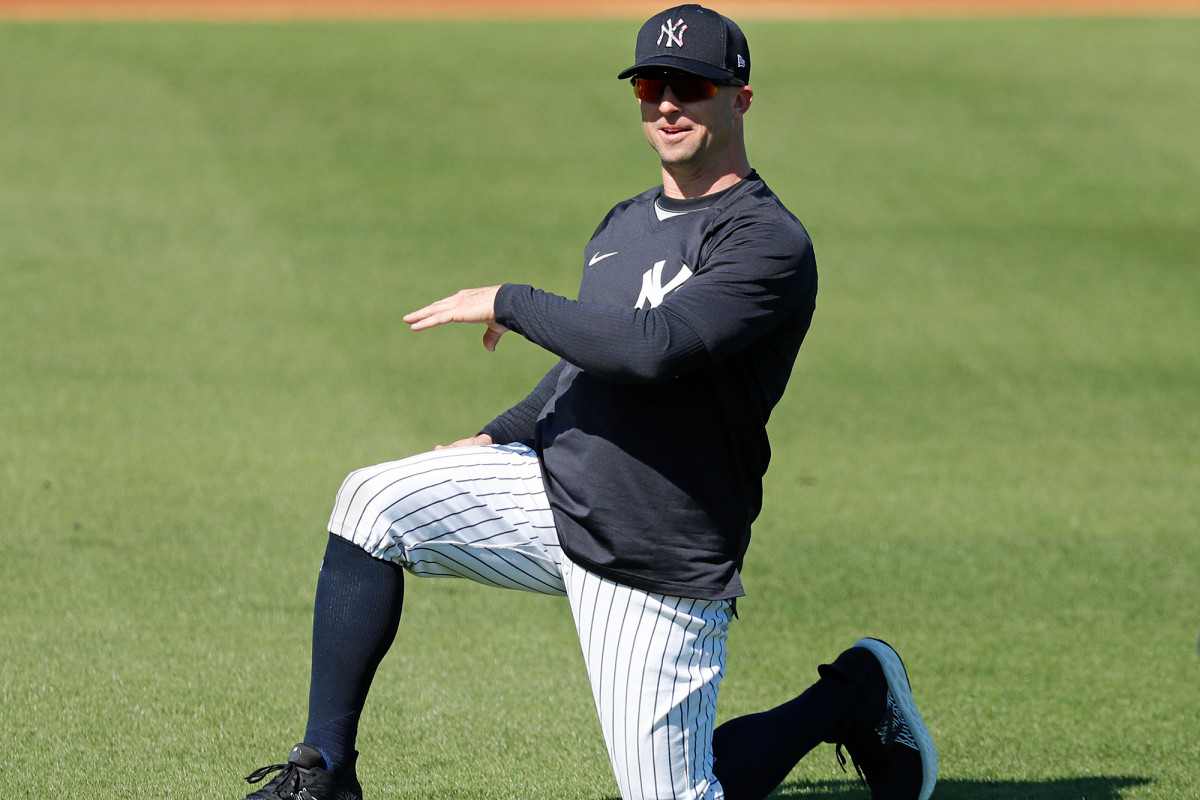 The New York Yankees must decide if they want to call up veterans or give their younger players a chance on the bench in 2021.

Over the next month, the New York Yankees will decide on the players who will comprise the bench on the Major League roster. Brett Gardner is all but guaranteed to start the season on the bench, as manager Aaron Boone has already named Clint Frazier the starting left fielder. Therefore, there are three remaining bench spots. The most likely candidates to make the Opening Day roster include C Kyle Higashioka, C Robinson Chirinos, OF/1B Jay Bruce, 1B Mike Ford, UTL Derek Dietrich, UTL Tyler Wade, OF Mike Tauchman, and 3B/LF Miguel Andújar.

First, let’s start with the catchers. The Yankees need a catcher to split time with Gary Sánchez. While Sánchez should receive the lion’s share of the playing time, the second-string catcher will play in his fair share of games. Higashioka has been in the Yankees system since 2008 and has no more minor league options. Thus, it would be hard to imagine the Yankees parting with the former seventh-round pick.

Furthermore, Higashioka was brought up to The Show for his sneaky pop, and defense. The Yankees are especially keen on the latter, as Higashioka became the personal catcher for Gerrit Cole last season, and is a quality framer. Higashioka also stole playing time away from Sánchez in the playoffs last year thanks to his offensive improvements. Although Sánchez lost playing time because he was underperforming, Higashioka still deserves credit for winning the starting catcher nod in the postseason.

Still, Higashioka will be challenged for the backup catcher role by Chirinos, an eight-year veteran. Chirinos came off his best season in 2019, as he hit 17 homers in tune with a .790 OPS. However, the 36-year old backstop had a downtrodden 2020 season. Chirinos has mixed projections for the upcoming season. He could bounce back this season as indicated by his shockingly low .208 BABIP, but a lowered walk rate and a sharp decrease in exit velocity indicate that father time has caught up to him.

Besides, Chirinos is not the catcher the Yankees are looking for. Sánchez is recognized for his offensive ceiling but has consistently allowed too many balls to get away from him. In other words, the Yankees are looking for a defensively-minded catcher, and Chirinos is regarded as a bad defender who cannot frame very well. Even though Chirinos caught Cole when they were teammates on the Houston Astros, that will not be enough to win the backup role from Higashioka.

After Higashioka, the Yankees have plenty of players to win the last two spots. The Bronx Bombers lineup is predominantly right-handed except for Gardner and Aaron Hicks. Indeed, there is no coincidence that nearly all the candidates are left-handed. In all likelihood, the Yankees would like another lefty slugger. By this logic, one player can already be eliminated from this list: Miguel Andújar. Because he is a right-handed hitter and plays awful defense, Andújar will not make the 26-man roster.

Out of the remaining players, Bruce is the most fearsome power hitter. Bruce has racked up 318 homers in his career and is just a year removed from walloping 26 round-trippers in 98 games. Even though Bruce batted a paltry .198 last season, he still managed to produce an eye-popping .271 ISO. The former Cincinnati Red is a liability in the field, but he can still man the corner outfield positions, and backup Luke Voit at first base. Regardless, if the Yankees truly want a player to utilize the right-field porch in Yankee Stadium, Bruce would be their best bet.

Sadly, if the Yankees add Bruce to their bench, they will no longer require another backup outfielder. Incidentally, Mike Tauchman, who only plays the outfield, is out of minor league options, and the Yankees would have to designate him for assignment or trade him. Tauchman brings speed, defense, and sneaky pop to the table, but that will not be enough to make the big league roster. With Gardner, Bruce, and Giancarlo Stanton able to handle the outfield grass, Tauchman becomes the odd man out.

Additionally, Ford will not make the big league club open the season. Similar to Bruce, Ford can crush baseballs at Yankee Stadium. He smashed 35 homers between Triple-A and the big leagues in 2019. Ford is certainly impressive and will be a nice piece in the Yankees system for years to come, but he needs more seasoning in the minors before earning the backup gig. As mentioned, Bruce not only plays first base, but the corner outfield positions as well, so the 13-year veteran adds more versatility to the bench. Barring a ridiculous Spring Training from Ford and a poor preseason from Bruce, Ford will begin the 2021 campaign in Scranton.

With Bruce entrenched as the third bench player, the last two players up for the final spot are Dietrich and Wade. These two players are very different, and the outcome of this battle will mostly depend on Dietrich’s performance during Spring Training. Wade has been in the Yankees organization since 2013 and is considered a light-hitting speedster with slightly above-average defense. Essentially, the Yankees understand how to utilize Wade at the Major League level. Dietrich, on the other hand, shows promise with the 35 home runs he hit between 2018-19. Yet because he is a below-average fielder, and hit below the Mendoza Line the last two seasons, Dietrich will need to have a strong Spring Training.

Another factor in this competition will be what type of player the Yankees would have on the bench: a fast, stalwart defender, or another strong lefty hitter. The Yankees already have Gardner on the bench and his speed is just a tick slower than Wade. Additionally, in this scenario, the Yankees have Bruce on the bench, so they do not necessarily need Dietrich to supply the power from the left side. Either way, Wade or Dietrich would be useful options on the bench.

The Yankees will also have to consider where to move their starters when Wade or Dietrich enter the lineup. Wade can hold down second, short, or third, so he can come in as a straight substitution, or if he plays second base then DJ LeMahieu can move over to first. Consequently, if Dietrich plays on the infield, he can handle first, second, and third, but not shortstop. Therefore, when Torres has a day off, LeMahieu or Gio Urshela would have to slot in at shortstop. Boone has said LeMahieu can manage shortstop, and Urshela spent some time in the 5.5 hole when he was with the Indians, but this situation would put LeMahieu or Urshela out of position.

Subsequently, the Yankees will need a viable backup to have a decent amount of playing time. Urshela, Torres, LeMahieu, and Voit cannot play the infield every day. As previously mentioned, Wade plays all around the infield but sports a .575 OPS. Thus, Wade is best used as a late-inning defender/runner. Meanwhile, Dietrich owns a sub-.200 batting average in the last two seasons but managed to post a .790+ OPS in both years. As a result, Dietrich should make the team over Wade since he has better career numbers. Fortunately, Wade has one minor league option left, so the Yankees can start him in Triple-A and make room for Dietrich on the Major League roster.

Any of these players vying for the bench spot could be on the 26-man roster. Nonetheless, having a bench consisting of Gardner, Higashioka, Bruce, and Dietrich would be the best players suited for a backup role.